New Delhi: The world moved a step closer to developing an enduring defence against AIDS after researchers in Thailand unveiled the results of a vaccine trial on Thursday that cut the risk of becoming infected with the HIV virus by nearly one-third and will not lead to secondary complications. 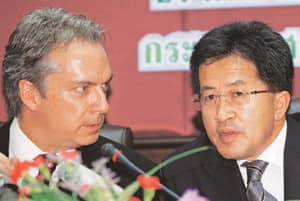 The trial of the vaccine, RV144, disclosed a 31.2% vaccine efficacy in preventing HIV infections in the third phase of clinical trials. Phase III is a late-stage trial conducted on a large number of human volunteers. The trial in Thailand involved 16,395 adult male and female volunteers. No vaccine safety issues were observed in the trial.

“These results have instilled new hope in the HIV vaccine research field and promise that a safe and highly effective HIV vaccine may become available for populations throughout the world who are most in need of such a vaccine," said the statement issued by WHO and UNAIDS.

The vaccine used two different candidate vaccines developed by Sanofi-Pasteur SA and the non-profit organization Global Solutions for Infectious Diseases, and the clinical trials were performed by the Thai ministry of public health, sponsored by the US Army Surgeon General and received funding from the US National Institute of Allergy and Infectious Diseases and the US Army Medical Research and Materiel Command, department of defence.

“The outcome is very exciting news and a significant scientific achievement," said Seth Berkley, president and CEO of International AIDS Vaccine Initiative (IAVI), adding that this is the first demonstration that a candidate AIDS vaccine provides benefit to humans.

WHO and UNAIDS began supportive work for this trial 18 years ago, in 1991, when Thailand was recommended as one of the WHO-sponsored countries in preparation for HIV vaccine trials and the development of the National AIDS Vaccine Plan.

However, UNAIDS country coordinator for India, Charles Gilks, cautioned that this would not mean that a vaccine for AIDS would be available any time soon.

“This is very exciting news. Finally a vaccine has shown about 30% efficacy and that is cause for celebration. Though the efficacy is quite low, it gives hope that with more research we can have 50-60% efficacy," he said.

Gilks added that though the vaccine would not be available immediately, one was possible in a decade’s time, if this preliminary data holds up.

The RV144 vaccine is only the third AIDS vaccine candidate to complete efficacy testing. According to WHO and UNAIDS, a lot more work still needs to be done on the vaccine by the principal investigators and international collaborators to analyse the trial data, understand the protective mechanism, determine the duration of protection and map the next steps.

It also remains to be seen if the two components of the vaccine would be applicable to other parts of the world with diverse host genetic backgrounds and different HIV subtypes driving different regional sub-epidemics.

“Whatever the next steps are for this vaccine candidate, they will require consultation among scientists, policymakers, community members, regulators and, of course, the partners in this trial," said Rajat Goyal, country director of IAVI-India.

IAVI, along with the Indian Council of Medical Research and the National AIDS Control Organisation, is co-sponsoring a phase-I clinical trial in India of a different AIDS vaccine candidate.

“The studies in India are not designed to determine whether a vaccine will prevent HIV infection, they are smaller studies to test for safety and get preliminary information on how the immune system responds," explained Goyal.