New Delhi: India’s monthly headline inflation touched a 16-month high of 9.89% in February as prices of more products went up, increasing the probability of a hike in policy rates by the central bank in its quarterly review on 20 April, if not earlier.

During the corresponding month last year, the inflation rate stood at 3.5%. The last time the country witnessed double-digit inflation was in October 2008, when it was 11.8%.

The impact of the latest numbers was immediate in the money markets. Yield on 10-year benchmark government bonds ended at the day’s low of 7.99% from Friday’s closing of 8.01%.

The highlight of the numbers released by the Department of Industrial Policy and Promotion (DIPP) is that, as feared by some analysts, food inflation has started spilling over to manufactured products. While food inflation is still the major driver of wholesale price inflation at 17.8% in February, inflation of manufactured items accelerated to 7.4% from 1.6% in October last year.

The December inflation rate was revised to 8.1% from provisional estimates of 7.31%. 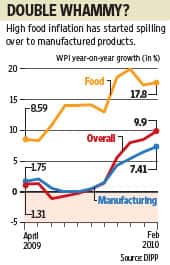 In its macroeconomic review in January, the Reserve Bank of India (RBI) said pressure on headline inflation from high food prices could be transmitted over time to other non-food items. The possibility of surges in capital inflows and the associated domestic liquidity conditions could affect inflationary expectations, as could the impact of the rebound in international commodity prices, it had said.

“I would expect another month of inflation roughly like this because the base effect is going to be very strong...after that inflation should begin to die down," chief economic adviser Kaushik Basu told reporters. His reference is to the corresponding period last year when inflation was low, making the current rate of increase higher.

Other experts, too, expect inflation to slow.

“One expects inflation to come down as the base effect wears out after April. However, much would depend on what happens to food and fuel inflation," said chief statistician Pronab Sen.

Rohini Malkani, economist at Citigroup India, said in an advisory on Monday that assuming a normal monsoon, the fading base effect and a healthy winter harvest, inflation is expected to come off from double-digit levels. However, given the growing influence of structural factors, the Wholesale Price Index could likely remain in high single digits rather than the preferred range of 5%, she said. “This, in turn, could potentially keep the rate structure higher," she added.

Malkani expects RBI to raise policy rates by a minimum of 125 basis points (bps) in 2010, with a first hike in its policy in April. A basis point is one-hundredth of a percentage point.

Factory output grew 16.7% in January, rising at double digits for the fifth time this fiscal year.

Tushar Poddar, vice-president and chief economist at Goldman Sachs (India) Securities Pvt. Ltd, said in a report that the probability of a rate hike before the policy meeting has increased. “We continue to expect RBI to begin withdrawing liquidity through the cash reserve ratio (CRR) of banks and to hike rates by 50 bps by the April 20 policy meeting," Poddar said. “Cumulatively, we continue to expect RBI to hike effective policy rates by an above-consensus 300 basis points in 2010."

However, Sen cautioned against a rate hike. “A rate hike makes sense if the inflationary pressure is demand-driven. I am not sure that is the case as yet. One needs to be careful with a rate hike in such a scenario. One would be better off to focus on liquidity management." RBI had raised CRR, the amount of money that banks need to keep aside, in its January policy review by 75 bps to suck out Rs36,000 crore of liquidity from the system.

Reuters and PTI contributed to this story.