New Delhi: Keeping in mind the forthcoming presidential election, the Congress-led United Progressive Alliance (UPA) took a series of decisions on Thursday aimed at benefiting states that the ruling coalition is banking on to support its candidate, Pranab Mukherjee.

A day after the Union government cleared a ₹ 45,000 crore package for Uttar Pradesh, the cabinet committee on infrastructure (CCI) approved a ₹ 647.98 crore national highway project in the politically crucial state.

In a development that looked like the political fallout of this decision, key ally Trinamool Congress (TMC) blocked a Bill to give more powers to the Forward Markets Commission (FMC), the commodity market regulator. Railway minister and TMC leader Mukul Roy had written to Prime Minister Manmohan Singh on Wednesday evening just a few hours after the Union government decided to approve the financial package for Uttar Pradesh, expressing his party’s reservations on the Forward Contracts Regulation Act (Amendment), or FCRA, Bill. 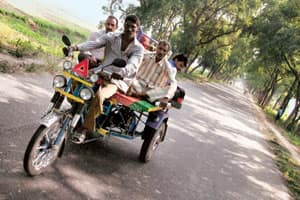 While a Congress minister said the TMC’s move was “political" and that it had blocked the Bill “just for the sake of opposing it", TMC leader and minister of state for urban development Saugata Ray said the allegation was “unfounded".

“Mukul Roy wrote to the PM requesting to defer the FCRA Bill because he wanted to be present in the cabinet meet when it is taken up to put our views forward," Ray said. The FCRA amendments are aimed at allowing the introduction of options trading, among other things

The decision to defer the item on the cabinet agenda as requested by the TMC should be seen as an attempt by the ruling party to accommodate the sulking ally, said two Congress leaders aware of developments.

“The Congress is of the view that it is not yet time to rupture ties with the West Bengal chief minister. We want the TMC to back us in both presidential and vice-presidential elections," said one of the two leaders.

According to these leaders, the party has not announced its vice-presidential candidate because it wants to know whether Banerjee would come around and support Mukherjee in the 19 July presidential election and the person it chooses for the 7 August vice-presidential poll.

“Although the other allies have agreed to back vice-president Hamid Ansari for a second term, the party wants to keep the options open for Banerjee, and it is ready to offer an olive branch by proposing another candidate acceptable to the TMC too," said one of the leaders cited above. Neither of them wanted to be identified.

Banerjee had chosen to suggest her own presidential nominees, including Prime Minister Singh and former president A.P.J. Abdul Kalam, in defiance of the Congress selection. Banerjee hasn’t pledged her support to Mukherjee’s candidature nor has she done so to his opponent P.A. Sangma.

The Congress is expected to officially announced its vice-presidential candidate at a UPA meeting on Saturday.

National highway 231, approved on Thursday, will link Congress party chief Sonia Gandhi’s Rae Bareli constituency with Jaunpur at an estimated cost of ₹ 647.98 crore, out of which ₹ 78.62 crore will be for land acquisition, resettlement and rehabilitation, and pre-construction, and ₹ 569.36 crore for construction.

The total length of the project will be 166.4km covering the districts of Rae Bareli, Chhatrapati Shahuji Maharaj Nagar, Pratapgarh and Jaunpur, and the concession period will be 17 years, including the construction period of 24 months.

“The main object of the project is to expedite the improvement of infrastructure in the state of Uttar Pradesh and also in reducing the time and cost of travel for traffic, particularly heavy traffic, playing between Rai Bareli—Jaunpur," said a government statement. “It will also increase the employment potential for local labourers."

The cabinet committee on economic affairs deferred a decision on selling a 10.82% stake in Steel Authority of India Ltd as steel minister Beni Prasad Verma was away to Tokyo on an official trip.

In order to ensure timely completion of projects undertaken in the public-private partnership (PPP) mode, CCI cleared a proposal to set up an institutional mechanism to oversee contract performance effectively. The Institutional Mechanism for Monitoring of PPP Projects will have a two-tier system—a projects monitoring unit (PMU) and a performance review unit (PRU). The proposal, mooted by the Planning Commission, has been cleared at a time when increasing reliance is being placed on PPP projects across many wings of the government. “It has become necessary to adopt a well-defined institutional structure for overseeing contract performance effectively," an official note said. “This is all the more necessary as concessionaires will have an incentive to cut corners whereas the criticism would be faced by the government."

The PMU will monitor the performance of PPP projects at the project authority level, and the PRU at the ministry or state government level, as the case may be. The PMU is to prepare a report to be submitted to the PRU within 15 days of the close of the relevant month. The report is to cover compliance, adherence to timelines, assessment of performance, remedial measures, imposition of penalties, etc., the statement said. The PRU will review reports submitted by different PMUs and oversee or initiate action for rectifying any lapses. In addition to this, respective ministries will be asked to send a quarterly compliance report to the Plan panel and the finance ministry.