Govt puts the squeeze on I-banks

Govt puts the squeeze on I-banks

Mumbai / Kolkata: Investment bankers bidding for the mandate to sell shares in public sector companies may end up spending from their own pockets following a change in the rules for selection of advisers on the government’s asset sale programme. New norms: NTPC’s Gandhar power plant in Gujarat. Banks involved in selling the utility’s proposed follow-on public offering are said to be paying a substantial sum from their own pocket towards issue expenses.

Until now, investment banks have been offering their advisory services free, but advertising costs, legal fees and other incidental expenses were borne by the government-owned firm selling shares. Under the new norms, investment banks would have to bear these costs, and to recover them from the government, they must include the expenses in their bids for the mandate.

Competition would force investment bankers to bid as low as possible and, in the process, bear a part or even all the expenses, as mandates for big-ticket public sector divestments help them climb up the league tables, said an investment banker involved in the bidding process. Typically, investment banks charge 1-3% of the amount raised through share sale of private sector firms.

Another investment banker familiar with the proposed follow-on public offering, or FPO, of NTPC Ltd, the country’s biggest utility, said banks involved in selling the issue were paying a substantial amount from their own pockets towards issue expenses.

“If the government continues to force the banks to pay out of their pockets, it may not not be easy to get investment bankers to sell shares for all public sector undertakings," said the investment banking head of a foreign bank. 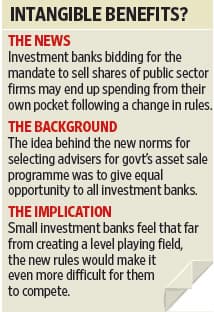 None of the bankers was willing to be identified, considering the sensitivity of the issue.

The government is expected to divest its stake in NTPC, National Mineral Development Corp. Ltd, Satluj Jal Vidyut Nigam Ltd and Steel Authority of India Ltd through FPOs and Bharat Sanchar Nigam Ltd and Rites Ltd through IPOs in the next few months.

Defending the government’s stance, a finance ministry official said the idea behind the change in norms was to give equal opportunity to all firms.

“It was no big deal for the big players to quote zero fee because they had more people, whereas the smaller players, though good at their work, couldn’t afford to deploy people for assignments from which they earned nothing," said the finance ministry official, referring to the old norms when the advisory fee was effectively zero but actual issue expenses were taken care of by government-owned firms.

The new rules will change the dynamics of the game.

“Under the new dispensation, the smaller players would get an opportunity to compete with the bigger ones—say if they could cut issue-related expenses such as printing and advertisement, they could make some money out of these and profit from the mandate even if it is a very small amount," he said.

The aim is to expand the pool of investment banks that advise the government on share sales.

“We are going to sell shares of some 60-70 companies over the next two-three years. How can we let only a handful of investment banks handle such a huge mandate and profit from it? We have to create a level playing field, create profit opportunities for small investment banks and encourage them to bid for government mandates," he said.

However, smaller investment banks are of the view that far from creating a level playing field, the new rules would make it even more difficult for them to compete.

“The bigger investment banks would offer discounts on costs as well," said a Kolkata-based investment banker, who, too, did not want to be named. “It wouldn’t solve our problem one bit… It would only benefit the government. Because of competition among investment banks, issue-related expenses would go down substantially."

According to him, the government has now realized what it means for an investment bank to advise the government on a large share sale, and so has devised a mechanism which would force them to pay to secure mandates.

Typically, the government follows a two-round bidding process for engagement of book-running lead managers for the disinvestment programme.

In the first technical round, the applications from investment banks are shortlisted on the basis of their capabilities on eight broad parameters, including sector expertise, understanding of the company, experience in handling similar transactions, distribution network and research capability.

In the second round, the winners are selected on the basis of their financial bids. Here the competition is fierce and many investment bankers would like to show very little issue expenses as a mandate for the government divestment programme gives them prestige, opens many doors at high levels and helps them climb the all important league tables.

“It is only fair and moral to pay fees to the banks. At least 0.5-1% should be split among all investment bankers. The current system is squeezing the bankers," said Prithvi Haldea, chairman and managing director of Prime Database, a Delhi-based primary market tracker.

Companies are allowed to spend a certain percentage of the money that they raise from the public as issue expenses, but there is no set formula for this. Typically, companies floating large equity issues spend about 1.5% of the issue size as expenses for selling the issue but this goes up for smaller issues.

The recent issues of Oil India Ltd, a public sector undertaking, and Adani Power Ltd are a study in contrast in terms of investment bankers’ fees.

In addition, there was an underwriting and selling commission of Rs2.37 crore, shared with brokers and banks which help sell the float.

Adani Power, which hit the market in August with a Rs3,000 crore float, spent Rs64.5 crore on issue-related expenses. Of this, 66%, or Rs42 crore, went towards the investment bankers and underwriting commission—roughly 1.4% of the total issue size.

Yet another attraction for managing IPOs is the free money or float that the banks enjoy on account of the time gap between subscription to a public issue and its listing, but this is also fast vanishing.

Most IPOs are subscribed many times and, typically, the time between an investor putting in money for investing in an IPO and getting a refund after the shares are allotted is three weeks. Till recently, bankers to the issue used to enjoy this money free but not any more, following the introduction of a process called application supported by blocked amount, or Asba, by the capital market regulator.

Under Asba, when an investor applies for an IPO through the banking channel, the money does not leave the account till the shares are allotted. Until now, only retail investors have been enjoying this facility, but from 2010, high networth individuals and corporations can use this facility and this will further reduce the float.

An official with one of the leading registrars who maintain subscription and allocation details for IPOs blamed the investment bankers for the situation they have dragged themselves into.

“In the eagerness to be associated with the government issues for various intangible benefits, they drastically undercut each other. They volunteered to do it this way in times of boom and are now facing the music," he said.