Mumbai: Sanjay Sawant splurged Rs12,000 on a SamsungCorby smartphone recently, and signed on with telecom firm Aircel Ltd for a Rs99 a month plan that allows him to access the Internet on his phone. 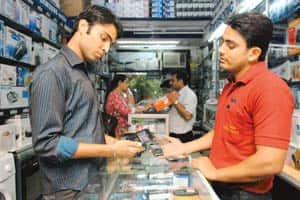 Always connected: Cheap Internet plans and the comfort of qwerty keypads can be attributed to this surge. Ramesh Pathania/Mint

“I want to make new friends and I can now do that on my phone," says Sawant.

Sawant’s purchase and the motivation behind it mark a new trend in India, of the social networking phenomenon driving demand for smartphones, mostly with qwerty (or full) keypads, among segments once not considered as markets for such phones: teenagers still in school and college and young people in large cities; and young people (under the age of 25) in small cities and towns.

According to Mahesh Narayanan, country manager, India, at AdMob Inc., one of the world’s largest mobile advertising networks, the number of people accessing the Internet on mobile phones, and those using smartphones to do so, have both doubled over the past year, the first to 25 million and the second to around 7.5 million. Narayanan doesn’t have the numbers, but says he believes that a significant proportion of such users are people between 15 and 25 years.

And companies taking advantage of this phenomenon include Research In Motion Ltd (RIM, the makers of BlackBerry) which once targeted corporate customers, and Micromax Informatics Ltd.

RIM has reduced prices, launched new models and even coloured variants and a variety of accessories, even started advertising in mainstream newspapers and television channels to attract so-called retail customers. Micromax has smarphones with qwerty keypads on offer for prices as low as Rs3,750. And telecom firms such as Bharti Airtel Ltd and Aircel Ltd have data (or Internet access) plans starting at Rs99 a month.

Together, these have ensured that the demand for smartphones—pushed by the need and urge to use social networking sites—has been met by a supply of products and services that are priced within the reach of most of the people.

“In our view, it is the typical college and office going crowd in A, B cities, in the 16 to 35 age group, with high usage of social networking sites such as Facebook or Orkut and instant messaging applications such as Google or Yahoo, that’s driving the sales (of qwerty phones)," said Vikas Jain, one of the co-founders of Gurgaon-based Micromax Informatics.

“Currently, qwerty keyboard phones constitute about 25% of our sales."

RIM has also expanded its reach from nine cities to 60 and more than doubled its partnership with telecom firms from four to nine in the past one year.

“We are targeting a larger audience and looking at youth and young professionals in the age group of 16-20 and 20-plus, whose feature-based usage will be higher, as an important segment for us," said a spokesperson at RIM India.

Some telecom firms, too, think similarly.

A telecom industry analyst, who did not want to be identified, claimed that the telco “has become the second largest mobile Internet operator with 85% of its subscriber base using the Internet." According to numbers provided by the Telecom Regulatory Authority of India, Aircel had 34.6 million subscribers as of February 2010.

The number of people accessing the Internet over phone may appear steep, but it rings true, according to an executive at a search marketing firm.

“The new generation (12-17 year olds) are all connected on the Net. They are a data-led generation as versus the older generation, which was voice-led," said Mahesh Murthy, founder and chief executive officer, Pinstorm. Murthy should know. He pays the phone bills for his son, Agni, 12, which are “96% data" and “4% use".

It isn’t just cellphone makers or telecom firms, but even companies in businesses such as consumer goods, education and consumer durables are paying a lot of attention to how young people are using the mobile Internet, said Prashant Mehta, chief operating officer at Komli Media India Pvt. Ltd, a digital advertising and technology company. “They are already on Facebook, Orkut and that is their style of communication."

Lison Joseph contributed to this story.