Muslim politics: At a crossroads

The 16th Parliament has returned just 23 MPs from the Muslim community, the fourth lowest in the history of independent India

The 16th Parliament has returned just 23 MPs (members of Parliament) from the Muslim community, the fourth lowest in the history of independent India. Before this, only the first, second and 10th Parliament had less than 23 MPs. The near-dismal performance of most political parties which have thrived on tapping the minority vote bank in the past is more significant than the representation of Muslims in the Lok Sabha.

The Congress, which has been the first choice of Muslims across India, is struggling to claim the opposition space. Samajwadi Party’s (SP’s) Lok Sabha representation is just an extension of the Yadav clan (Mulayam Singh Yadav accounts for two seats, while his daughter-in-law and two nephews make up the rest); Rashtriya Janata Dal (RJD) has only four MPs; Janata Dal (United), or JD(U), barely managed to avoid the embarrassment of drawing blank; and the Left parties are facing an existential crisis. The three regional players with a good number of MPs are Trinamool Congress, All India Anna Dravida Munnetra Kazhagam and the Biju Janata Dal. Since the Muslim population is not as significant an electoral presence in Tamil Nadu and Odisha, Mamata Banerjee with 34 MPs will be the only party which will potentially continue to use the floor of the Parliament for appeasement politics. Consequently, the minority politics in India is poised to assume a new form and construct; the representation of their interest in Parliament is likely to be more pragmatic than merely emotional.

Historically, the social fabric of Muslims in India has always been part of bhartiyata for centuries and they were as much integral to Indian society as Hindus. The consideration of Muslims as a distinct political category started at the very introduction of the modern democratic system in the early 20th century. The Indian Councils Act,1909, commonly known as Morley-Minto reforms, gave the first taste of democracy to India but it also brought in the provision of “separate electorate" for Muslims. Therefore, Britishers should be blamed for giving the first constitutional recognition to Muslims as “vote bank".

In pre-independent India, Muhammad Ali Jinnah used the identity of Muslims to realise his political ends. However, Jinnah was true to his ideology and seriously worked to serve the interest of Muslims, but in modern India, most of the leaders and parties have tended to use Muslims as vote bank and never made any serious effort to help the community on socio-economic issues. History bears testimony to the fact that Muslims have always shown an extreme degree of commitment to a party which they thought would serve their interests but unfortunately never got more than promises and commissions. A large number of religious leaders from the national to the district level are guilty of this practice. Most of the diktats issued during elections are motivated by the interests of individuals rather than the entire community. The outcome of this election suggests that this may have run its course and the Muslims may have the political space to break out of this stereotyping perpetuated by ulterior political motives.

The results of this election indicate that politics of Muslim appeasement has not worked for most of the so-called secular parties because of the following reasons. Firstly, a section of Muslim youth, who represent aspirations of 21st century India, is no more interested in emotional issues—they want employment and development. Parties like SP, Bahujan Samaj Party (BSP) and RJD were not able to attract such voters because of their dismal governance record. These voters may still not have been attracted to Narendra Modi’s good governance agenda but they made their own choices at the local level, which could have been the main reason for the split of Muslim votes in some of the constituencies of western Uttar Pradesh, where Muslims are the dominant community.

Secondly, despite Modi not touching any issue even remotely connected to Hindutva, one cannot deny that communally sensitive states like Uttar Pradesh, Bihar and Assam did see voting along communal lines. The main reason for such behaviour of Hindu voters was the rather overt Muslim appeasement attempted by some political parties. Empirical evidence suggests that this time the economically less well-off Hindus reacted more sharply to the appeasement politics rather than upper- and middle-class Hindus who previously were more sensitive on the subject. Thus, caste and class divisions within Hindu society blurred, and the Hindu vote polarized.

Thirdly, Muslims on their own cannot elect a candidate unless they strike an alliance with at least one of the dominant Hindu castes. Due to the dominance of governance agenda and soft polarization, such social combinations did not work this time around. 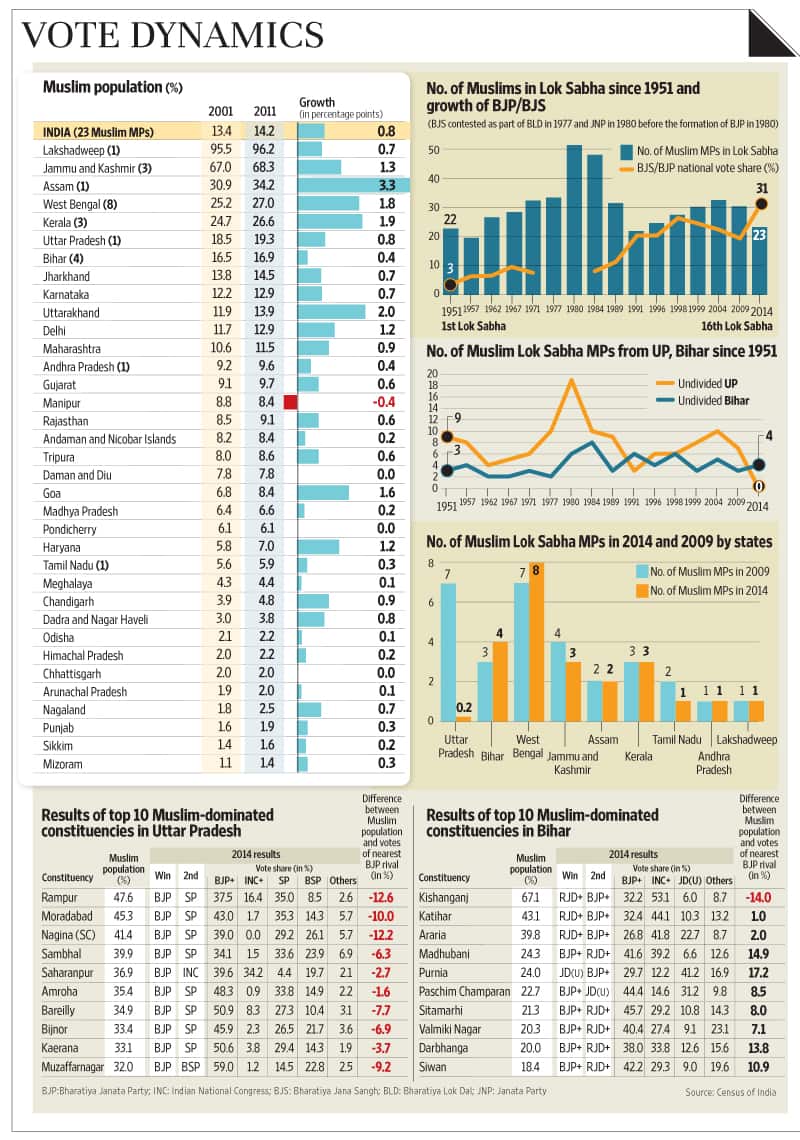 Uttar Pradesh, which had sent 19 Muslim MPs in 1980, failed to elect even one in the just-concluded elections. The Muzaffarnagar riot was the final trigger for communal polarization but this process had started immediately after the state government took charge in 2012. The state government’s special treatment to Muslims accused of terrorism, dozens of micro-level unreported instances of communal conflicts and instructions to police to go soft on Muslim criminals were strategic moves of the SP to consolidate Muslim votes; but it also stoked a counter polarization of Hindus who have largely been politically secular after the 1998 Lok Sabha polls. The impact of the communal agenda of the SP government was such that even the BSP lost a major part of its core Dalit constituency to the Bharatiya Janata Party (BJP).

The failure of successive SP and BSP governments in governance and hard selling of the Gujarat model along with strategic social engineering by BJP general secretary Amit Shah worked as catalyst in polarization of votes in favour of the BJP. Continuous efforts of SP, BSP and Congress to attract Muslims was so fearsome that in several constituencies otherwise smart Muslim voters failed to vote unitedly resulting in a win for BJP in constituencies like Rampur, Moradabad, Saharanpur, Kairana and Sambhal, where Muslims had single-handedly determined electoral outcomes in the recent past.

Though Bihar could still elect four Muslim MPs, the diminished power of Muslim votes is evident from the spectacular performance of the BJP-led National Democratic Alliance (NDA). Closer analysis of voting behaviour suggests that Muslim consolidation in Bihar was far greater than Uttar Pradesh. Both RJD and JD(U) went overboard to appease Muslims but the former emerged as the frontrunner because of its core vote base of 14% Yadavs—aligned with whom Muslims could potentially challenge the upsurge of the BJP.

The impact of Nitish Kumar’s prolonged snub to Modi coupled with mishandling of bomb blasts in a BJP rally and the arrest of Yasin Bhatkal were such that his development-oriented image was not sufficient to stop the Hindu vote from shifting to BJP. Significantly, Dalits and most backward castes, who were smartly cultivated by Kumar as his core vote bank, also opted to vote along with upper caste Hindus with whom they have been in a socio-political conflict for a long time.

It may be worthwhile to recall an experience during one of my field visits to assess the communal undercurrent in Bihar. Ramchandra Mandal, belonging to one of the most backward communities, expressed his anger with Kumar for his policy of giving funds for constructing boundaries around Muslim cremation grounds. Mandal complained that the chief minister ensured that Muslims get respectful burial but what about poor Hindus like him.

Thus Bihar contrasts with Uttar Pradesh. In the case of the latter, governance failure reinforced the reaction to the communal agenda whereas in Bihar good governance could not dilute the negative impact of the appeasement policies. However, Muslims in Bihar were smarter voters with BJP losing in four out of the five mostly Muslim-populated constituencies while it won all the top 10 Muslim-dominated constituencies in Uttar Pradesh.

Need to bridge the trust deficit

With 282 MPs of its own and the unconditional support of another 53 belonging to the NDA, BJP is strongly placed to thwart any attempt of minority appeasement. However, Modi’s continuous stress in his speeches that for him all 1.2 billion citizens were Indian and his refusal to view citizens from the prism of religion or caste should give some comfort to the Muslims. Despite continuous attacks by the opposition, Modi, throughout the campaign, refused to deviate from the agenda of development-oriented inclusive political agenda. Now Modi has to walk the talk.

Already a very strong message has been sent out by inviting Pakistani Prime Minister Nawaz Sharif for the swearing-in ceremony and also by accepting the invitation to visit Pakistan. These developments will certainly go a long way in giving confidence to Indian Muslims, who have strong ties with Pakistan. However, Modi’s efforts will not yield any results unless Muslims also stop being defensive and falling into the political trap of being treated as a special category of voters. Since the emergence of the BJP on the national scene, particularly post 1992, Muslims had a single choice: vote to defeat the BJP. Now time has come that Muslims of this country will have to vote like any other Indian on issues beyond religious identity. This is the only way to bridge the trust deficit between them and the ruling establishment.

During the election, the Forum for Muslim Studies and Analysis of Aligarh University had written to the Election Commission demanding de-recognition of the BJP after the Pakistan barb of BJP leader Giriraj Singh. Let us hope that minority appeasement and secularism as political tools cease to exist and we don’t again witness ugly scenes of MPs shouting Ya Ali and Jai Shri Ram in the Parliament.

The author is a psephologist and director of Research and Development Initiative.