Tata Motors Ltd, the country’s largest auto maker by sales, is finding it difficult to cope with demand for heavy-duty trucks, with buyers having to wait four-six weeks for deliveries.

Such a situation hasn’t arisen in the past few years, said vendors, dealers and fleet operators in Mumbai and Delhi. The company, however, said that the waiting period was typical for this time of year.

Fleet operators and logistics companies may start buying heavy-duty trucks from rival makers such as Ashok Leyland Ltd if the delivery period doesn’t come down. 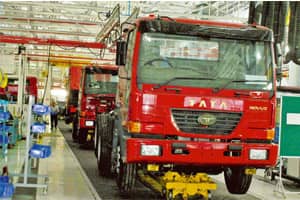 “We have been facing delays in delivery of trucks with large wheelbase and (are) considering buying them from other manufacturers," said a senior official at a Delhi-based logistics firm, who declined to be identified.

Trucks with a payload capacity upwards of seven tonnes are classified as medium and heavy duty.

In the nine months to December, sales of medium and heavy-duty trucks expanded 47.38% to 188,000 as the country’s economy expanded 8.9% in the first half of the year, fuelling capital goods and consumer durables demand, according to the Society of Indian Automobile Manufacturers, an industry lobby.

Transporters said the delay in delivery that they have been experiencing since December hasn’t impacted business, but the uncertainty is affecting fleet renewal and expansion plans.

“There is a continuous requirement of at least five to 10 new vehicles in the fleet per month. But we haven’t been getting them," said Guru Pratap Singh, vice-president of the Bombay Goods Transport Association.

Some transporters indicated that the delay may herald a price increase.

“There are no straight answers for these delays," said a Delhi-based transporter, who declined to be named. “It’s an artificial shortage created by the company to go for another round of price hike."

The head of a Tata truck dealership, one of the biggest in Maharashtra, said the delays began a month-and-a-half ago. He declined to be identified.

In an email response, a Tata Motors spokesperson said: “The months of February and March usually witness more demand every year. There is a marginal waiting period during these months, but that is again generic in nature."

“Over the last 10 months, the company has introduced many new models with additional features and customer benefits," he said. “Since October 2010, we have introduced the Bharat Stage III range (trucks compliant with new emission norms), wherein we have upgraded the power trains to provide higher torque and power along with better fuel efficiency. The market response has been very favourable and we are witnessing strong demand for our products."

In response to whether the firm plans to undertake further price hikes, the spokesperson said Tata Motors doesn’t give a guidance on price hikes.

According to S.P. Singh, senior fellow and coordinator at Indian Foundation of Transport Research and Training, robust freight rates in recent months have left fleet operators with lots of cash that most of them want to use to purchase new vehicles.

Fleet expansion and upgrade plans may have been advanced by factors such as an impending rise in interest rates by non-banking financial companies and banks, Singh pointed out.

The fleet owners, he added, are also anticipating another round of price increases by the manufacturers as the government is likely to roll back the 4% reduction in excise duty, which had been cut as part of fiscal stimulus efforts in December 2008 and February 2009. The sale of such vehicles had dropped from the peak to almost one-third in the second half of 2008.

Earlier this week, at a vendor conference in Chennai, Tata Motors said it plans to produce at least 30% more trucks in February and March, and asked suppliers to ramp up accordingly, said an official from an auto parts firm who attended the meet.

The Tata Motors spokesperson did not elaborate on the plan for raising production, but said: “Higher number of units are planned during these months. So, production is as per plan."

Ashok Leyland, the second largest truck maker by sales, is bullish about demand in the months ahead.

In a conference call with analysts on 24 January after announcing December quarter earnings, K. Sridharan, chief financial officer, said the company plans to close the year ending March with a total sale of 95,000 vehicles, up 48% from last year.

He expected overall truck and bus sales for the industry to expand more than 35%.

Manoj Mohta, head of research at rating agency Crisil Ltd, said commercial vehicle growth may get muted from April onwards as the segment is more susceptible to macroeconomic factors such as industrial production and interest rates on vehicle financing.

He, however, maintained that growth in high-tonnage trucks will continue to outpace the rest of the medium and heavy commercial vehicles even after the current quarter and is likely to expand 13-15% in fiscal 2012.