Even so, growth alone is not enough and challengescurrency volatility, GST and raw material costspersist

UPL Ltd began FY19 on a positive note, reporting double-digit growth in revenue for the June quarter. Contrast that to the first quarter of FY18 and FY17, when revenue grew in the range of 6-7%. The revenue growth comes on an 8% expansion in volume, with the rest due to price and exchange rate variations.

India and Latin America, large business markets for the company, grew in the healthy double digits. Advance order booking in Brazil is encouraging, indicating easing of inventories. Africa and some parts of the Europe did well. India started on a good note and the management expects UPL to see healthy growth during the season.

If sustained, the momentum should help the company report better revenue growth in FY19 compared to FY18 when growth slowed to 7%, impacting the stock. Even so, growth alone is not enough and challenges persist. 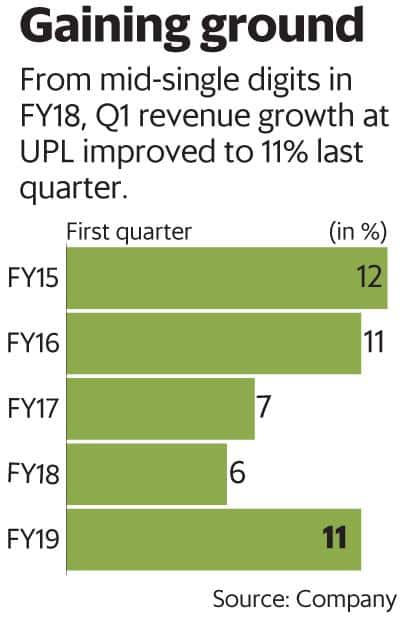 One of them is the continuous rise in raw material costs. Like its peers, UPL has implemented price hikes, but not to the full extent of the rise in costs in all its markets. The company’s ability to pass through the cost increases fully will depend on the quality of growth in key markets. For example, the first quarter is usually a distribution season for UPL in Brazil. Even though the Brazilian currency depreciation is expected to aid farmer realizations, favourable weather conditions are also crucial for the incoming season. North America, which has seen delayed planting, is carrying high inventories, weighing on the sales outlook.

The net impact of this is visible in the company’s performance. Net profit as a percentage of gross revenues softened last quarter from a year ago. The growth in net profit too slowed.

Of course, given that the farming season is still under way, and raw materials and currency dynamics are at play, the revenue translation can vary in coming quarters.

Still, earnings quality is crucial, especially with a large acquisition under way. As pointed out earlier in this column, the acquisition of Arysta LifeScience Inc. is expected to drive up debt in the near term, and the best way to mitigate the impact is to derive the acquisition benefits quickly and use the earnings to reduce the leverage. Hence, it is crucial that UPL does not slip on performance.