Mumbai: The wrangle over an energy deal between India’s billionaire Ambani brothers has highlighted the risks inherent in an economy dominated by big family businesses and spurred calls for the government to intervene. It also tests governance standards for a nation that ranks a lowly 180 when it comes to enforcing contracts on the World Bank’s index on ease of doing business.

The near-three-year battle between Reliance Industries Ltd (RIL), headed by Mukesh Ambani, 52, and Reliance Natural Resources Ltd (RNRL), led by estranged brother Anil Ambani, 50, will be heard in the Supreme Court on 20 July.

The two sides are fighting over terms of a gas-supply agreement struck when the Reliance empire was split in 2005. The Bombay high court ruled last month that RIL should supply gas to RNRL at nearly half the price it had set in an interim order in January.

The gas in dispute comes from the Krishna-Godavari (KG) basin, and some in India have said terms of access to such a crucial resource in an energy-starved country should not be left in private hands.

“If a private MoU (memorandum of understanding) can involve something that belongs in the public domain, it gives the sense that large corporations can bend rules and influence policy—that’s surely got to be the biggest political risk," said Seema Desai, an analyst at risk consultancy Eurasia Group in London. 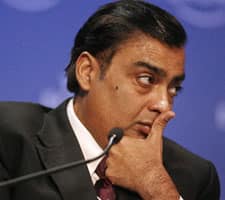 The chief minister of Andhra Pradesh, where the KG basin is located, has also called for New Delhi to step in.

“The dispute over sharing of gas is not an issue to be settled by their mother. It is for the Centre to decide who should get the gas at what price," Y.S. Rajasekhara Reddy said on Sunday, according to The Times of India.

Big business families in India, as in many other countries, have long played an outsized role in the broader economy and have used political patronage to smooth their way. Some analysts say that too much is at stake now for the government to stay silent.

“The government’s call is important...the verdict could have an impact on the gas-allocation policy as it is likely to impact the flow of gas to priority sectors going ahead," Angel Broking wrote in a recent client note. Macquarie estimates the proposed oil and gas production from just 4% of the KG D6 block and Cairn Energy’s Rajasthan block could add $20 billion (Rs97,400 crore) to India’s GDP, cut its oil imports by 23% and add $59 billion in government profit-sharing and taxes. Disputes like this “may dissuade future exploration and exploitation of India’s mammoth upstream potential," it said.

The details of the family settlement, which was brokered by the Ambanis’ mother, Kokilaben Ambani, have not been made public, and at least a dozen issues—ranging from properties to shares in companies—still need resolution, analysts say.

But some expect the rule of law to ultimately prevail.

“Family disputes among corporate houses in India, and the world over, are not new," said Manoj Vohra, director of the Economist Intelligence Unit in India. “The rule of law in India is better than in several developing economies. Opportunities are massive and fundamental in nature and unlikely to be clouded by this slugfest."