This other Peepli of Aligarh is waiting for Aamir Khan

This other Peepli of Aligarh is waiting for Aamir Khan

It’s late afternoon and Singh is sitting outside his home in Peepli, a small village in Aligarh district on the Uttar Pradesh (UP)-Haryana border, surrounded by a motley crowd of young and old men.

Click here to view a slideshow of the Peepli village

The abhineta in question is, of course, actor-producer Aamir Khan. Khan’s latest production, Peepli (Live), about a village called Peepli, is set in a Madhya Pradesh village by that name. However, octogenarian Singh mistakenly believes that the film is about their own Peepli.

Not just Singh, even the gram pradhan of the village Gir Raj Singh believes that Peepli (Live) is the story of their lives. So impressed was he with the trailer of the film (which he and his ilk saw on Forby, a mobile phone that looks deceptively like Samsung’s popular model Corby) that he sent a letter of thanks to Khan. It was a smart move. One that not only got an acknowledgment from the actor, but also sent some local media, print and electronic, from nearby places such as Aligarh, Agra and Delhi rushing to the otherwise nondescript settlement of 800 kuccha and pucca houses.

“Our village also is called Peepli. We are very happy that Aamirji has made a film on our village. The film shows poverty and plight of the farmers. That’s the problem of our village, too. The film’s release will highlight our woes," says Gir Raj Singh in a well-rehearsed tone. He’s pinning his hopes on Khan’s visit to the village, something that the actor’s public relations machinery has promised him, a wish which sadly wouldn’t be fulfilled 24 hours later as the actor would eventually back out, partly due to his illness, partly due to security concerns.

Barely 80km from Delhi, Peepli, lies on the rickety road between Palwal and Aligarh on the Delhi-Agra highway. Faridabad, part of the National Capital Region with its high-rise apartments and swanky malls, is 40 minutes away from here.

While Aligarh’s Peepli grapples with the most basic amenities such as power, upscale malls in the near vicinity boast 24x7 electricity, power backup, central air conditioning, a slew of fast food joints, branded stores, multiplexes and much else. So, even as proof of India’s progress lies barely minutes away, electricity supply in Peepli, say villagers, is an empty promise made by scores of politicians over many years.

In a stark contrast to the glitz and shine of city malls, a light barely flickers in 22-year-old Naresh Singh’s home after an exhaustive exercise. First, he connects a number of wires and a battery to the engine of a tractor. As the tractor whirs to life, a CFL tube lights up.

A similar ritual is played out in another house that belongs to Umesh Singh, an engineering student from Rohtak. It’s one of the richest homes in Peepli with the family earning close to Rs20,000-30,000 a month compared with the average Rs4,000-5,000 that other families earn. He proudly points to a packed refrigerator, one of the many spoils of his dowry, which hasn’t been opened for absence of power. When will he bring home his bride? “I’ll get her home after I complete my studies," he says blushingly.

Both Umesh Singh and Naresh Singh, like many other young men of the village, were married when they were barely in their teens. They are lucky to have found brides. Villagers complain that girls refuse to marry men from Peepli as the village has no power. A young man complains humorously, “I got rejected because the ‘party’ didn’t want to marry off their daughter in this village." Interestingly, with Peepli (Live), claims the gram pradhan, the “marriage market may open up".

While young girls from villages with electricity may be refusing to set foot in Peepli, those that live here are nowhere to be seen. Why? “We love our sisters, we don’t let them out (of the house) unnecessarily" is the standard response. Efforts to talk to a young mother were wasted as she clamped up and disappeared after serving tea. 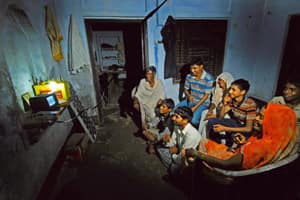 Ray of hope: The Sharma household in front of an 8-inch television set. They work the black-and-white TV set with the help of a solar panel that the family has purchased for Rs2,500 from Ghaziabad. Priyanka Parashar / Mint

Have there been love marriages in the village? An eerie silence interrupts the light banter. “No, we don’t allow any western influence here," says Umesh Singh, 22. Has any boy or girl within the same gotra wanted to marry in the village? “No, that’s not our sanskar. We will never do that," Umesh adds thumping his chest. What if…? “No, it’s never happened," he says in a steely tone only to be matched with an icy glare. Women here also swear by values, morals and ethics, and elderly men claim that even if such marriages were to take place, they would promptly be disowned by the entire village and asked to leave. “No killing, no farmer suicides here, we’re all one happy family," interjects Nathi Singh.

For a village that’s suddenly besotted with a Bollywood offering, it’s ironical that there are barely any homes with television (TV) sets. In a house nearby, Yogesh Kumar Sharma, a young man who has finished his graduation from JK Inter College, Tappal, struggles to connect an 8-inch, black-and-white TV with the help of a solar panel that he recently purchased for Rs2,500 from Ghaziabad. Like him, many villagers are now saving money to buy solar panels to generate electricity on their own. With just two channels appearing hazily on the screen, it’s a marvel how this family of eight gathers around to watch television. “I don’t miss cricket," he says.

Out of the 800 houses, almost 100 possess similar TV sets. Four years ago, when electricity was promised to Peepli, many households invested in colour TV sets, says Sharma. Some even installed dish antennae or bought DTH (direct-to-home) connections. Today, many like Naresh Singh have sold off their new sets to electronic shops in Palwal.

This weekend, Naresh Singh and his friends will watch Peepli (Live) at PVR in Crowne Plaza, Faridabad. They’ll go on a tractor and have already saved money for the trip. “The mall is like jannat (heaven)," he laughs while his friend talks about how he hates leaving the plush seats in the multiplex.

While critics from all over the world praise the film, Aligarh’s Peepli will cheer Khan for other reasons. They genuinely believe the story of Natha is their own.