Net profit exceeded expectations, with 10 analysts polled by Reuters having estimated it at Rs660 crore. Axis Bank Ltd, another Indian private bank that competes with HDFC Bank, had on Monday announced a 31.95% jump in net profit. 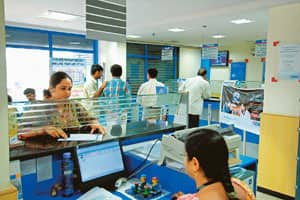 “In the past two quarters, the bank has seen profits being driven by the rise in bonds and fee income," said Paresh Sukthankar, executive director at HDFC Bank. “Asset growth was muted in the December quarter. However, we are seeing loan growth picking up in second quarter.’’

“The banking system as a whole should grow at the 17-18% level. We normally target to grow at a slightly faster rate in the system," Sukthankar told reporters in a conference call.

In the first half of the fiscal year, the bank’s advances have grown 14.8% from an average of more than 30% over the past four years as firms shelved expansion plans. This is, however, much higher than the 3.5% growth that the Indian banking industry has posted in the first half.

The bank’s net interest margin, or the difference between the cost of funds and earnings on deployment of funds, has marginally risen to 4.2% in the September quarter, from 4.1% in the June quarter.

Similarly, there is an improvement in the quality of assets, with net non-performing assets (NPAs) as a percentage of loan book down to 0.5% in September, from 0.6% in June.

HDFC Bank’s total restructured assets, including applications received for loan restructuring but not approved as yet, stood at 0.56% of advances.

“Some corporate accounts that have been restructured could slip into NPAs, but this is not a major threat to the bank as the quantum of loans restructured are lesser as compared to some of its peers,’’ said a banking analyst from a Mumbai-based brokerage house, who does not want to be quoted as he is not allowed to speak to the media.

“We expect credit growth to pick up in the coming quarters and the stock’s higher valuations must be seen in the context of HDFC Bank’s performance across most key parameters, which is better in comparison to that of its peers," said First Global Securities Ltd, in its research report released on Wednesday after the bank announced its earnings.

Narayanan Somasundaram of Reuters contributed to this story.