Recycling what the world throws away

Recycling what the world throws away

Mandi Gobindgarh (Punjab) / New Delhi: Ranveer Jaidka takes pride in his work. “There is a little bit of steel in everybody’s life," he says, smilingly appropriating the tag line of an advertisement.

Skipping gingerly across a blackened factory floor, strewn with practically every sort of scrap from spent shock absorbers and refrigerator doors to crank shafts and bent cycle rims, he proclaims that nothing is waste. Jaidka’s factory in Mandi Gobindgarh, Punjab, is one of the 150-odd factories that recycle metal scrap from around the world.

NPS schemes performance: How your investments are faring

“The WTC (World Trade Center) material was great. High-rise buildings use good quality steel," he says, adding that many factories in Mandi Gobindgarh had bought the debris of the twin towers after the 9/11 terrorist attacks. As much as 15% of the scrap used at Jaidka’s unit is imported. But for an industry that recycles hundreds of tonnes of imported metal scrap every year, information on and control over what comes in and where it is used, is surprisingly low.

Recently, Cobalt 60 discovered in scrap at a Delhi scrapyard caused an outbreak of radiation poisoning and raised questions on monitoring, worker safety and the environmental impact of imported scrap of all kinds. The Mayapuri episode was, however, not an isolated incident.

On 30 September 2004, a blast ripped through the factory of Bhushan Steel Ltd in Ghaziabad, Uttar Pradesh. Ten workers were killed and a few others injured. An inquiry showed the scrap that Bhushan Steel had imported through a Dubai-based trader contained live ammunition that exploded when it was being melted.

Click here to read a blog post by Mint’s senior news editor Nabeel Mohideen on Mint’s decision to run a series on waste.

There was a flurry of activity from the administration, new rules were created and the factories in the area inspected. But the situation soon reverted to normal—Bhushan Steel, with a market capitalization of Rs7,580 crore, has become one of the largest importers of steel scrap in the country.

CBSE Board Exam: No decision on cancellation of state, CBSE board exams

A group of angry workers affiliated with the Centre of Indian Trade Unions gathers at their union office in Sahibabad. Upendra Jha of the union maintains that accidents at steel factories are still common. “There have been three in the last six months," he says. Most accidents, he adds, are not reported. 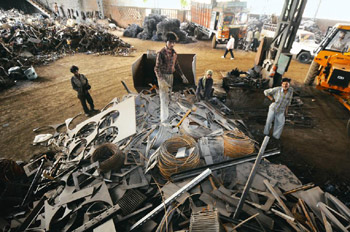 War zone: Mandi Gobindgarh in Punjab has 150-odd factories that recycle metal scrap from world over and notches an average of two accidents a month. Pradeep Gaur / Mint
Share Via
Subscribe to Mint Newsletters
* Enter a valid email
* Thank you for subscribing to our newsletter.