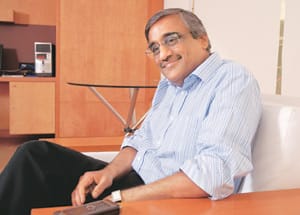 Futile effort: Kishore Biyani of Future Group. The firm was in talks with Carrefour but could not reach a deal. Ashesh Shah /Mint

He also said his company had exited talks with Carrefour after the French firm had signed the deal with Reliance Retail recently.

A top executive at Reliance Retail, who did not want to be named, said the company had been in “preliminary discussions" with Carrefour, but so far no deal had taken place. “We discussed on how we can work together," he said.

Pointing to Reliance Retail’s alliances with the likes of Pearle Europe and Marks and Spencer, a spokesperson for the Mumbai-based company said it keeps exploring potential partnerships with international brands, speciality retailers and service providers, among others.

“We have been, and continue to be, regularly approached by several international as well as domestic retailers, both large and small, for alliances. However, we are currently not engaged in active negotiations with any of the large multi-product international retailers at this time, and as such do not foresee making any announcements in the immediate future," the spokesman said by email. Carrefour India said it will not be able to comment because its managing director Herve Clec’h, who is also the spokesman for the firm here, is travelling.

Kishore Biyani, chief executive of Future Group, and a spokesman for Spencer’s Retail declined comment. Thomas Varghese, chief executive, Aditya Birla Retail, denied that the company had held talks with Carrefour so far. “We have never been in talks with them," he said.

Carrefour is seeking a partnership with Indian retailers to supply them merchandise from its planned cash-and-carry or wholesale stores, one person said.

Bharti Enterprises Ltd, which runs India’s biggest mobile phone services business by customers through Bharti Airtel Ltd, has forged a 50:50 cash-and-carry joint venture with Wal-Mart Stores, Inc of the US while Tata group has signed a technology and sourcing deal with British retailer Tesco Plc.

Carrefour is planning to open its first wholesale store in the National Capital Region, which includes New Delhi and its nearby areas, by the end of fiscal 2010. The store plans will go ahead irrespective of whether the French company is able to forge a local partnership or not, said one of the persons mentioned earlier.

Carrefour is among the world’s top retailers including Wal-Mart, Tesco, and Germany’s Metro AG that have either opened or have plans to roll out wholesale stores in India. India allows 100% foreign ownerships only in this segment of the retail business.

A retail consultant said Carrefour finding favour among Indian retailers stems from both the sheer size of the global chain and the access to technology and merchandising expertise it would bring.

“All of them (the Indian retailers in talks with Carrefour) have done a certain amount of retailing in India and they all know the difficulties and intricacies of retailing," said Jayant Kochar, managing director of consultancy firm Go Fish Retail Solutions. “Obviously, there are values to be gained from a company of Carrefour’s stature."

All four retailers including Future Group, Reliance Retail, Aditya Birla Retail and Spencer’s Retail are yet to announce a tie-up with any foreign multi-brand retailer for selling products ranging from food to furniture.