Farrukhabad (Uttar Pradesh): At first sight, there’s nothing to set apart this small yet bustling town on the Ganga, located near Kanpur in Uttar Pradesh. The chaotic medley of traffic—cycles, scooters, auto-rickshaws, cars, buses and tractors—bouncing along potholed roads could be a scene from any town in India. 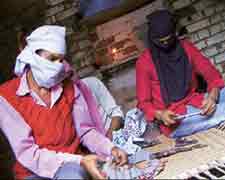 Armed and dangerous: Gun-makers in Farrukhabad. It takes just 4 hours to put a katta together and no special skills are required.

It is famous for so-called country-made guns, crude but deadly and requiring no licence to possess, used to carry out at least five high-profile crimes, including the murder of television journalist Soumya Vishwanathan, in New Delhi in 2008.

According to the National Crime Records Bureau, between 2003 and 2007, an average of 30 people were killed by firearms every year in the national capital and in 75% of the cases country-made weapons, known in local slang as kattas, were used.

The lure of quick money and easy access to cheap weapons has brought criminals from the badlands of Uttar Pradesh to the country’s capital.

About three months ago, Vishwanathan, returning from work late in the night, was shot dead with a country-made pistol. The weapon is yet to be recovered and the investigations have reached a deadend. Earlier in 2008, south Delhi businessman Arun Gupta and 16-year-old schoolgirl Neha Gupta were killed with country-made guns.

“It’s not just illegal firearms that are making their way into the national capital, even criminals from neighbouring states are pouring into Delhi. Criminals will not operate from their native place, criminals living in other states are operating in Delhi," says assistant police commissioner Rajan Bhagat of Delhi Police.

A reporting team from Mint carrying a video camera could interview key people for this story in Farrukhabad on condition that they wouldn’t be identified or their actual neighbourhood disclosed.

Narrow bylanes lead to a small, dingy room next to a stable. The gun-makers walk in confidently, four of them. Before facing the video camera, the men deftly cover their faces with cloth.

“We indulge in looting and killing. We demand money and if refused, we shoot the person, that’s what we do," one of them says casually. He is 26 years old, exudes confidence, and knows his illegal weapons well.

“There may be chances of surviving if you are shot by a pistol or a revolver, but if you are shot by a country-made gun, you cannot survive as the bullet, piercing through the body, will make a huge hole," he claims. “A sophisticated pistol or revolver is expensive, that’s why we use a crude gun. After all it serves the same purpose. If I can kill you with a revolver, I can kill you with this too."

But what’s the biggest advantage of using a country-made gun? “See, if something goes wrong, we can easily dispose of this weapon as it comes very cheap. But disposing of a pistol or a revolver is difficult because it’s very expensive."

“These days kattas are much in demand because unemployment is increasing. So to survive, people have taken to these crimes. It’s easy money. You buy a gun for Rs1,500, and use it to snatch away Rs10,000-15,000," he says.

The gun-makers say it takes just 4 hours to put a katta together and no special skills are required. It’s a family business for many engaged in the trade; if the father is a gun-maker, the son often joins him.

The main work begins at night, they say, because in the morning the threat of the police is more real. All these gun-making units are located in the basements of houses where work goes on all night.

And how do the customers get in touch?

“By word of mouth. We don’t sell these weapons to strangers unless there is somebody whom we trust in between."

On the way back, the Mint team notices a number of men moving on motorbikes, holding double-barrelled guns. It doesn’t seem odd, in this place.

Kattas are making their way into the national capital from places such as Muzzafarnagar, Meerut, Etah, Aliganj, Rampur, Shamli, Farrukhabad and Bulandshahr in Uttar Pradesh and also parts of Bihar and Jharkhand.

Gun-making is a kind of cottage industry in towns across Uttar Pradesh, Bihar and Madhya Pradesh, says former Delhi police commissioner Ved Marwah. “The law and order situation in these parts being what it is, crime has become a very profitable activity. And the easiest way of getting arms ...is to make an illicit arm. It is cheap and effective in committing a crime," he says.

According to assistant police commissioner Bhagat, in an effort to combat the problem, Delhi Police regularly interacts with counterparts in states including Uttar Pradesh, Rajasthan, Haryana, Punjab and Uttarakhand. But the influx of small illegal arms into the Capital continues. Experts say professional criminals favour crude country-made weapons because they can be easily destroyed after the crime.