Home >Home Page >Singh deals himself in to solve crisis

Singh deals himself in to solve crisis

Singh deals himself in to solve crisis

New Delhi: Prime Minister Manmohan Singh has decided to get involved in the effort to get the Capital ready for next year’s Commonwealth Games, seeking to avert a potential national embarrassment on account of shoddy preparations for the country’s biggest sporting event in 27 years. 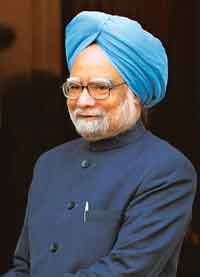 After naming a former civil servant as chief executive officer (CEO) of the Games organizing committee, the Prime Minister’s Office (PMO) on Wednesday seconded two more bureaucrats to the panel, said a senior government official familiar with the development, who didn’t want to be identified.

Jiji Thomson, a joint secretary in the agriculture ministry, and Sudhir Mittal, Punjab government’s resident commissioner in New Delhi, will join CEO Jarnail Singh in the 500-member committee to oversee the preparations.

The government official added that the officials have been asked to firefight to “save the Games".

Thomson said he had not yet received the order deputing him to the organizaing committee. Mittal couldn’t be contacted. Both Thomson and Mittal have had separate meetings with cabinet secretary K.M. Chandrasekhar in the last two days.

An official in PMO said the apointments had been made in consultation with sports minister M.S. Gill, who had discussed the matter with Suresh Kalmadi, chairman of the Games’ organizing committee.

A second official in PMO said the Prime Minister was “deeply concerned" about preparations for the Games. Singh was concerned that if the Games prove to be a fiasco because the Capital isn’t ready in time, it would hurt the country’s prestige and damage its image in the eyes of investors, this official added.

Both officials didn’t want to be identified.

The government official mentioned in the first instance said the Centre had considered other options to complete construction of Games facilities and city infrastructure projects that are way behind schedule.

“There was a suggestion to hand it over to the Armed Forces to complete the projects on a war footing, but it was ruled out as the Commonwealth Games is a people’s event and getting the Armed Forces to do it would invite criticism. Another suggestion was to dissolve the existing committee, which was also rejected because it has too many elected representatives," this official said.

This isn’t the first time that the country’s leadership is stepping in to rescue a sporting event from the risk of disaster. In 1982, then prime minister Indira Gandhi asked her son Rajiv Gandhi, who was then a general secretary of the Congress party, to oversee the organization of the 1982 Asian Games when preparations fell behind schedule. The success of those Games was credited to the organizational ability of Rajiv Gandhi, who became prime minister after his mother’s assassination in 1984.

The Commonwealth Games, scheduled for October, will feature 71 nations and territories that once formed part of the British empire, and will be the biggest multi-sport event to be hosted by India since the Asian Games.

Commonwealth Games Federation head Michael Fennell had sent an urgent letter to the local organizing committee in September citing the lack of progress.

Fennell warned that Delhi faced “an enormous challenge" to be ready for the Games, which will involve 6,000 top-class international athletes competing in 17 sports.

Mint had reported on 29 October that an evaluation by the Comptroller and Auditor General of Delhi’s preparation for the Games found that out of 40 projects, 10 were at high risk and 15 at medium risk of not being completed on time.

Vijay Goel, a member of the organizing committee during whose term as sports minister in the National Democratic Alliance government the Commonwealth Games were allotted to Delhi, is still not hopeful about the smooth conduct of the Games. “I do not think even the Prime Minister’s intervention would make much difference, though it may help in some areas," he said.

Goel is a member of the Bharatiya Janata Party. The Congress, the party’s rival, rules Delhi and heads India’s United Progressive Alliance government.

With time running out, the government may need to spend more money to get infrastructure ready on time, Goel added, citing the risk of projects being awarded without proper procedures being followed and inadequate security arrangements being made.