Washington: India and the US Saturday operationalised the “path-breaking" bilateral nuclear deal as they signed the 123 Agreement, with New Delhi insisting that the accord is “legally-binding" on both sides. 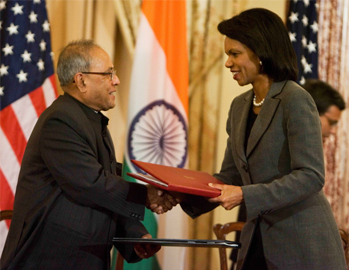 External Affairs Minister Pranab Mukherjee and US Secretary of State Condoleezza Rice put the final seal on the agreement at an impressive ceremony held in the Benjamin Franklin Room of the State Department, culminating a crisis-ridden process initiated on 18 July, 2005 in Washington during Prime Minister Manmohan Singh’s visit for talks with US President George W. Bush.

“Both India and the US Administration have now completed all our internal procedures to be able to sign this path breaking agreement," Mukherjee said after signing the agreement, paving the way for entry of American companies into the Indian nuclear market after three decades.

“Today is an important day for India-US relations, for global energy security and for our common endeavour to promote sustainable development while addressing environmental challenges," he said at the ceremony held at the State Department.

Earlier, Rice said that the 123 Agreement was unprecedented and demonstrates the vast potential for strategic partnership between India and the US.

She said the nuclear deal is not just nuclear cooperation.

“Today we look to the future, a shared future. Let us use the partnership to fight against terrorism, to try a new socialist agenda for the 21st century. India and the US can do all these together. Now there is nothing we cannot do," the Secretary of State said.

Prime Minister Singh “literally risked his political future" for the Indo-US nuclear agreement and remade his government again with the support he needed, Rice said, referring to the withdrawal of support to the UPA government by the Left parties.

The formal signing ceremony of the bilateral agreement could not take place during Rice’ visit to New Delhi last week due to India’s concerns on certain riders in the US Congressional legislation on the nuclear deal, is being held after US President George W. Bush assured New Delhi that the new law makes no changes on fuel supply assurance commitments or the terms of the 123 agreement.

The Cabinet Committee on Political Affairs also gave the go ahead to Mukherjee to sign the agreement after approving the pact initiated by Prime Minister Manmohan Singh and Bush in 2005.

The signing ceremony was attended among others by India’s Ambassador to the US, Ronen Sen and senior State Department officials.