Bhrigu to Vyas: 5,000 years of fortune-telling

Bhrigu to Vyas: 5,000 years of fortune-telling

Karoli village, Rajasthan: In the dusty village of Karoli, north of the tourist town of Udaipur, five German visitors, two Jain monks and three small-town boys longing to go to the US flicked flies off their tea cups, their eyes fixed on the door leading to a small, yellow room.

They were waiting to meet a bald, 76-year-old man who reads fortunes from the Bhrigu Samhita, Hinduism’s most esoteric and famous book of destinies. According to legend, Bhrigu, the son of Brahma, whom believers worship as the creator, wrote the book on palm leaves about 5,000 years ago. Samhita means a collection in Sanskrit. 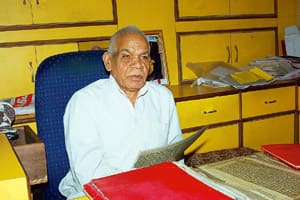 “People come to this place only because of him. Otherwise, there is nothing to see here," says Anil, who uses one name and runs a tea stall near the Vyas home.

Vyas, one of about 100 people in the country who interpret the Bhrigu Samhita, shot to national fame in 2007, when Pratibha Patil, an unlikely candidate, became President of the country—he had predicted her victory six months before her nomination was filed—but his reputation was built long before that.

One of the tourists, Ulrich Bremer from Berlin, heard about him in Germany. “It was the most incredible experience to sit there and listen to him read me things that I have never shared with anyone before," he says.

Like Bremer, many say they were astounded by the readings. Sunita Nevatia, 68, a homemaker from Mumbai, who has been visiting Vyas for three decades, says she does not take any major decision without consulting the book. “I was a young woman in Udaipur when I heard about him. When some friends told me about him, I went along. I was curious. And then, after seeing my palm, he told me everything about my life—the names of parents, the fact that I had three brothers, five sisters. He said my father did not have a long life and as it turned out, I lost my father (when) he was just 54." She says so many predictions based on his reading of the Bhrigu Samhita had come true—about her health, her family’s well-being, her children—that “I have unshakable faith in it".

It may sound like magic, but is actually very hard work, says Vyas. “I am only reading what Bhriguji wrote and still, it is not simple because these pages are filled with authoritative information about past lives, diseases, the future and future lives of millions of souls. It was written with yogic powers and mathematical calculations that we no longer have," he says. Wielding such a powerful repository of human destiny is very difficult, he explains. “I do 8 hours of sadhana (meditation) and havan (fire rituals) every day to be able to find the right page for visitors and tell them their fortunes."

But the manuscript is not just a chronicle of fate that outlines coming events and past-life tales. Sometimes, it is a medical lighthouse, warning the listener of potential health risks, says Ashok Vaidya, a physician-scientist who runs a centre of reverse pharmacology in traditional medicine for the Indian Council of Medical Research in Mumbai and has written a master’s thesis on medical references in the Bhrigu Samhita.

“I found references to cancer, tuberculosis, sexually transmitted diseases and heart, lung and kidney transplants in his predictions. Not only does he describe these ailments with incredible accuracy, he also gives incredibly effective prognoses." But Vaidya’s thesis was not accepted by Mumbai university. “The sad part is that we have not looked at the book as a resource at all. We are completely unwilling to investigate our heritage in a scientific manner."

Chandrama Pandey, head of the Jyotish (astrology) department at Banaras Hindu University agrees. “Theories about the origins of this book traverse through legend, myth and thousands of years of history," she says. “No one really knows for sure since no effort has been (made) to consolidate information about the manuscript and fundamental questions about it remain unanswered: When was this book written? Why was it written? How was it written? And if the future is cast in iron and mathematical calculations then does it mean that human will has no meaning?"

More importantly, does it contain the future of everyone? Did Bhrigu write the future of six billion people? Vyas laughs. “No. Bhrigu Maharaj has not written everyone’s future. See, when someone comes to me and asks me to read their future—I look at their palms to make calculations. I write a number for my reference. After that I show him a paper that has 15 circles with numbers in them. The numbers in one of those circles match what I have written in my slate. If the circle he selects has the same number as on my slate, then it means that I have their destiny page and that I must read it out to them. If there is no match, I have to tell them to try again later."

If the visitor returns and Vyas still does not find the page meant for him or her, he says he has to tell them “sorry, but Bhriguji has not written your future since he did not expect you to come asking for it. After all, Bhriguji is not always absolutely right".

Most experts say that Bhrigu calculated 500,000 horoscope combinations using Vedic mathematics and his yogic prowess and that these half a million permutations can be extrapolated to tell the future for 45 million people.

But no one has ever seen the complete manuscript. It is believed that marauding Mughal armies destroyed most of the original work when they ransacked a library at the Nalanda University 900 years ago. What remained was scattered among Brahmins across the country and between five and 100 people in different parts of the country possess some part of it. A printed version is rumoured to contain at least 200 volumes, but no one confirms any statistic with certainty.

And since most Indian astrologers who use the system work with loose manuscript pages, it is impossible to tell if the pages are genuine or fake. “But the bottom line is that we cannot tell the genuine readings from the fake. If your reading comes true, the reader has a genuine samhita. If it turns out to be wrong, then the reader has a fake copy and you should not go back to him again. That’s all there is to it," says Pandey.

The debate is further complicated by the existence of undocumented copies. Since the original manuscript was written in neo-classical Sanskrit on palm leaves, it had to be protected. “I could not risk using the original every day. It would cause too much wear and tear," said Vyas, who was just 17 when his guru gave him the pages and taught him how to read them.

So, he spent six years in the 1950s, laboriously copying every word from the “original" onto another paper. He is not the first to do that. Many generations of Brahmins have reproduced the entire text on palm leaves, bark, cloth, rough paper and, eventually, in print. However, no records were ever maintained and now, no one knows how many copies exist.

Pandey says that there is no original text left any more because “there is no leaf that will survive 5,000 years. In fact, writings on palm leaves do not survive more than 500 years. I suspect that what people are passing off today as the original is actually one of the many copies made by Brahmins when the original began to crumble."