Mumbai: Reserve Bank of India (RBI) deputy governor K.C. Chakrabarty played down the impact of higher interest rates on economic growth, which slowed to a nine-year low of 5.3% in the three months ended March.

“I don’t think the interest rates are that high or our policy rates are so high that they should significantly affect growth," Chakrabarty said at a conference on financial inclusion in Mumbai on Friday. “Growth is being affected for a variety of reasons; this is one thing."

Chakrabarty’s comments raised doubts over whether the central bank will cut policy rates when it announces the mid-quarter monetary policy on 18 June. Most economists have been expecting RBI to cut interest rates further to prop up economic growth, and the view gained ground after another deputy governor, Subir Gokarn, said on Monday that RBI had more elbow room to lower rates because of moderating inflation and easing oil prices.

“The Indian economy is moving into two different paths (those of inflation and growth). Even as these paths should converge, they are not meeting and each requires very different policy prescriptions," said Amol Agrawal, economist at STCI Primary Dealer Ltd. “It remains to be seen if RBI chooses growth concerns and cuts rates, or focuses on inflation and pauses. The environment is cloudy." 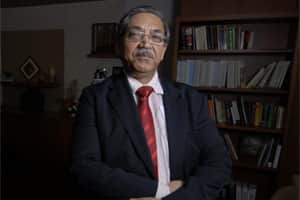 “Growth is somewhat lower than expectations and that may have (a) positive, moderating impact on core inflation. Two, oil prices have come off somewhat more than expected. Those are the two factors that suggest more room (for monetary policy easing)," Gokarn had said in his remarks, which had prompted a rise in bond and share prices as the markets took them as a signal for a further rate cut.

Interest costs constitute only 5-6% of the total cost of a project, said Chakrabarty. Other costs play a bigger role in deciding whether or not a project goes ahead, he added.

The RBI deputy governor said it does not make much difference if interest costs rise by 1-2 percentage points and the central bank alone shouldn’t be blamed for the economy slowing.

“If inflation comes down, definitely (the) monetary policy rate will come down," he said, adding that “for the Reserve Bank, the first priority is inflation. It is not only growth, we have a multiple indicator approach. But inflation is definitely the major concern".

PTI and Mint’s Joel Rebello contributed to this story.