Mumbai: India’s chief audit officer wants an independent system to review the country’s flagship social security scheme which, he said in an interview, has otherwise met its objectives.

A good “oversighting machinery" is a must for the success of the National Rural Employment Guarantee Scheme (NREGS), according to the comptroller and auditor general of India (CAG) Vinod Rai. 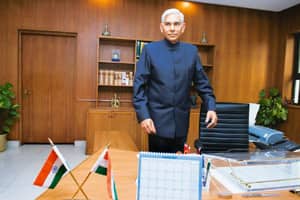 In the interview last week, Rai said the scheme has done well at the grass roots and “more or less delivered the objectives for which it was created" but “an oversighting mechanism of totally independent, apolitical and experienced people is a must for its success when so much of money is involved".

Rai said the credentials of people at the top level implementing the scheme should be above board. “For oversight, we can have a people’s body which is apolitical. We don’t necessarily need to have NGOs (non-governmental organizations), but persons with some experience of having worked in such projects and who can give independent reports. These people should not have any allegiance to anybody. The MPs (members of Parliament), professors, retired bureaucrats, social workers can be involved. They should conduct surprise inspections."

NREGS is central to the plans of the Congress-led United Progressive Alliance government to promote inclusive growth. It is run under the National Rural Employment Guarantee Act (NREGA) passed by Parliament in 2005, and aims to enhance livelihood security in rural India by providing at least 100 days of guaranteed wage employment on demand.

In its audit report, tabled in Parliament in October, CAG criticized poor record maintenance, delayed payment of wages and non-payment of unemployment allowance at NREGS projects. It noted that of the total available funds of Rs12,074 crore, including the states share of Rs813 crore up to March 2007, the state governments used around 73%.

The report said the ministry of rural development should accept the overall responsibility for coordinating and monitoring its administration and ensuring efficient and effective utilization of funds provided by the Centre. Initially, 200 districts were covered and at the second stage it covered 130 more districts.

CAG conducted a performance audit of implementation of NREGA covering the first phase of 200 districts.

“Normally we do an audit when a scheme is more or less over. But for NREGA, the government took a very proactive step in asking us to audit an ongoing scheme. We saw the entire scheme holistically—creation by the Central government and the Planning Commission and implementation by the local bodies… The ministry of rural development has taken our recommendations very positively," Rai said.

Dubbing it as a “very laudable scheme", Rai said the implementation in the beginning was slightly slow. “Not sufficient delivery architecture was created before the money was provided to them. The system was not in place on how to maintain the register; how to prioritize the work; and how to ensure that the local contractors do not get into work and people actually do on their own... There were leakages of a sub-optimal delivery because the system had not been tested but there was no malafide," he said.

Whether the government asks CAG or not, Rai is preparing his staff to ensure that starting next year he does a thorough audit. “I am pretty confident that the government has put in place the right infrastructure. But I will be able to say this with a certain degree of confidence only about a year later when we have gone to the field and verified for us. We will do this by the end of fiscal 2010," he said.