Bangalore: Half a decade is perhaps too short a time in the life of a research laboratory to assess the impact made by it, but the progress and level of local engagement achieved by the India lab of Micosoft Research (MSR) has surprised even Richard F. Rashid. 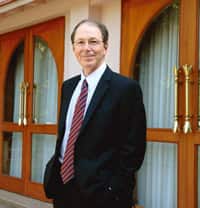 Looking ahead: MSR’s Richard F. Rashid says that increasingly the way we think about science is in terms of modelling data and all sciences, such as biology and astronomy, are becoming data sciences. Hemant Mishra/Mint

Since then, it has made more than a dozen breakthroughs that not only resolve India-specific technological puzzles, but are also driving Microsoft’s march at the cutting edge of software development.

Its latest project, the “address geocoder", is just one example. The location search software was developed in response to the absence of a standard address format in India. It has gone into the making of Bing Maps, a searchable database of addresses worldwide with which Microsoft is taking on more established digital map providers such as Google Inc.

The address geocoder is already available in parts of Europe, and will arrive in India later this year.

“I am surprised by how much progress the (India) lab has made. That shows what happens when you put researchers in India. We didn’t see this kind of local engagement in China or England," said Rashid, senior vice-president, research, Microsoft Corp.

Another local research initiative is the India Digital Heritage, which is meant to capture and present diverse aspects of the country’s heritage in a digital form, including tourists’ personal experiences.

It has been undertaken with local academics and the department of science and technology in New Delhi.

“It is just about to launch," said MSR India managing director P. Anandan.

Digital Green is a project that applies commodity video hardware—or real time three-dimensional video—to step up awareness and spread the use of sustainable agriculture practices among small farmers.

It is active in some northern states of India, and has now been spun off as a separate non-government entity.

It recently received $1 million from the Bill and Melinda Gates Foundation, a philanthropic organization run by Microsoft founder Bill Gates.

MSR has 850 researchers worldwide, which Rashid claims is the largest congregation of basic research computer science (CS) professionals. MSR India—which has 56 researchers—considers engaging the local CS community, which lacks a culture of pursuing PhD and basic research, as a long-term goal.

At its fifth anniversary and annual research symposium on Friday, called TechVista, it launched ResearchAndYou—a portal to bridge the gap between the minuscule CS research community in India and the potentially large talent pool available at the undergraduate level. It has managed to get some leading computer scientists, including professors from the Indian Institutes of Technology and the Indian Institute of Science, to mentor the participants.

Anandan doesn’t expect any “direct benefits" from this anytime soon, but the lab hopes to build the ecosystem in this branch of science—which Rashid and other computer scientists believe is going to be the “mathematics of sciences".

Increasingly, the way we think about science is in terms of modelling data; all sciences, such as biology, astronomy and environment are becoming data sciences, said Rashid.

During a discussion on “The Future of Computing and Computer Science", visiting scientists spoke about a variety of possibilities.

MSR technical fellow Butler Lampson, a Turing Award recipient who has the unit of measuring talking speed—milliLampson—named after him, said he had been unsuccessfully predicting the large-scale presence of robots in homes for some time. But he added he was still hopeful about their future.

“We are 15 years away from when robotics would come to human aid in a big way, particularly in prostheses," he said.

But Barbara Liskov of the Massachusetts Institute of Technology, who is also a Turing Award recipient, felt differently about the imminent issue before computer scientists.

According to Liskov, the way programming is done needs to change to be able to run on multi-core machines.

But the biggest challenge to the world of computing, said Turing Award winner Tony Hoare, was to make computing relevant to everyone.

Frightened by the “digital divide" and its implications, the 76-year-old programming doyen said mobile computing could provide a solution—may be a “magic" device from Apple Inc., he said, cheekily hinting at the firm’s Tablet personal computer launch scheduled for this week.

“I really don’t know (about the Apple tablet device), I don’t think anybody does other they (Apple) themselves," said Rashid.

What he does know is that the way people are adapting computing to different purposes, reading is going to be an important area. “We’ve done some work with Amazon (Amazon.com) and Kindle (software for displaying e-books), and I’m sure Apple will do some work in this area as well," he added.