Thanks for Visiting Mint
You seem to have an Ad Blocker on. Please turn it off in order to continue, or whitelist Mint
HOW TO TURN OFF AD BLOCKER
OR
REFRESH IF YOU ALREADY TURNED OFF THE AD BLOCKER
Home >Home-page >Jairam Ramesh | We are now looking at NREGA 2.0

Jairam Ramesh | We are now looking at NREGA 2.0

Jairam Ramesh | We are now looking at NREGA 2.0

New Delhi: As minister for rural development, Jairam Ramesh oversees the largest spending in the social sector by the government. This includes the marquee Mahatma Gandhi National Rural Employment Guarantee Scheme (MGNREGS) that was pioneered by the Congress-led United Progressive Alliance in 2006. The minister, an alumnus of the Indian Institute of Technology and the Massachusetts Institute of Technology, is known for his forthrightness. In a typically candid interview to Mint on the eve of the sixth anniversary of MGNREGS, Ramesh conceded that there were legitimate concerns about the programme. Ruling out any chance of a rollback of the entitlement programme, he said the ministry was ironing out the faults and that a revamped version would be launched before the presentation of the next Union budget in March. Edited excerpts:

It is the sixth anniversary of the Mahatma Gandhi National Rural Employee Guarantee Act (MGNREGA). How do you rate the success of the programme? What are the metrics you would use to rate it?

Well there have been four positive effects of NREGA so far.

One, there is no doubt that agricultural wages have gone up. And for years economists have been writing—in fact, the seminal work of (Planning Commission deputy chairman) Montek Singh Ahluwalia written way back in 1979 on the determinants of rural poverty, when he was in the World Bank, pointed to agricultural wage rates as the most important determinant of rural poverty. So agricultural wage rates have gone up. Second, distress migration has come down, but not to the extent it should have. Third, there is visible evidence of community assets being created. But I am not particularly enamoured of roads being created because these roads will last only for two or three years; the restoration of water bodies (has gone well). These three are measurable...quantifiable.

The fourth is perhaps not measurable, but is certainly tangible. There has been empowerment of the weakest sections. We can see this in Bihar, in parts of Uttar Pradesh, in parts of Orissa; I have seen this in Andhra, for example, where traditional communities who were expected to kowtow to the local elites to the dominant castes today have a certain sense of empowerment. They are getting money and they are getting regular money. They have an assurance of employment. These are the four broad positive effects. 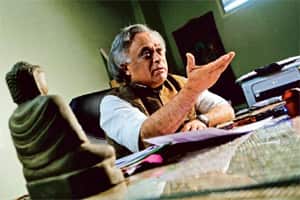 Assessing progress: Ramesh says distress migration has come down, but not to the extent it should have. Pradeep Gaur/Mint

So critics have a point when they talk about leakages.

On the sixth anniversary of MGNREGA, rural development minister Jairam Ramesh talks about what the employment scheme has accomplished and where it has fallen behind

This has been used as an argument to roll back the whole entitlement aspect of MGNREGA.

I know your newspaper has been in the forefront of this campaign to paint MGNREGA in such a light, saying that this whole thing is a digging exercise and a ditch-filling exercise. This is a completely bogus argument. As I said, you have to look at it in its totality.

Let me finish the negatives. First is that implementation is very uneven. The second is that because of the absence of a transaction-based MIS everywhere, it is only now that we are getting into it, like we have in Andhra. We have not been able to ensure the kind of integrity in expenditure that we should have, particularly when you are spending ₹ 40,000 crore a year. Thirdly, delayed payment is still an endemic problem. In fact, there is low demand for jobs in many areas of tribal India that I have seen. Jharkhand, Bihar and Orissa are the three poorest states of India and the labour budget should be the maximum in these states; there is no correlation between the labour budgets and poverty in these states. And one of the reasons is that in the poor parts of India the infrastructure is poor, the postal infrastructure is poor. Therefore, you have delayed payments. That vitiates the whole process of labour budgeting. And fourthly, we shouldn’t forget that this is the only programme that is implemented through gram panchayats (village councils). Money comes from the central government, but the projects are identified by the gram panchayats. The gram panchayat is the anchor. And we launched into this programme without building the technical capacity of the gram panchayat. It is only now that we are building the capacity of the gram panchayats and the gram sabhas.

We are now looking at MGNREGA 2.0. After I came (took over the ministry), we prepared a blueprint of NREGA 2.0. I put it on the website. I got a lot of feedback from different stakeholders; from civil society, from state governments and by the end of February we will put in place NREGA 2.0, which addresses many of the concerns that have been articulated by critics.

We are not changing the essentials of MGNREGA—the fact that no contractors can be used, machinery not being used. But we are building more flexibility into the programme as far as the selection of works are concerned, expanding the schedule of works so to make it much more related to agriculture. And as we go along, we learn from experience and we bring about those changes.

When is this being launched?

The architecture is already on the website. We listed nine major challenges and how we propose to address these challenges. I set up a committee under Dr Mihir Shah’s chairmanship to put it all together in terms of revised architecture. They are giving me the report by 15 February. After that we will be ready. We are not changing the Act; these are changes in the schedules of work. Before Parliament starts (for the budget session), we will have NREGA 2.0

You mentioned in the beginning that MGNREGA has boosted wages. But it has become a controversial issue.

Actually the question was relating to the Karnataka high court order on minimum wages under MGNREGA and your stance.

I think I should take recourse to the classic statement that the matter is sub judice and I don’t want to say anything. But let me say, you cannot compare NREGA employment with any other form of employment. It is demand driven—you come because you don’t get employment anywhere else and you demand work and you know you are entitled to that work legally.

If there is a huge demand for employment, then there will...

I did an exercise recently in which I said: suppose all states operate NREGA with the same degree of efficiency and reliability as Andhra (Pradesh), what will be the total expenditure involved? Thank god for Indian inefficiency. Had we had the entire country follow the Andhra model, we would require an allocation of hundred thousand crores, which is two-and-a-half times of what we are spending. So in a way, in a very perverse way, one can argue that look, we have been saved by Indian inefficiency.

There is a strong argument, given the leakages and problems with MGNREGA, that this programme of entitlements should be rolled back to regain fiscal balance. Do you think in the next budget you will be able to hold on to this and not oversee a rollback?

How can we roll back a demand-driven programme?

Critics are saying that the government is using the minimum wage issue to discourage employment under the programme.

No, no. There is no Machiavellian issue here.

So what is your projection on the spending for next year under MGNREGA?

It is a meaningless figure. The demand could be anything.

So would it match this year’s spending?