At one stroke, this deal makes R-Power a company with an operating income and positions R-Infra as a focused utilities firm. R-Infra holds 45% equity stake in R-Power and is its largest shareholder.

Post Friday’s announcement, R-Power—at 35,000MW, has the largest development portfolio in the power sector, but wasn’t producing a single watt of electricity till last quarter—will have more than 1,000MW power generation capacity, with 433MW coming from the three newly-transferred plants and 600MW from its newly operationalized Rosa I plant in Uttar Pradesh.

Secondly, this transfer adds gas-fired power plants to its kitty right away, even as it struggles with land acquisition and feedstock issues for its 7480MW gas-based power plant in Dadri, Uttar Pradesh.

“The intent all along was to club power generating plants in one company. Moreover these plants were small earlier, now they have clear expansion plans," said a senior R-Infra executive, who did not want to be named, and declined to specify the quantum of capacity expansion that was being planned. “Reliance Power has the resources and they will do it." 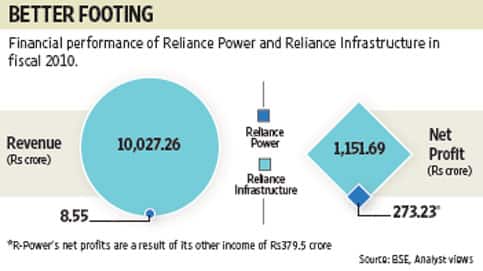 Sector analysts are saying there could be more benefits to this than merely stacking power generation assets in one firm within R-Adag.

Jagannadham Thunuguntla, head of equities at SMC Capitals Ltd in New Delhi, said that these assets may have been transferred into R-Power to enable the company to have greater cash flow from operations, since its power projects have long gestation periods and will not start before 2013-14.

Agrees the R-Infra executive quoted above: “We got fair value for these assets and we are much better off spending that money in higher income-generating infrastructure assets."

A Mumbai-based analyst with a domestic brokerage firm said that with this transfer and start of Rosa I, “RIL will no longer be a zero-operating income company. The shareholders can see some income pouring in now".

R-Power floated the country’s largest public issue in February 2008 mopping up Rs11,563.20 crore, before a global financial meltdown squeezed credit availability and fund-raising all over.

A 28 May note by Mumbai-based brokerage firm Edelweiss Securities Ltd said: “The transfer of assets assume significance since alternative sites are being scouted by Reliance Power to compensate for the 7 gigawatts power generation at Dadri, considering the issues surrounding land allocation."

The Edelweiss analysts, Shankar K. and Subhadip Mitra, wrote that while the details of the expansion potential of these three sites were awaited, at least part of the 28 million standard cu. m per day of gas that R-Adag is expected to receive from Mukesh Ambani’s Reliance Industries Ltd (RIL) can be used when the capacities of these plants are increased.

R-Adag and RIL are in talks to seal a gas supply renegotiation, in accordance with a Supreme Court verdict earlier this month that had ruled—ending four years of legal battles—that the two groups should renegotiate in keeping with government regulations.

A statement issued by the group on Friday stated that three power plants—a 220MW capacity at Samalkot (Andhra Pradesh), a 165MW one at Kochi (Kerala) and 48MW plant at Zuarinagar (Goa)—“has been agreed to be transferred by Reliance Infrastructure to Reliance Power to bring entire power generation portfolio under one roof".

Both Andhra Pradesh and Kerala plants are in 15-year power purchase agreements with AP Transco and Kerala State Electricity Board, respectively, while Zuarinagar has been supplying power to the government of Goa as well as various industrial consumers.

The statement further states that the total transfer value of the three assets has been pegged at Rs1,095 crore, based on an “independent valuation" done be audit and consulting firm KPMG. The share capital of the subsidiary companies of R-Infra that hold these assets and the the power plants themselves would be transferred to R-Power after obtaining requisite approvals, it said.

An analyst with a domestic brokerage firm, speaking on condition of anonymity, also pointed out that it could be more economical to transport the gas from RIL’s block in the Krishna-Godavari basin to these three sites, as and when the supply deal is sealed with the company, than taking it all the way to Dadri.

A transfer of operating assets would considerably help improve R-Power’s revenue, which currently stands at a mere Rs1.33 crore for the quarter ended 31 March. R-Power had closed fiscal 2010 with a turnover of Rs8.55 crore.