Home >Home Page >Reliance Life may sell 26% to Swiss Re

Reliance Life may sell 26% to Swiss Re

Reliance Life may sell 26% to Swiss Re

Talks on the stake sale by the private sector life insurer, the only one in India that does not have an overseas stakeholder yet, have reached the final stage and an announcement is likely in April, according to three persons familiar with the development who didn’t want to be named.

Under the existing law, a foreign entity is allowed to own up to 26% of an Indian insurance firm. UBS Securities India Pvt. Ltd and Deutsche Bank AG are the investment bankers advising Reliance Life on the deal; Ernst and Young Pvt. Ltd has been hired to conduct due diligence. Mint could not reach the investment bankers over the weekend. Ernst and Young did not comment.

Reliance Life has informed the Insurance Regulatory and Development Authority (Irda) about the prospective deal, said one of the persons cited above. Reliance Life spokesman Sharad Goel declined to comment for this story. Swiss Re spokeswoman Eileen Lim, based in Hong Kong, said the global insurer does not comment on “speculation".

Reliance Life began efforts to bring in a foreign partner nearly a year ago and after several rounds of talks with many global insurers, it agreed to sell 26% of itself to Swiss Re, the world’s second biggest reinsurer.

China Life Insurance Co. Ltd, one of the biggest Chinese life insurers, was the closest contender. “The valuation process took a long time," said one person involved in the deal. 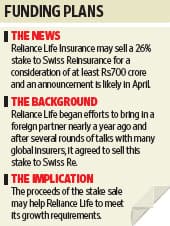 According to a December report by Edelweiss Securities Ltd on the life insurance business in India, the embedded value of Reliance Life was Rs2,400 crore at the end of the first half of 2009-10.

Embedded value is calculated on the basis of expected premium collection, profit and loss, associated risks, solvency, retention ratio, expenses and over-runs, claim settlement strengths, liabilities and capital efficiency. Going by this value, a 26% stake would have fetched Reliance Life Rs624 crore. Swiss Re will pay a premium that will take the deal value to Rs700 crore, said the person involved in the deal.

For the quarter ended 31 December, Reliance Life collected a total premium of Rs1,603 crore, giving it a private sector market share of 9.3%. Including Life Insurance Corp. of India, the country’s largest insurer, India has 23 life insurers with combined assets worth at least Rs10 trillion.

Reliance Life manages at least four million policies through a distribution network of 1,247 branches and 192,000 agents. The firm had Rs11,500 crore under management in the quarter ended December.

According to analysts, the stake sale is partly due to the company’s need for capital to support its operations and expansion plans. Typically, life insurers infuse capital periodically to meet growth requirements. In seven years of operations, Reliance Life has infused nearly Rs2,810 crore, with the last tranche of Rs330 crore coming in the third quarter of fiscal 2009.

One of the key yardsticks to assess a life insurer’s capital needs is to evaluate its capital efficiency by comparing its gross written premium (GWP) with the capital deployed by the company. At the end of March 2009, Reliance Life’s GWP stood at Rs4,915 crore, compared with its capital of Rs2,740 crore, recording a GWP-to-capital ratio of 1.79%, lower than that of most private insurers. GWP is the revenue (premiums) expected to be received by a life insurance company over the life of the contracts. To mitigate the risk of losses above a certain threshold, insurers often purchase reinsurance.

When the life insurance sector was opened in 2000, most companies started ventures with foreign partners, but Reliance chose to operate on its own. It acquired AMP Sanmar Life Insurance Co. Ltd in 2006.

The deal with Swiss Re is being carried out at a time when Reliance Life has already announced plans for an initial public offering (IPO) as soon as the insurance regulator comes out with public offer guidelines for insurers. Irda and the capital market regulator, the Securities and Exchange Board of India, are drafting the IPO guidelines.

An industry expert who is also close to the development said both Reliance Life and Swiss Re may be required to reduce their stakes proportionately when the company sells shares to the public.

Reliance Life posted a 7% drop in its average premium per policy during the December quarter. According to Punit Srivastava and Dhiren Shah, analysts with Daiwa Securities Group, Reliance Life’s loss narrowed to Rs175 crore in the nine months ended December, from Rs772 crore in the same period the previous year.