New Delhi: Nothing distinguishes this parcel of west Delhi soil from any of the other 600-odd acres of cultivable land within the Indian Agricultural Research Institute (IARI). It sits under a test crop of cotton in a corner of IARI’s MB3 sector, narrow roads on two borders and a tube well bristling on one frontier. There isn’t even a signboard identifying it as what it is: the plot of land where the first trials of Norman Borlaug’s dwarf-wheat seeds were planted, the plot of land where the Green Revolution began.

Listen to a podcast of Dr. M.S. Swaminathan, talking about Dr. Norman Borlaug and how the green revolution came to be

Borlaug, the Nobel-winning food scientist who died on 12 September at the age of 95, had worked since 1944 on variously engineered, richly productive strains of wheat—an agricultural philosophy that would later be decried as ecologically destructive, but that appeared at the time ideal for solving the developing world’s growing hunger. His solutions were developed for Mexico, but their grandest theatre of operations would be India, and they arrived here via IARI. 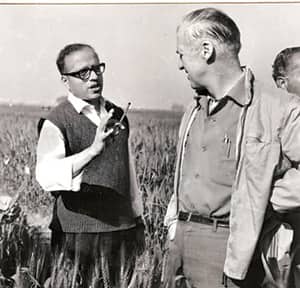 “More of the same was evidently not the answer," says V.L. Chopra, an emeritus professor at IARI and, according to an institutional wisecrack, the oldest living fixture on the campus, having been there since 1955. “We knew somebody had to think out of the box. That was the atmosphere prevailing at the institute back then."

In 1962, an IARI wheat scientist named M.V. Rao spotted, among a large set of wheat samples sent by the US department of agriculture (USDA), a batch that was short and sturdy. “That interested him immediately," remembers H.K. Jain, who worked at the time in IARI’s botany division. “He thought that could help solve our problem, and he showed it to us, and to M.S. Swaminathan, who headed botany in those days."

Swaminathan contacted USDA, asking for the origin of the dwarf batch, and he was directed to a certain N.E. Borlaug. “So, I wrote a letter to the IARI director, requesting him to invite Dr Borlaug," Swaminathan says. “Then, he sent the letter on to the ministry. In those days, the bureaucracy was like that." The invitation went to Borlaug through the Rockefeller Foundation, and Borlaug came to New Delhi in March 1963.

“Borlaug would be out in the fields early every morning, and anybody who wanted to discuss anything was welcome—not just science, but development too," Chopra recalls. “He didn’t confine his curiosity to wheat. I remember taking him around the chickpea and rice fields in season." Swaminathan accompanied Borlaug on a tour of the north Indian wheat belt to better acquaint him with the conditions; six months later, Borlaug sent IARI four selected varieties of his dwarf wheat. The beginning:The plot at the Indian Agricultural Research Institute in Pusa in New Delhi where the first dwarf varieties of wheat seeds sent by the late agricultural scientist Norman Borlaug were planted. Harikrishna Katragadda/Mint

Even that first, modest trial was riddled with doubt; Swaminathan remembers “a lot of sceptics", and says that pushing the trial through wasn’t easy. “Many people had doubts about it. With the imported seeds, one might very well bring in diseases and pests and so on," Chopra says. “These seeds needed a new agronomy altogether. They had to be planted at lesser depth, and the irrigation schedule was different. Then, there was the bhusa—the straw. Farmers used the straw as well, and people thought that a shorter plant would mean less straw."

The resulting crop, however, was almost impossibly ideal, free of taint or disease, producing 4,000-5,000kg of grain per hectare instead of the earlier 1,000kg norm. When the crop flowered, visitors started to drop by IARI just to see it. “It is now very evident…that a number of Mexican wheat varieties are very well adapted to Indian conditions," Borlaug wrote to Swaminathan just before the harvest.

“It just clicked—it was just the right time," R.P. Sharma, also an IARI emeritus professor, and Swaminathan’s PhD student during those heady days, observes. “There was a sort of wall, and it had been difficult to go beyond that without thinking creatively. Everybody had been desperate for a solution—which is similar to the situation prevailing now also."

The next year, Swaminathan suggested jumping straight into farmer trials, an unusually rapid progression. His proposal for what he called a National Demonstration Programme in 150 fields of poor farmers faced an acute danger of languishing or being cancelled, until C. Subramaniam, then Union minister for agriculture, approved it overnight. Once again, the results were thoroughly persuasive. “Those demonstrations really catalysed the revolution," says Sharma. “Farmers have a very strong communication channel among them, and the message spread very quickly about these successes."

It could not have come a moment too soon. A brutal double whammy of drought, in 1965 and 1966, massacred the wheat crops, pressing India to import 21 million tonnes (mt) of wheat over those two years. “We reached a stage where there was stock for only two weeks and there was nothing in transit in the pipeline," Subramaniam recalled at a seminar in Chennai in the early 1990s. “I called all my officials and experts together and…said we should identify the nearest ships carrying wheat to other countries and appeal to the president to divert those ships to India, if the other countries could wait for another six to eight weeks for their supplies. That was how the situation was saved."

In 1966, India ordered 18,000 tonnes of dwarf seeds from Borlaug in Mexico and, in 1968, reaped a record wheat harvest: 17 mt, up from 12 mt in 1964. Schoolrooms were requisitioned, at short notice, to store the surplus grain, and there were not enough wagons on trains to transport the harvest. That July, when Prime Minister Indira Gandhi released a postage stamp that used the words “wheat revolution" for the first time, the image selected to accompany three stalks of wheat was that of IARI’s library, its façade sketched in clean lines and its clock tower rising into a vivid green sky.