State-run Life Insurance Corporation of India (LIC) was on Monday allotted a 4.4% stake in Oil and Natural Gas Corp. Ltd (ONGC)—part of the 5% sold by the central government last week through the auction route. The allotment figure confirmed earlier reports that the stake sale on Thursday attracted few institutional buyers willing to pay even the floor price of ₹ 290 per share.

The insurer purchased 377.1 million, or 88.3%, of the shares offered in the auction, taking up the insurer’s holding in ONGC to 9.48%, a little below the permitted ceiling of 10% under insurance laws.

LIC’s stake purchase in the auction, which was nearly dismissed as a failure, shows that the insurer has become the buyer of last resort, analysts said, and also disproved the government’s original argument that it was seeking to unlock value in state-run firms for the common retail investor through divestments.

The government is trying to raise money to reduce its fiscal deficit, which in the first 10 months of the fiscal year has exceeded its target for the entire year to 31 March. 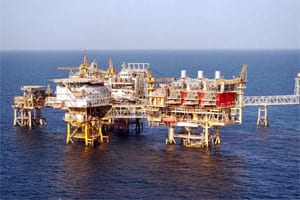 The insurer has picked up a 5% stake each in four public sector banks—Bank of Maharashtra, Indian Overseas Bank, Punjab National Bank and Uco Bank—and will buy a 5% stake each in at least five other state-owned lenders—Dena Bank, Central Bank, Syndicate Bank, Allahabad Bank and Punjab and Sind Bank. LIC has invested roughly ₹ 2,310 crore in buying stakes in the four banks in 2012 and is estimated to be spending roughly ₹ 1,400 crore in purchasing shares in the five other lenders

The divestment in ONGC was the first through the so-called offer for sale method introduced on 1 February by the market regulator. Despite the efforts of six prominent bankers to the issue, the government struggled to convince investors to buy the shares on offer until LIC stepped in. 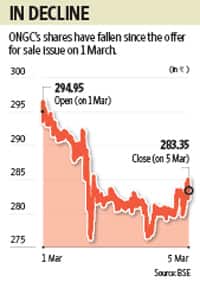 Other investors in the auction, in which the floor price was set at a premium to the prevailing market price, haven’t been identified.

A preliminary investigation by the stock market regulator has indicated an inordinate delay in the transfer of funds to the exchanges while executing LIC’s trades.

The government and the market regulator both said that due to a technical glitch in the updating system of share bids, LIC’s exact bid numbers could not be ascertained till late on Thursday and hence the final bid numbers for the ONGC auction were unknown till late. “There are three main conclusions that one can draw from the ONGC stake sale," said Saurabh Mukherjea, head of equities at Ambit Capital Pvt. Ltd.

“Firstly, the government has to rethink its pricing strategy in order to make its divestment programme succeed. Secondly, there seems to be some kind of electronic failure owing to which bids were rejected, and the information dissemination mechanism collapsed in the dying market hours as also in the aftermath: we still don’t know what exactly happened. The third serious issue is the failure to get any response from investors other than LIC, which indicates that there was no significant effort at book-building prior to the auction to attract institutional investors," he said.

“Investors will be circumspect when the next auction happens, but I expect the government will learn its lessons and price its next offering better and gauge investor appetite beforehand." Mukherjea said.

The government has denied that it called on LIC to bail out the issue. A senior LIC official too denied that the insurer bought ONGC’s shares at the behest of the government.

With a nearly 9.475% stake in ONGC, LIC’s stake is nearly at the limit. Insurance Regulatory and Development Authority guidelines stipulate that an insurance firm’s holding cannot exceed 10% in any listed company.

“They (LIC) were interested in ONGC in a big way. Do you think anybody in LIC has the authority to commit investment of thousands of crores without going through the proper process just because somebody from here (finance ministry) gives them a call," he said.

When asked about the lack of interest from investors, Khan said, “This is not a normal FPO (follow-on public offer) where you talk about whether it has been oversubscribed by X number of times or Y number of times. Out of 42 crore shares on offer, we got bids for 54 crore shares. I don’t understand how can you say this is not a good response."

He said there won’t be any more auctions of public sector units’ shares as “there is not enough time left this fiscal."

Asked about the lessons learnt from the ONGC issue, Khan said such auctions needed to be carried out on one stock exchange, indicating that auctions at both the National Stock Exchange and BSE created confusion.

“The meeting on pricing (of NBCC stake sale) is likely to happen on March 22. The issue is likely in the end week of March," he said. On the amount to be raised from the stake sale, Khan said it would be small and definitely less than ₹ 1,000 crore.

In the current fiscal, the government will raise a little less than ₹ 14,000 crore through disinvestment against the budget target of ₹ 40,000 crore, he added.

Ashwin Ramarathinam in Mumbai and Asit Ranjan Mishra in New Delhi contributed to this story.