After a year of dismal returns that has seen the industry shrink by one-fifth to $1.5 trillion, or Rs73.8 trillion, and many funds shutting shop, shell-shocked investors, often well heeled, are globally yanking cash out of hedge funds, lightly regulated pools of capital that take bets on all sorts of global assets—equities, bonds, commodities and currencies—in complex trading strategies often backed by even more complex mathematical models. 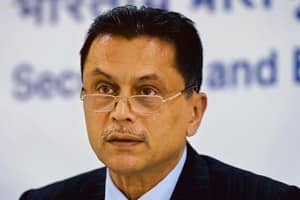 Hedge funds are part of the so-called shadow banking system that exists outside the range of regulatory oversight; they are secretive and do not report fund size (often leveraged several times through debt) and returns to outsiders.

Mint could not independently confirm this estimate of portfolio losses, but evidence of investor withdrawals and funds folding up dot the hedge fund landscape here.

Another multibillion dollar UK hedge fund, The Childrens Investment Fund Foundation, or TCI, has been winding down its investments in India—banks dominated its portfolio—after its French fund manager, Patrick Digorse, left. TCI’s Indian stock portfolio was worth at least $1.2 billion in early 2008.

“Funds remain bearish on India as they expect corporate earnings to remain low, with the huge inventory pile-up in China and demand destruction in the developed world," said Bhatkuly, who now runs another hedge fund New Horizon Investments.

Comments were sought from TCI for this story, but it did not respond. Launched in 2003 by money manager Christopher Hohn, TCI made its local reputation as an activist fund when it wrote to local stock market regulator, Securities and Exchange Board of India, or Sebi, to protest the complex restructuring plan of metals tycoon Anil Agarwal’s Vedanta Resources Plc.

Large India-dedicated hedge funds, including Monsoon Capital Llc. and US-based Sansar Capital Management Llc., are battling huge redemptions and a slump in their asset values in 2008. According to brokers, some of these funds may wind down operations. Sameer Arora’s Helios Capital Management, which had assets worth $1.2 billion at the end of 2007, now manages about $300 million.

To be sure, between January and December, Indian equity makets measured by the Bombay Stock Exchange’s benchmark Sensex lost 52% in value after a sevenfold rise between 2003 and early 2008.

The largest foreign institutional investor, or FII, in India, Halbis Capital Management, an arm of Hong Kong and Shanghai Banking Corp. Ltd, or HSBC, managed by celebrity fund manager Sanjiv Duggal and team, saw assets decline from about $8 billion around the end of 2007 to about $2 billion by end-2008. One of its key fund managers, Manish Srivastava, has joined local brokerage India Infoline Ltd.

Mint could not seek or receive comment from all of the funds named in this story.

Indian regulators, who had been worried about the wave of hedge-fund money that splashed into Indian stocks in 2007, are likely to take a sigh of relief as longer-term foreign investors grow in importance because of the ebbing of hedge-fund money.

“Leveraged hedge funds and leveraged investors, who were investing in India funds, all had to perforce sell when the asset value went down," Sebi chief C.B. Bhave said in an earlier interview.

FIIs pulled out around $13 billion, net of investments, from Indian equities during 2008, which also saw 454 new FII registrations.

Hedge fund managers typically take home 2% management fee and 20% of the annual profits of their funds.

With their fund units down to one-fifth and one-sixth of their value in 2007, it will take several years of outstanding performance or returns for these fund units to make profits, and thus make hedge fund executives eligible for such carry fee.

Amid the slowdown and gloom, a few large global hedge funds such as Capital International Asset Management and Janus Capital Group Inc. continue to be active in the Indian market, according to a senior executive of a large domestic brokerage, which also offers arbitrage products to hedge funds.

“Capital International is the most respected hedge fund in (the) Indian market. It can swing the market (either way)," said the head of equity capital markets at a large foreign investment bank.

George Soros’ Quantum Fund, which played contrarian, picking up significant stakes in many large Indian stocks, including Anil Ambani’s Reliance Capital Ltd, Anand Jain’s Jai Corp. Ltd and two Indiabulls entities, in 2008, is now selling. On Wednesday, it sold more than 2% stake in Reliance Capital, the company said in an announcement to the Bombay Stock Exchange.