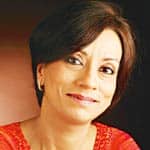 Mid-week, she focuses on the big picture, exploring business opportunities. Later in the week, she’s in Osaka, addressing fellow Asian women entrepreneurs; then back home, as part of Thermax’s corporate social responsibilities’ programme, she introduces villagers on the outskirts of Pune to rainwater harvesting. Weekends, she’s at basketball practice with son Zahaan, taking daughter Lea to cookery class in between catching a concert with husband Pheroz.

But Tuesdays are different. On that day, come what may, Pudumjee leaves work well on time to arrive at the Gulati Hall at 6.30pm sharp, occasionally straight from the airport after a business trip. Putting her multiple avatars on hold, she becomes a voice singing second soprano, blending harmoniously with 14 others who constitute the Chamber Singers choir. Under the watchful baton of their conductor Veronica Krishnayya, this small dedicated band of women has strived for more than a decade to excel in singing the works of Bach, Brahms, Schubert, Debussy and Bernstein. It holds two public performances a year, at Easter and before Christmas, in locations such as Pune, Goa and Mumbai. Pudumjee explains, “We are a group united by a common passion—the love of singing. It’s my getaway to a different place. It’s something I do for myself, not for anybody else." 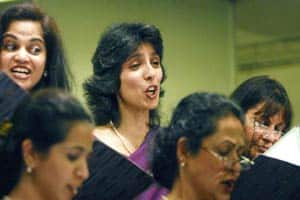 While doing her A levels in school in England, Pudumjee got to perform Beethoven’s Moonlight Sonata. Her father, “an absolute perfectionist", came to visit, renting a small recording room with a piano, where he made her repeatedly practice and play back the piece. Then, just before the concert, while complimenting her on her hard work, he said, “Now just play to express rather than to impress." These were the values on which he built Thermax. Later, studying to be a chemical engineer at Imperial College, London, Pudumjee applied this dictum to her musical choice. She joined the college choir, fell in love with choral singing and never played the piano in public again.

It’s the diversity of the Chamber Singers that makes the choir such a satisfying experience for Pudumjee. At 83, its senior-most member, Gladys Kothavala, can no longer see but still sings beautifully. Page Mehta, 81, says she loves both the singing and the camaraderie. Zinnia Satha, a human resources professional and, at 27, the group’s youngest addition, says, “When we meet, it’s like we’ve known each other for years." Neeta Ranagaswami is a German language teacher-turned-technical editor; Lorraine David an industrial psychologist who has joined her husband’s training business. Krishnayya’s other students are as varied—she conducts a Pocket Choir of youngsters between 15 and 18, who perform alongside street children living in Shivaji Nagar railway station. And to make the music meaningful to them, she unabashedly draws upon Bollywood repertoire.

In the business world, Pudumjee is rated a good listener. Naushad Forbes, director, Forbes Marshall, a competitor of Thermax in steam engineering and a personal friend, says, “Meher never tells people what to do; but always asks." Deep Anand, chairman, Degremont, a competitor of Thermax in the waste management space, admits that he has appointed Pudumjee on his board because “as a young corporate leader, I see her as a great role model for my daughter who will take over the business. Meher will never take the soft option." And Gautam Thapar, chairman, Crompton Greaves, says he values Pudumjee as an independent director on his board because “she doesn’t shy away from asking questions directly until satisfied and often looks at the softer aspects of what we do."

These days, as oil prices hover around the $100 a barrel mark and alternate energy sources become crucial, companies such as Thermax offer solutions to environmental problems that will get heard louder. Fittingly, in a recent article in Thermax’s in-house journal, Fireside, Pudumjee reveals that her vision for Thermax is that of an orchestra, where “you are as good as your weakest link, and where every voice or instrument has to play its part perfectly, througha spirit of teamwork and seamlessness."

Represented India at the Asian Business Women’s Conference in Osaka

(Personal Space runs every alternate Friday and looks at the pursuits beyond work of some of India’s corporate leaders. Write to Sangitaa Advani at personalspace@livemint.com)

(Write to us at businessoflife@livemint.com)