The Avril Lavigne of Paschim Vihar

The Avril Lavigne of Paschim Vihar

New Delhi: The best thing that can be said about K. Chaudhry’s voice is that it is strident. It emerges strongly and substantially from his larynx. But really, that is all. Otherwise, it only frequents those positions on the musical scale that are absolute No Man’s Land for notes, positions from where there is no music to be derived at all.

None of this, however, has impeded his rise to fame as a singer. In 17 months, Chaudhry has recorded and uploaded on YouTube 1,116 videos of himself singing not only Hindi film songs, but also Haryanvi-accented American numbers such as Avril Lavigne’s Skater Boy, Bob Marley’s Bad Card and Madonna’s Frozen. Almost without exception, they are all YouTube hits. 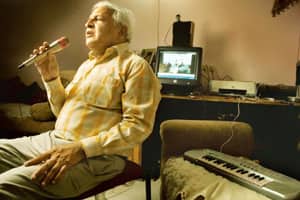 Amateur feat: K. Chaudhry is a popular YouTube singer, with his version of ‘Skater Boy’ being viewed 47,310 times. The 65-year-old spends nearly 17 hours on his computer and has uploaded as many as 12 videos a day. Harikrishna Katragadda / Mint

Six hundred people subscribe to his channel, and most of the time, he is being awarded titles such as “#10–Most Viewed (This Week)–Musicians–India", having outranked even authentic music videos from new films. His version of Skater Boy has been viewed 47,310 times; Lavigne’s own version has been viewed 130,482 times. His hottest videos sit atop pages of comments, and perhaps most surprisingly, not all of them are snarky. (luqman1265: “when im sad i listen to your voice it brings me joy. carry on singing uncle your great.")

As broadband rates have dropped and familiarity with the webcam has improved, YouTube’s popularity in India has exploded. ComScore reported that 6.3 million Indians had visited YouTube last May, a 131% increase over May 2007, the most for any Google property; in April, the number stood at 9.8 million. Along the way, YouTube has become a perfect vehicle for video kitsch, giving forgotten B- and C-movies a magnificent second life and creating improbable new stars such as Chaudhry.

Last May, when YouTube officially launched in India, Chaudhry was invited to make the welcome speech. “We were looking at different examples of people who had uploaded videos and had experimented with YouTube, and he was one of them," says Arvind Desikan, head of consumer marketing at Google India. There was an amateur magician and some others, he added, but none quite in Chaudhry’s realm.

In all his videos, Chaudhry sits in a swivel chair and starts up karaoke software on his computer. As the music begins to play, he retracts into his default posture of rest: swivelling in little arcs to his right and left, elbows on the arms of his chair, right hand loosely on his left, fingers drumming hopelessly out of sync, waiting for the cue to start. Then, as in Skater Boy, he leans forward, his head cocks to his right, and he begins: He was a boy/She was a girl/Can I make it any more obvious?

“I like singing, so I do it. But I know fully well that I’m a bad singer," Chaudhry, a 65-year-old retired general practitioner, says. “In college, I was once riding pillion on a bicycle with a friend, and he asked me: ‘There are so many hobbies out there you can choose. Why do you insist on singing if you have such a rubbish voice?’"

This breed of persistence has marked Chaudhry’s life. In 1999, when it struck him to develop an astrology software, he learnt the programming languages C and PHP, to then write the software himself. When he sat for his final oral examination for his medical degree, in 1970, the examiner asked him questions out of a medical textbook written by Chaudhry himself.

In January 2008, when Chaudhry first discovered YouTube and then karaoke, he pounced on them as his final shot at fame. He is in front of his computer nearly 17 hours out of 24, and has uploaded as many as 12 videos in a day. “The English ones give me some trouble, so it takes a few hours for me to get the lyrics and tune right," Chaudhry says. “The older Hindi songs I can do even in 20 minutes." He dislikes no genre: “Even rap, if I can understand the words, I’ll sing."

Chaudhry’s forays into karaoke are one type of kitsch; another is the wealth of old Indian movies and songs that have been uploaded on YouTube. In Tamil Nadu, a B-movie actor named Sam Anderson has gone from utter obscurity to inordinate popularity; some of his YouTube clips have been watched nearly 200,000 times. An old song titled If You Come Today, sung by Kannada superstar Rajkumar in the film Operation Diamond Racket, is now fast approaching half-a-million views. Ray points out that producers of these otherwise-defunct movies can often make money from clip sharing. “I bought Pyasa Haiwan after I saw two clips of it on YouTube which…were sensational," he says. The film has attracted over a million views. “Without YouTube, I would have never heard of this movie nor been exposed to the four minutes of mind-numbing awesomeness which persuaded me to buy it. How would I ever be able to get hold of…ribald songs from the cow-belt and disco-dancing vampires?"

The popularity of kitsch is not, Desikan thinks, an India-specific phenomenon, and he cites the multiple covers of an eastern European song called Numa Numa as an example of kitsch that went viral in America. In India, he says, the peak is still ahead: “It may take a while longer, or it may play out differently here."

But India certainly has a treasure trove of kitsch waiting for its moment in the YouTube sun. “We do produce a lot of camp, and if I might say so, excellently imaginative camp," says Ray. “Our C-graders beat their C-graders any day."

And C-grade material, Ray goes on, is disarming in its blunt authenticity. “(It’s) unpretentious and simple. Maybe the entertainment they provide is often not delivered the way they mean to, but that’s all right," he says. “It is in many ways a more honest attempt at entertainment than the over-marketed and pretentious"—and Ray classes most Bollywood products in this category—“which is often just as bad, minus the endearing-ness".

In its essence, YouTube is a website created by amateurs for amateurs, and perhaps that forges a bond that ignores the professional. Two other singers from his neighbourhood, Chaudhry remarks, have perfect voices, and when they heard of Chaudhry’s success, they started uploading videos of themselves. They got, Chaudhry says without a trace of triumph, very few hits.

“You know, the technically sound singers tend to fix only on the mistakes you make—and I make a lot of mistakes," he says. “But on YouTube, I’m not a good singer, you’re also not a good singer, and so you watch me. I have found an audience that is on a par with me."