A devil of a decision: Onida mascot to RIP

A devil of a decision: Onida mascot to RIP

New Delhi: One night in the early 1980s, a model coordinator named David Whitbread was working on a campaign shoot for advertising agency Avenues. It was on the terrace of a Mumbai building, Whitbread remembers, because they weren’t able to get any studio space. As the shoot wound down, Gopi Kukde, Avenues’ art director, pulled Whitbread aside to talk to him. 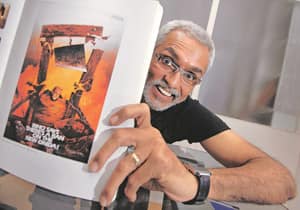 Father of the devil: Gopi Kukde had decided to tether Onida advertisements featuring the devil to the emotion of envy. In the late 1990s, the focus shifted from that emotion and the devil went into limbo for the first time. Abhijit Bhatlekar/Mint

In the monotonous near-beige of Indian advertising in the 1980s, the Onida devil—still remembered by Whitbread’s buffed pate, his fingernails that verged on talons, and his sardonic smile—rapidly became a streak of bold colour, a negative character smartly and subversively turned into a selling point. The character and the brand would become so indelibly linked that some of Kukde’s spots didn’t even need to feature the word “Onida" or its logo.

Krishnamurthy Sriram, vice-president (marketing, sales and service) at Mirc Electronics Ltd that owns the Onida brand, estimates that the devil single-handedly pumped Onida’s market share in televisions up from 5-6% in 1981 to 19-20% at the campaign’s peak—which came just before 1995, when it won the Abby Campaign of the Year award. Sriram admits that the mascot still generates instant recall; nevertheless, Onida has now taken the difficult—some say inexplicable—decision to banish its devil, and to unveil an entirely new advertising thrust on 15 September.

When he first spoke to Whitbread on that terrace, Kukde, the devil’s father, so to speak, had already decided to tether Onida to the emotion of envy. “At the time, Onida was a poor man’s Sony, and BPL and Videocon were ahead of us," Sriram says. “But all these televisions were talking technical specs in their ads, which sounded like Latin and Greek to people." Kukde figured that people might buy TVs as a status symbol, to keep up with their neighbours; thus the pithy tagline, “Neighbour’s envy, owner’s pride".

Whitbread needed a little convincing. He had no desire to be an actor, and he would be required to shave off what Kukde recalls as “a very nice" moustache.

“David has an unusual structure—he always looks naughty, as if he’ll come up with a prank in a minute or two," Kukde says. “We wanted our devil to look cute and different."

That first TV shoot, in late 1983 or early 1984, was a seconds-long capsule of Kukde’s ambition for the brand. A TV stood in gloomy silence, until a stone hurtled into the frame and smashed its screen. A few dense puffs of smoke later, Whitbread’s face emerged from behind the TV, smiling demonically. Cue incredibly catchy tagline.

“Gopi had made me horns and a tail out of wire and foam, and eyebrows out of cut-up false moustaches," Whitbread says. To drape around him, he received a stretch of fabric, burnt at judicious intervals by candles to appear ragged. “I said: ‘Gopi, I’ll be half-naked in this!’ He asked me not to worry." The entire day’s shoot paid Whitbread Rs5,000-6,000; a couple of weeks later, his face had been hoisted onto billboards all over Mumbai.

Whitbread played the devil for the next 14 years, turning up for a few days every year to sit through three-hour make-up sessions and the subsequent shoots. (Only once, asked to pose with a snake, did he refuse to proceed; Whitbread is petrified of snakes.) In the very late 1990s, however, Onida moved to a different agency, and the devil moved into limbo for the first time.

“After liberalization, people were more secure, more individualized, making more decisions for themselves—so envy didn’t enter into it," Sriram says. “We felt that playing on envy didn’t have any meaning, so we moved away from the devil." For five years, Onida made many non-devil commercials, but they did not, he feels, help build the brand further. In 2004, the devil returned in advertisements crafted by Rediffusion DY&R Pvt. Ltd—more preppy, more suave, and most emphatically not Whitbread.

“We made the devil more contemporary," says Mahesh Chauhan, chief executive of Rediffusion DY&R. “We brought in new faces, we refreshed the look, and we reinterpreted the envy part of it." The new look—with its dark, cape-like coat—reminded Rajesh Khera, the first of the three new devils, of Keanu Reeves in the Matrix movies. “Even the attitude changed from Whitbread’s devil," Khera says. “My brief was: You are the best. You look down upon the rest. No one messes with you."

But in its second iteration, the devil appeared to experience a crisis in identity. Kukde says the “poor thing" was turned into a salesperson—“but he isn’t a salesperson; he’s a superior being, he governs your mind". Khera, who was recognized as the Onida devil in the remotest of towns that he visited, wonders why “they insisted on making me speak lines. I couldn’t relate to that".

Aamir Bashir, who played the devil for a year-and-a-half until his contract expired in June, sensed “a little bit of confusion…at the conceptual level. There were people who were not sure which way to go. They wanted a friendly devil at times, a sweet devil at times—and what’s a devil if he isn’t devilish?"

Bashir picked up on the confusion even when he was signing the contract. “The tagline was also outdated, since everybody has a TV now," Bashir says. “So it was kind of inevitable that the campaign was on its last legs."

Onida’s reason for abandoning the devil now is, in a sense, the same reason it had abandoned him in 1999. “The emotional connection of envy has been lost, and as a representative of envy, the devil just doesn’t have a place here," Sriram says. With its current agency, McCann Erickson India Ltd, Sriram sees Onida moving “into a more modern India sort of positioning, focusing on how gender barriers are crumbling in Indian families, and how absolutely anybody can operate our technologies now".

Rediffusion DY&R’s Chauhan, for one, does not quite buy that logic. “I hear these people say that the envy is no longer relevant, and I don’t understand it. Envy is always relevant," he says. “To claim that nobody experiences envy any more is stupid. It’s the context of the envy that counts. Agencies should now maybe look at it as an enviable technology, not just as neighbour’s envy."

The devil made the core of the Onida brand an emotional one, Chauhan reasons, and that will be difficult to change.

Appropriately enough, it is Whitbread who provides the most convincing argument for not quite throwing away the horns and cape yet. “In Mumbai just the other day, I was jogging in the park near my house, and this really young guy, maybe 22 years old, crossed my path," he says. “Then he stopped and turned, and he asked: ‘Weren’t you the Onida devil?’"

At 22, he couldn’t have seen too many of Whitbread’s ads on TV. “How did you know?" Whitbread asked him. “‘I just remember the devil,’ the young man said, and then he turned and jogged away."

Gouri Shah in Mumbai contributed to this story.