New Delhi: The new board of Air India set a 30-day deadline for preparing a turnaround plan for the loss-making state-owned airline on a day when it also appointed Gustav Baldauf as its chief operating officer. 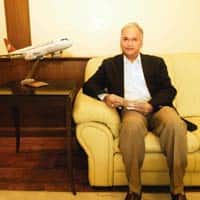 The new turnaround plan will effectively replace a previous one proposed by the airline in August.

The government has already infused Rs945 crore into Air India, most recently through two infusions totalling Rs800 crore in February and March, but has said that further help will depend on the ability of the airline to put its finances in order and cut costs. Air India, until recently, had a low equity capital of Rs145 crore and has lost in excess of $2 billion (Rs8,900 crore today) over the past two years.

Baldauf, a former employee of Jet Airways (India) Ltd and Austrian Airlines, whose appointment will have to be approved by India’s cabinet committee on appointments, was chosen by the board that includes Anand Mahindra, vice-chairman and managing director of Mahindra and Mahindra Ltd, Federation of Indian Chambers of Commerce and Industry general secretary Amit Mitra, industrialist Harsh Neotia and Air Chief Marshal (retired) Fali H. Major. The airline’s chairman and managing director Arvind Jadhav made a presentation on the state of the airline to his fellow members on the board.

One of the members of the board struck an optimistic note after Tuesday’s meeting.

“With the new board, I am pretty sure (of a turnaround)," said Major, who described the challenges facing the airline as not insurmountable. “It’s not going to happen tomorrow. Our aim is to do our very best to offer our experience and see that it turns into one of the finest. I am personally very hopeful. Its our national carrier."

The four new board members will each head a committee overseeing a key function. The four committees were set up by the board on Tuesday. Mitra will be in charge of the human resources (HR) committee, Mahindra will have to look after finance, Neotia will take care of audit, and Major will look after strategy and HR.

Major said that the board’s participation in running the airline would increase.

“We listened to everybody, we have given a clear cut timeline of what we want and the feedback that we need," he added.

“Our business is to advise the airline; we will have to meet more often than boards normally do."

The government needs to sign off on the airline’s turnaround plan. This will come after the civil aviation ministry prepares a note on the basis of the turnaround plan prepared by the new board and send it to the Union cabinet, said an employee of the airline who did not want to be identified.