Kochi (Kerala): Police found the woman wandering on the streets of Kochi in a gauzy, mud-splattered salwar kameez. Emaciated, with matted black hair, slack jaws and a vacant gaze, she couldn’t remember her name or where she belonged. She was taken to a local magistrate, who declared her mentally unfit and placed her in Kauffernaun, a half-way home for the disabled, abandoned, destitute and mentally ill.

“This is what we found after we tried to clean her," says Sister Juliet, who runs the home, sliding a photograph across the table. The picture is a close-up of the back of the woman’s head. The matted hair had been removed to reveal a chunk of her open skull, riddled with squirming white maggots. She died three days later of heart failure.

The Catholic nun has seen many such cases in her nine years at Kauffernaun, where most of her wards will live until they die. Few will receive full treatment. Such an end often represents the best-case scenario for India’s growing numbers of homeless mentally ill.

Nationwide there are only 37 state-run mental hospitals—a fraction of the number required. In northern India, homes providing long-term care to people with mental illness are virtually non-existent, and the wandering mentally ill become indistinguishable from thousands of beggars in the streets, or migrant workers sleeping on sidewalks.

Two years after former model Gitanjali Nagpal was found begging on the streets of a south Delhi neighbourhood in a confused mental state in 2007, the Delhi high court ordered the government to create wards for mentally ill women in shelter homes within three months. Three years later, little has changed. Four half-way homes have been sanctioned, but none has actually been built.

In southern states, a number of privately run half-way homes have emerged to meet demand. But lacking the resources to meet more than basic necessities, such homes have recently come under fire for their abysmal conditions. In Kerala, the few that exist are now in danger of being shut down.

“Homelessness among mentally ill is growing significantly—it’s really become my major concern," says Nimesh Desai, the director of the department of psychiatry at the Institute of Human Behaviour and Allied Sciences (IHBAS), Delhi. “I am getting more and more convinced that in public mental health, the final frontier is the issue of mental illness and homelessness." 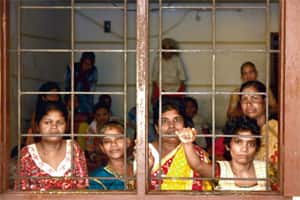 Nowhere to go: Mentally ill women staring out of a room at the Capernaum Charitable Trust in Kochi. Sivaram V/Mint

The ministry of health and family welfare estimated that at least a quarter of India’s mentally ill are homeless.

Today, those numbers appear to be growing—and not just among the poor. Psychiatrists in government hospitals observe growing numbers of mentally ill homeless coming from educated, middle-class backgrounds. “I have seen post-graduates and PhD-qualified people who are mentally ill living on the streets," said Desai. “It’s an issue that cuts across class and caste."

Yadagiri was one such man. A 32-year-old with a degree in electrical engineering who lived with his parents in a city outside of Chennai, he began exhibiting signs of schizophrenia in his early 20s—having paranoid delusions, and talking to himself. One day when his symptoms were bad, he wandered out of his house, only to be found by a police officer more than 250 kilometres away in Kerala, who placed him in Prathyasa Bhavan, a home for destitute mentally ill in Kochi. “He was here for a year and a half," says Ammni Varghesekutty, who runs the home that treated him.

Yadagiri was lucky—he responded well to treatment, and was accepted back into his family. “He didn’t know who he was or where he came from when he came. We gave him treatment and eventually he got well enough to remember where he was from. We returned him home," says Varghesekutty. Unfortunately, few patients share Yadagiri’s happy homecoming.

“What’s happening with mental illness is what is happening with many social problems in transitional society," says Desai, adding that the strong family and social networks that used to provide support to people with mental illness are breaking down. Many families are no longer able or willing to take care of mentally ill relatives so they end up on the streets, he says. But while the governments of developed countries have organized systems in place to help treat the mentally ill, India is yet to make that transition, he adds.

Countrywide, India has approximately 3,500 registered psychiatrists. In practical terms that means three psychiatrists per one million people. Nearly 80% of India’s districts do not have any mental health-care facilities. And long-term care centres are almost entirely absent.

“I calculated sometime ago that, by conservative estimates, we need at least 100,000 vacancies for long-term residential care," says Desai. “But right now we only have 2,000 throughout India."

In the southern states, the dearth of government-approved, professionally run facilities has led to the emergence of a growing number of small, unlicensed privately run homes. In most cases, the homeless are identified by the local police, who, after obtaining approval of the local magistrate, route them to such homes.

While exemplary homes do exist—a Chennai-based home for destitute mentally ill women called Banyan has garnered international recognition for its model rehabilitation programme—most leave much to be desired. The dire state of India’s mental asylums has made sporadic headlines since 2001, when 26 mentally ill people died in a fire at Moideen Badusha Mental Home in Tamil Nadu. Chained to their beds, they were unable to escape.

Following the Erwadi incident, the Supreme Court ordered that all such homes obtain licences prior to opening. But five months ago, the issue resurfaced again when another small, unlicensed, privately run home in Thrissur was raided by the police after neighbours complained of foul smell.

Inside, 70 mentally ill men were found chained to windows. Others were sitting in years of accumulated filth.

Shortly after the Thrissur case, a non-governmental organization, Human Rights Law Network, filed a petition in the Kerala high court requesting that the Mental Health Authority mandate licences for all institutions treating or housing mentally ill patients, or shut them down. The authority responded with a counter-petition that all the homes that do not become licensed will be shut down.

But obtaining a licence is next to impossible under the law: Kerala’s mental health policy dictates a doctor-patient ratio of one to 100—an impossible-to-meet requirement in a country with three trained psychiatrists per one million people. There are also specifications on staff strength and infrastructure requirements that sound good on paper but clash with the on-the-ground reality.

While the Planning Commission has not yet announced the size or scope of the outlay for the 12th Plan for treating mental illness, “we certainly hope for an increase," says Keshav Desiraju, the additional secretary for health and family welfare.

Desiraju is part of the technical committee working on a draft of a new mental health act since January 2010 that aims to replace the Mental Health Act of 1987. Though he does not have a definite timeline for completion, he hopes it will be introduced in Parliament soon.

One improvement in the proposed new act is the establishment of a registry and guidelines governing half-way homes catering to mentally ill with no place else to go. It also attempts to address issues surrounding guardianship and human rights neglected in the Mental Health Act.

But some say the proposed new act does not go far enough. “India was among the first countries to sign the UN Convention for the Rights of People with Disabilities, but has yet to align its policies with the UN convention," says Javed Abidi, director for the National Centre for the Promotion of Disabled People.

Abidi complains that the proposed legislation also neglects key issues—like how to address the question of legal capacity (the ability to decide on issues such as the right to marry or whether to be admitted to a mental institution). “It’s been two years already and the Bill is still very far from Parliament," he says. “Anyway, it’s a very sad commentary on how badly these issues are neglected."

Lacking government funding and running primarily on charity, most homes in Kerala are unlicensed, operate under the government radar or regulation, and are unable to afford anything but the basics.

Sister Juliet relies on “helpers" among the inmates whose circumstances are less extreme. In the men’s ward, more than 70 boys and men are confined to two floors by sturdy iron bars and heavy padlocks, left to their own devices for most of the day. At night, they share sturdy wooden cots stinking of urine. The worst affected—delusional and violent—live side by side with those who have only mild mental disabilities. In the women’s ward, one inmate wanders aimlessly from her bed to a small bathroom while another jumps up and down on a small metal cot.

In the north, no homes exist for the mentally ill. IHBAS runs a bi-weekly mobile health clinic near the Jammu Masjid Mosque in partnership with the local magistrate and Aashray Adhikar Abhiyan (AAA), an NGO that runs homeless shelters in the capital. Over the past three years, they have managed to treat more than 42 severely mentally ill people, but a lack of resources limits their reach. “If we could evolve a model of half-way homes in combination with functional community-based treatment and mobile clinics, few people would need institutionalization," says Paramjeet Kaur, the director of AAA. “It’s lack of governmental will, more than anything else."

This is the concluding part of a series on mental illness.