Banking on yoga in more ways than one

Banking on yoga in more ways than one

Alwar, Rajasthan: At 4.30am, the streets are thronged. Silent and purposeful, grandmothers and grandchildren, recluses and couples, those with plenty and those with none, make their way toward the town centre.

96277f88-21e4-11dd-b760-000b5dabf613.flvThey arrive at a stadium where, clad in saffron robes and elevated on a platform, sits Baba Ramdev, a hirsute guru they may have previously only encountered on his daily yoga show on Aastha TV, dutifully watched by 20 million Indians at 5.30am, and countless more in different time zones.

Charismatic, and as ready with a quip as a social mantra or medical cure, the guru is in town to host one of his famed shivirs, or yoga camps, where all but the poorest pay a mandatory “donation" up to Rs1,100 each for instruction from their swami over six days.

From humble beginnings as the son of illiterate peasants in Haryana, the man born as Ramkishan Yadav has spawned an impressive movement rooted in yoga, natural healing and breathing techniques. But, concealed under the ascetic exterior is a savvy businessman; besides the television show, there are books, CDs, DVDs, oils, medicines, clinics, camps such as this one. Later this month, he will launch an eight-day yoga and meditation package on the SuperStar Virgo Cruise from India to Hong Kong and Xiamen in China, then onto Halong Bay, Vietnam. After being subsidized by a corporate sponsor, the price tag to cruise with the swami: Rs80,000. 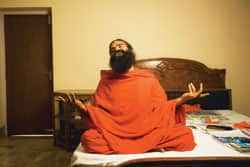 But, undeniably, Ramdev has played a role in injecting new life into yoga among the masses in India, mainly through his advocacy of pranayama, or breathing exercises. His entry into the mainstream reflects the pendulum swinging back to traditional healing, a return to ancient practices and a more holistic way of life. His support base includes politicians and celebrities, business leaders and housewives, eagerly trading his remedies over tea and biscuits, wine and cheese.

Among the 10,000-strong crowd swelling before the swami in the pre-dawn light is Vijay Data and his family. The managing director of food products company Vijay Solvex, Data has foot the entire bill, about Rs20 lakh, including ground’s rental, publicity and advertising. For this week, Ramdev and his entourage are put up at Data’s Alwar mansion, outfitted with baby-blue Jacuzzi bathtubs. “We see it as a type of charity and a cause for society," Data says. 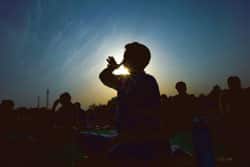 “Baba Ramdev has carried yoga, which was previously confined to the elite class, to the masses through the electronic media," says Arvind Joshi, head of marketing at Aastha TV, on the phenomenon the show has helped to create. “He gives very simple solutions to every problem."

In a nod to the guru’s pulling power, the channel charges Rs3,500 for 10 seconds of advertising time during his show, compared with the upper limit of Rs2,500 at other times. He contributes nearly half of Aastha’s Rs1 crore ad sales.

Sponsorships have been key to his success. As with the camps, financial sponsors will cover part of the cost of the upcoming cruise. The cruise company has subsidized the fare, and the organization and advertising costs are being covered by the Vishwa Jagriti Mission Trust, a Kolkata-based non-profit which aims to revive “the spiritual and cultural richness of India". Money generated from devotees at the camps and cruise—and funds raised from sales of medication, as well as the Hindi and English publications, CDs and DVDs—are ploughed back into his Divya Mandir Trust, a social welfare service and research centre.

Both Ramdev and Aastha TV declined to divulge financial details of the trust. The guru says costs exceed income, and puts last year’s expenditures at Rs156 crore—a figure that could not be verified independently.

Furthermore, Ramdev says funds go towards medical research, and investment in the Patanjali Yog Peeth being built in Haridwar, which aims to become the world’s biggest centre for Ayurveda and yoga. Also in the works: a university, laboratories, an outpatient clinic and a research institute.

“A holy man once asked me to drink water from the Ganges," he begins a signature crowd-pleasing story to Alwar’s townfolk. “And I did not want to tell him there is no way I could drink that water, with all the urine and faeces in it, so I pretended to drink it but let it pour down my arm."

“I don’t think he noticed," he adds, to applause and a burst of laughter.

The guru alternately charms, humours and hectors his followers, offering tips on eating habits to child rearing with dry wit, in between yoga poses.

Unlike leaders with a religious bent, however, Ramdev’s appeal lies in his accessibility and the simplicity of his message, which eschews the didactic approach traditionally favoured by men of God.

“Health is the fundamental right of all human beings," he says, speaking Hindi in an interview with Mint. “My work is my worship, and this is my definition of religion. I do not follow the symbolic aspect of religion." But, he wouldn’t dispute the idea, espoused by followers, that he is larger than life.

“I am not an individual being; I am a nation," is his rallying cry, appealing to Indians of all ilk with its populist message. “Politics is not my aim but if ever the pride of my nation is hurt, then it is a matter of disgrace to every Indian. If my nation were not there, then how would I be here? My countrymen made me big, so I am duty-bound to serve my country."

Ramdev’s passion for medicine and science filters to his three core beliefs: population control, enforced suffrage and an embracing of “swadesi" education and economy. He asks followers to adhere to a “zero-technology" lifestyle, away from artificial products. Cosmetics, colas, fast food and salt all feature on his black list, while he reserves his harshest words for multinational companies, which he says suppress home-grown industry.

“Multinational companies should not be allowed to loot our nation," he asserts. “We should take the help of multinationals for the development of science and technology. But, do not let them loot our country and dampen its glory."

Although his remedies find favour among his supporters, Ramdev’s claims to be able to cure illnesses from diabetes to cancer have provoked the ire of medical professionals.

“Baba Ramdev’s claim to be able to cure cancer and diabetes are all false claims and tall tales," says Mohammed Abbas, national president of the Indian Medical Association. “He tells his followers not to take allopathic medication but, then, sells his own Ayurvedic medication to the tune of crores."

Ramdev explicity claims that yoga and pranayama, in tandem with medicine prescribed by trust doctors, have rid patients of seemingly “incurable" diseases such as cancer.

In place of hard scientific data, his evidence constitutes questionnaires and testimonials from sufferers who claim to have been cured of all types of cancer, despite having been told by doctors practising conventional medicine that there was no hope for their condition. The remainder of the evidence comes from patients’ medical reports, issued before becoming a yoga practitioner, and after, which claim a marked improvement.

Among the teachings that have helped propel the self-professed “life scientist" into the public eye, is his belief in the healing qualities of “the power of life".

“Using the power of life, I have cured several ailments," Ramdev claims, seated cross-legged on his bed, flanked by his personal secretary, public relations manager and a financial sponsor. “They were using medicines; salt-based or hormonal. But, I have removed those very salt, chemical or hormonal imbalances from within them. I have used pranayama to correct their systems and thus a new form of treatment is being introduced and gradually coming to be accepted."

I.S. Gilada, secretary of The People’s Health Organisation, a non-governmental organization that works to prevent and control the spread of HIV/AIDS, calls Ramdev’s plea to abolish sex education in schools “a retrograde step". He describes the guru’s cures as “magical remedies".

“We have all respect for him and his yoga but, he is overstepping his limitations," said Gilada. “Baba Ramdev should talk about yoga, good health, and its connection to arthritis, or lifestyles. Yoga can be an adjunct for the treatment for HIV/AIDS, but it cannot replace ongoing medication."

Ramdev, who lists leaders and revolutionaries such as Chhatrapati Shivaji Raje Bhosle, Subhas Chandra Bose, Bhagat Singh and Chandrasekhar Azad, as inspiration, remains unmoved by his critics, having rebutted accusations two years ago from communist parliamentarian Brinda Karat that human bones and animal parts were used in the herbal drugs produced by his pharmacy. Karat declined to be interviewed.

“So far, no clinical controlled trials have been conducted on Ayurvedic medicines, which is why such questions are raised," says Baba Ramdev, blaming a bias in favour of conventional medication. “We intend to start these trials on Ayurvedic medicines. Then, once the trial results are out, no one will be able to raise questions or controversies."

The tens of thousands of people who attend his 40-odd shivirs each year come in the hope of finding the cure to an illness, in an attempt to get fit, or are motivated by curiosity.

Anita Jain, a 43-year-old schoolteacher who lives in Alwar, is being treated for lumps in her breast through conventional medicine. She does not believe in a cure, but finds “the yoga is relaxing".

In the queue at the outpatient clinic, held every day during the camp, Santosh Khardelwal sits patiently, holding her three-year-old adopted son Krishna. “The child can’t walk, so I am bringing him here," she says, adding that she first encountered the guru on television when his medical advice, dispensed on an evening slot on Aastha TV to callers from across the country, helped solve her gas problems.

As the close of the shivir signals the break of day in Alwar, and the crowds begin to disperse, three burly men lift a man in a chair and inch towards the guru. They painstakingly carry Deendayal, a 26-year-old labourer paralysed from the waist down after falling off the side of a building.

He has endured two years of treatment, including surgery and physiotherapy. Nothing has worked. And so his family turns to the guru, and his traditional forms of healing, in a final bid to get their brother back, with hopes Baba Ramdev can succeed where others have failed.

Julie Merin Varughese in Mumbai contributed to this story.