New tech colleges can be set up on 1.5 acres in cities, 7.5 acres in rural areas, down from 2.5 and 10 acres respectively

New Delhi: Technical education regulator the All India Council for Technical Education (AICTE) has reduced the land requirement to set up engineering schools, along with ushering in measures to improve quality, facilitate closure of ailing schools and tide over chronic shortage of teachers.

According to the new approval process document that AICTE has prepared for technical schools for the coming academic year, new engineering colleges can come up on just 1.5 acres of land in mega and metro cities and on 7.5 acres in rural areas. Mint has reviewed a copy of the document.

Earlier, the requirement was 2.5 acres and 10 acres, respectively.

The move is seen as an attempt by the AICTE to tide over land crunch in the country and also reflects the new thinking that the horizontal sprawl of an educational institution is no longer required in the present context.

Instead, institutions have been encouraged to go vertical, up to 10 storeys, provided building by-laws in the region allow such construction.

That plan is yet to be finalized. 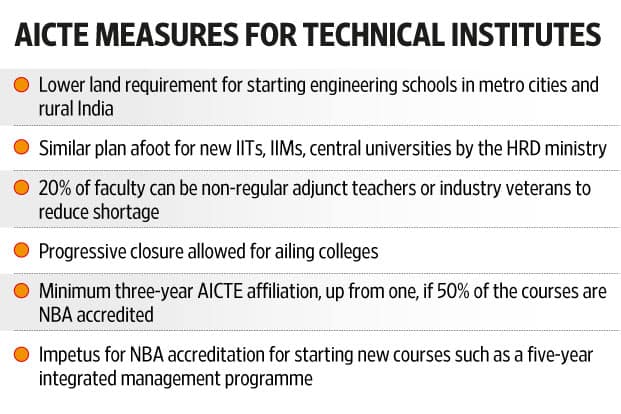 “For the past year, HRD ministry has been debating about reduction in land requirement. AICTE administration believes horizontal sprawl is no more possible or desirable in education sector," said a government official, requesting anonymity.

Under the new approval manual, the regulator has decided to grant affiliation to technical institutions, such as engineering and management schools, for a minimum period of three years if at least 50% of the courses offered by them have been accredited by the National Board of Accreditation (NBA). Right now, all technical institutes are required to apply for fresh affiliation every year from the AICTE.

Technical schools, especially the reputed ones, have been demanding affiliation for longer duration.

“In the case of institutions having at least 50% of eligible courses accredited by NBA, and if the valid accreditation period is more than one year, that is, up to 10 April 2017, the period of approval for such institutions shall be for a period of a minimum of three years, or the academic year up to which the accreditation is valid—whichever is more," stated the AICTE document. It has also made NBA accreditation an enabler for increasing student intake and starting courses.

Some 11,000 technical schools function under the purview of AICTE.

The regulator has also brought in a measure allowing for “progressive closure", under which ailing technical schools will find it easier to shut shop. It will allow an educational entrepreneur to shut a college over a period of time. The move will thus take care of students who have already taken admission.

“The institute may apply for complete closure or progressive closure. In the case of complete closure, the institute shall be closed completely in one instance. In the case of progressive closure, closure at the first-year level shall be allowed in the current academic year. The subsequent years of working shall lapse at the end of each academic year progressively," the regulator said in the document.

The move is in line with the AICTE’s plan to cut the number of engineering and management schools that have mushroomed in the last few years. It aims to reduce total number of undergraduate engineering seats by as much as 40%, or by 600,000, over the next few years by facilitating the closure of institutes, Mint reported on 20 September.

Besides, it has allowed technical schools to have 20% guest faculty, a move that both education providers and administrators believe will address the teacher crunch and improve industry collaborations.

The AICTE said that 20% of the teaching staff in a technical school can be appointed as adjunct faculty, or resource persons, from industry.

“The 20% relaxation in faculty recruitment will allow us to bring people with industry experience. This will improve the industry-academia relationship and help tide over teaching staff shortage," said R. Panicker, the director general of Indo Global Colleges, a chain of private professional colleges in Punjab.