This is one region where the Indian rupee travels a longer way. Of the 16 cities from 15 countries in Australasia, five cities have an index value below Delhi’s. The five are led by Siem Reap, Cambodia (25% lower), followed by Kathmandu, Bali, Hanoi and Dhaka.

A unique trait of the cheaper end of Asia is that accommodation costs here don’t dominate the overall travel basket in the way they do in other regions. Four of the five cities with the cheapest hotel tariffs are from this set. Another contrarian feature of this set is that homestays don’t usually work out cheaper.

These cities score in the other big thing moving the cost needle, one way or the other: shopping. Siem Reap promises the most pocket-friendly shopping experience in the region. It is 45% cheaper than Bali, the second-best. Both these cities, along with Dhaka and Kathmandu, are cheaper than Delhi in terms of shopping for a pair of jeans, a summer dress and shoes, though the range of goods they offer might be far narrower. Bali apart, the above cities are also cheaper for dining out than Delhi. 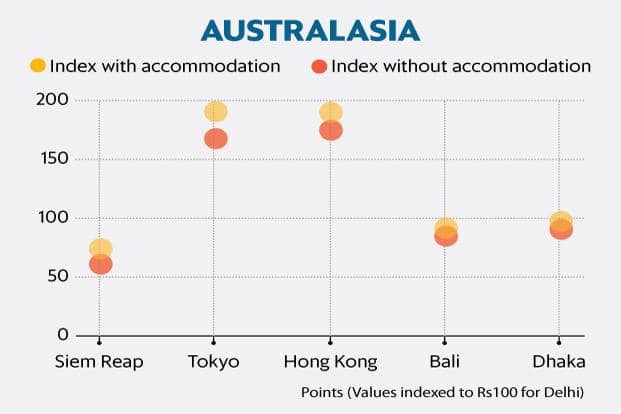 A similar Asian presence is, however, not seen for items like wine, milk, coffee, bread, cheese or apples. For wine, for example, the cheapest Asian city (Siem Reap) is ranked 16 overall. For local beer, while Siem Reap and Hanoi are the cheapest, there’s only one other Asian city in the top 10.

Even some of the more popular Asian destinations are not that far from Delhi in terms of cost. The index value of Kuala Lumpur is 27% above Delhi and Bangkok 39%. Further down are the Chinese cities, Tokyo and Singapore. The most expensive are Auckland and Melbourne. Even Melbourne, with an index value of 208, works out to be cheaper than several cities in Europe and North America.