Stir against migrants a body blow to Tata

Stir against migrants a body blow to Tata

The exodus of north Indians from the city in the aftermath of a political campaign to boot them out and give jobs to Maharashtrians has created problems for the country’s largest commercial vehicle manufacturer, Tata Motors Ltd, according to vendors of the firm.

This is the first major sign of the possible business fallout of a campaign to evict migrant workers, led by the Maharashtra Navnirman Sena (MNS), a regional political party that is attempting to build loyalists among the indigenous population. 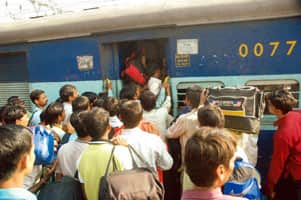 One vendor who supplies parts to Tata, said the company has been forced to cut down production of the Ace, of which it produced 5,000 units in January, to one shift from the usual two shifts. He and other vendors who spoke to Mint asked not to be identified because it would affect their relationship with Tata. On Saturday, production of the Ace, whose popularity has resulted in a number of competitors launching similar vehicles, was cut down from the level of 200 a day to just about 90 units. On Sunday, the firm made around 125 units, but production will continue to remain at reduced levels, the vendor added.

“We are trying to cope with the situation as best as we can," said a Tata Motors spokesperson who did not discuss the production cuts.

The vendor quoted in the first instance said it would be difficult for the company to increase production soon because “workers have fled the state and are now not expected back till after Holi, which is an important festival in the north Indian calendar." Holi falls on 22 March this year.

The Pune plant of Tata Motors currently manufactures 60,000 units of the Ace a year. The company’s total installed capacity for the model and its variants is 225,000 units a year.

The exodus of migrant workers began after MNS leader Raj Thackeray was arrested in Mumbai in early February for his comments against north Indians in the state. Since then, more than 200,000 migrant workers from Bihar and Uttar Pradesh who work in various factories and construction sites in Pune have left for their homes fearing a violent backlash, say local industry bodies.

The Tata vendor added that the Ace is the worst hit because around 90% of the components used in this vehicle are outsourced, as against the 60% for other Tata vehicles. The Ace was conceived by the firm in 2005 as a low-cost goods transporter and the company chose to outsource even larger parts and assemblies that it usually makes itself for other models.

Another vendor familiar with the development said in one instance, Tata Motors actually helped a key vendor who supplies a large number of components for the Ace, by lending welders from its factory in order to ensure supplies were not hit after his north Indian workers left in droves.

Makers of sheet metal components have been the worst hit. The manufacture of these involves heavy load lifting and transportation and most of the jobs at these companies were filled by migrants from Bihar and Uttar Pradesh.

“If the workers don’t come back, not just Tata Motors, but the entire manufacturing industry in Pune is in for trouble," the second vendor added. Pune’s construction industry, which has been growing at a furious pace, is going through a crisis with work on more than 50% of the projects almost at a standstill for more than two weeks now, disrupting financial planning and throwing development costs out of gear.

Auto component manufacturers in the industrial belt of Bhosari, Pimpri-Chinchwad and Chakan, who supply to Tata Motors, Bajaj Auto Ltd and Force Motors are now scrambling to hire workers. One Tata Motors vendor, for instance, has been going to the nearby villagers, recruiting temporary staff and training them to do jobs such as welding.