Mumbai: The market capitalization of state-owned firms may drop substantially following the new requirement to lift public shareholding in all listed firms to 25%, experts say.

Government-held firms that have been quoting at unrealistically high prices will likely decline once more shares become available to the public. 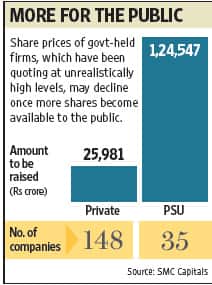 Such firms make up around 31.2% of the total market capitalization of the Bombay Stock Exchange (BSE).

S.P. Tulsian, a senior market analyst and an independent investment consultant, estimates that the share of government-owned firms in the market is likely to drop to 22-23% due to the stake dilution.

According to data from www.bsepsu.com, a website dedicated to government-owned listed firms, public sector units, or PSUs, had a collective market capitalization of Rs17.68 trillion as of 31 May.

In addition, 27 government-owned banks and their subsidiaries and six state public enterprises account for 6% of BSE’s total market capitalization.

Many of these firms are now trading at inflated prices because of minuscule public shareholding, experts say. For instance, the shares of MMTC Ltd, a metals and mining firm in which the government owns 99.33%, on Friday closed at Rs29,617 each.

This price is six times its “real value", based on conventional valuation parameters such as earnings multiple and book value, according to Tulsian.

“These shares don’t have effective price discovery. A company like MMTC whose shares are trading at Rs30,000 apiece does not have a realistic valuation in excess of Rs5,000," Tulsian said.

This means that when the government comes out with a follow-on public offer, or FPO, of the MMTC stock, the share price may decline to Rs5,000.

Similarly, Hindustan Copper Ltd, which is quoting at Rs500, has a real value of Rs300 per share.

“Of course, the value will come down," said S. Vishvanathan, managing director and chief executive officer of SBI Capital Markets Ltd. But it is difficult to estimate the extent of the decline.

Two out of three FPOs that took place in fiscal 2010 led to substantial market cap erosion.

For instance, the average market cap of iron ore producer NMDC Ltd, in the six months preceding the FPO in March, was Rs1.62 trillion. The company lost around one-third of its value after the offer. The market cap declined to Rs1.08 trillion on 4 June.

However, Rural Electrification Corp. Ltd, the third PSU that floated an FPO last year, has seen its market cap rise. The firm issued fresh shares along with a part of the government’s stake.

The government isn’t inclined to let market cap erosion stand in the way of its divestment plan.

He said the department will go ahead with the divestment plans chalked out earlier even as there are quite a few issues where clarity was required.

For instance, the new rules have been brought into effect from 4 June and companies have been asked to increase public holding by at least 5% per annum, but it is not clear whether the period refers to June-May or June-March, when the fiscal year ends.

“This is just a small part of the legal issues associated with the announcement, and we need to discuss all such issues with the department of economic affairs," Bose said.

According to an estimate by Delhi-based brokerage SMC Capitals Ltd, 35 government firms will sell shares worth Rs44,150 crore in the first instalment.

“If all public issues are sequenced and priced properly, the Indian market has the ability to absorb all these papers," said A. Murugappan, executive director at ICICI Securities Ltd.

As many as 148 private firms are also expected to bring down promoter holdings. These firms are expected to raise Rs17,177 crore in the first year, according to SMC.

Private companies will prefer to sell shares through qualified institutional placements, or QIPs, instead of public offers, Murugappan said, as it is a quicker divestment process and doesn’t require time-consuming regulatory filings.

QIPs, which involve the sale of securities to institutional buyers, were one of the preferred capital raising routes for Indian firms in 2009-10, with 65 companies raising Rs39,456 crore through this avenue.

While investment bankers are happy that the pipeline has expanded and more business is heading their way, some are concerned about the market’s ability to absorb this avalanche of paper.

“Whether the market can take so much is a question we need to answer," said Vishvanathan.

“Under volatile market conditions, pressure will be there. But market volatility is not a permanent phenomenon. So issues might sail through," said Nagendra Bhatnagar, head of IDBI Capital Markets Ltd.

“The valuation will be the key and the issuers and bankers should come up with proper valuation tools," he added.