Faridabad, Haryana: Shailendra Kumar counts himself lucky. An explosion and fire at his factory in May singed his legs and most of the skin off his arms. After five months, including one in hospital, he rejoined work on 18 September.

Two of his friends—Sid Bahadur and Narender Mehra—died in the fire at Lakhani India Ltd’s shoe factory in Faridabad, Haryana, out of a total 15 who perished in the 500- worker unit. At least 24, including Kumar, are still coping with burns of various degrees, and doctors have asked him to stay away from chemicals of any sort.

“I could walk out of the building on my own then. Many couldn’t, so they didn’t make it," says Kumar.

Lakhani India and its managing director P.D. Lakhani didn’t respond to queries at the time of going to press after phone calls were placed to him and the company. Questions sent by email elicited no response.

Lakhani’s three-storeyed building in Sector 22, reduced to its frame after the fire, is a mute witness to one of the curses of the Indian workplace—the lack of safety regulations and the government’s wilful ignorance of this non-compliance.

Kumar, a 25-year-old migrant from Bihar, was giving the finishing touches to the soles of rubber sandals in the basement of the building when a “ball of fire" exploded into the room through the door-less lift at about 5:45pm.

The explosion, blamed variously on gas cylinders kept in the sun and trapped inflammable dust, was like a clap of thunder that could be heard several miles away, according to one of the four inquiry reports accessed by Mint. At the factory, it caused the floors to buckle, glass to shatter and walls to collapse. Residents of Sanjay Colony, a working class neighbourhood close to the factory, say the sky glowed red past midnight as the fire raged for more than 12 hours. 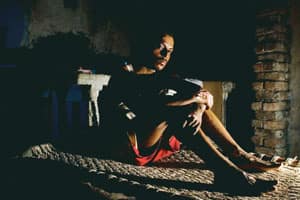 Lucky to be alive: Shailendra Kumar considers himself fortunate to have escaped with his life after the fire that left him scarred. Ramesh Pathania / Mint

In Haryana alone, 11 reported fires broke out in May and June, according to a state labour official who requested anonymity. They were largely on account of unsafe practices, many of which had been approved wrongly by labour officials, he said.

The inquiry reports seen by Mint indicate at least nine violations at the Lakhani unit, including the lack of proper storage for hazardous chemicals, the non-segregation of work areas and improper arrangements for throwing out accumulated inflammable dust. It has also been rebuked for not training staff about the chemical hazards involved in the shoe-making process.

In the three years Kumar has been employed at the company, no one warned him about the dangers posed by chemicals. He also received no training about the hazards of the inflammable dust that the adhesive used in the rubber slip-ons produced. No safety or fire drill had ever been held at the factory.

This pattern of violations is not restricted to Haryana. More than 99% of factory establishments do not conduct safety audits because they aren’t mandatory, says Suresh Kumar Srivastava, a retired government official who runs Safety Consultancy Services in Mumbai.

With experience gained during a career working in Uttar Pradesh, Rajasthan and Madhya Pradesh, Srivastava says only 1%, mostly big companies, file annual returns with the factory inspection departments, and many still don’t provide accurate data about production capacity or manpower.

Also See Where Lives Are At Stake (Graphics)

Factories usually contain more workers than can be accommodated. Chemicals are not stored well away from work areas and employees are rarely informed about the hazardous nature of these substances. “The basic data required to formulate a good safety policy is missing because companies do not provide the information," Srivastava says.

Factory lapses have earned India the dubious distinction of having the highest number of industrial accidents per 100,000 workers. In 2005, about 11 deaths occurred per 100,000 workers in India compared with two in the US and 0.01 in Japan, according to Laborsta, the labour statistics division of the International Labour Organization.

Experts doubt the figures on India, saying the numbers may be higher because the government survey covers less than 10% of factories and under-reporting is endemic in the system (see part 1 of Industrial Safety published on 5 October 2009).

The poor standards are also blamed on the eagerness to win investment as the economy opens up, according to Praveen Jha, labour economist at Jawaharlal Nehru University.

The neglect of labour laws “has prevailed all through Independence. But particularly during the reform period, whatever marginal system we had, we made it dysfunctional. Nobody gives a damn about workers’ protection", says Jha.

One of the immediate effects is that state governments have stopped investing in departments expected to administer factory regulations. Offices across the country are suffering from severe staff shortages as vacancies remain unfilled, says V.K. Sharma, a former chief inspector of factories in Delhi.

They are even starved of basic amenities, such as telephones, stationery and vehicles to carry out inspections, he said. In 2007, while he was still in service, he had five officers to inspect 7,500 units, about 1,500 inspections per officer a year, an impossible workload.

Then again, a majority of small manufacturing units are unregistered, escaping official scrutiny. According to the government, around 304,276 units are registered, but state administrations, which would be tasked with monitoring them, have appointed less than 700 safety officers.

Some states, such as Haryana, have begun to realize the perils of this shortfall and are seeking to redress the issue. Rajbir Dhariwal, chief factory inspector, said a self-certification drive has been launched to allow companies to voluntarily declare violations. The labour department will relax the duration of penalties in exchange, he said. Dhariwal’s initiative would depend on how willing companies are to making workplaces safer.

Non-compliance with safety norms is taking a toll, says P.K. Das, general secretary of the Steel Workers’ Federation of India, a trade union. “There is no overall standard for reporting accidents and, thus there is no question of prosecution for non-compliance," he said.

Violations are particularly acute in steel and mining companies that have mushroomed in the past few years on the back of the global commodities boom and domestic infrastructure growth, he said.

The Directorate General of Mines Safety (DGMS), which maintains accident data, puts out “fictitious reports", Das said derisively. “Workers who die after prolonged hospitalization are often not recorded. And the conditions are far worse in private mines, where there is no standard reporting system on safety and health," says Das, who was recently in Delhi to attend a seminar.

Utpal Saha, director of mines safety at DGMS, disagrees, saying many of these mines are in private hands and operate in the unorganized sector. They do not report when they open the mine and the starting date of operation, he said. “Since we do not have them on record, we cannot inspect them," Saha said.

Lack of accountability, partly due to overlapping legislation, has often clouded efforts to collect data.

Fed by export demand, about 30,000 iron-laden trucks make the journey from mines in western Orissa to ports hundreds of miles away, providing a ready-made alibi for employers, Das says. “Accidents happen and workers employed by the mine companies die, but they are reported as road accidents," he said.

Across states, large construction projects from housing to bridges and malls, operate without technical personnel who can test and pass cranes or scaffolding.

The Delhi Metro Railway Corp. Ltd, which has been expanding its network in the National Capital Region, has had accidents as it rushes to complete phase I of the project by the 2010 deadline and in time for the Commonwealth Games.

About 130 accidents have occurred during the 10 years of constructing the Metro, leaving at least 102 dead and 94 injured. Replying to a parliamentary question on 30 July, urban development minister S. Jaipal Reddy said an inquiry into two accidents in July, which left seven dead and 13 injured, found serious deficiencies in design and construction.

Delhi Metro rejected the contention that the accidents occurred because it was hurrying projects ahead of the 3-14 October 2010 Commonwealth Games.

“There is no connection between the accidents and the rush to meet deadlines. We have been taking maximum safety precautions and we record all accidents unlike most other projects that go unrecorded," said Anuj Dayal, spokesperson of Delhi Metro.

Last month, one of two half-built 100m chimneys collapsed at a power plant of Bharat Aluminium Co. Ltd (Balco) in Korba, Chhattisgarh, leaving 41 dead and five injured. According to an official of Sterlite Industries Ltd, which holds a 51% stake in Balco, the contract was being implemented by China’s Shandong Electric Power Construction Corp. and Gannon Dunkerley and Co. Ltd.

Who is ultimately responsible for such accidents remains murky as no one is ready to accept blame. But it also raises questions about the importance that administrations give to learning from such incidents.

After the Lakhani accident, Haryana’s labour commissioner Surina Rajan held an emergency meeting with officers at the local Magpie Hotel in Faridabad, and instituted an inquiry committee.

While reports were asked to be prepared, the panel did not meet to discuss possible leads. A separate judicial inquiry report, which Mint had access to, says the rubble in the factory was cleared 21 days after the fire, while its probe was still on. Finally, an official of the Directorate General, Factory Advice Service and Labour Institutes, a Central government organization, was flown in from Mumbai to investigate. He concluded that the company had “tried to hide" substances contained in a few drums on the site.

Kumar, a school drop-out who stopped farming his family plot in his village in the Ballia district of Bihar four years ago to look for a better life, doesn’t want to dwell on what happened in May. Still working at Lakhani, he has a philosophical attitude towards his escape from death. “It’s my fate," he says.