Chennai: To hear K. Pazhaniappan tell it, rarely has a new mode of communication wreaked such dire punishment upon an older one. “Cell-phone towers!" he says, with a hint of gnashed teeth. “They’re everywhere now, and they throw our pigeons off track." 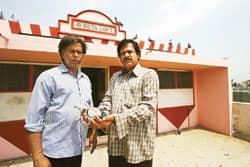 Chennai is the Indian nucleus of pigeon racing, home to more than 200 fanciers and six distinct clubs; in second rank is Kolkata, with fewer than 100 fanciers. Here, it isn’t so much Tennyson’s “the moan of doves in immemorial elms" as the gurgling of pigeons from backyard cages or terrace lofts. But like all Indian cities, much to Pazhaniappan’s chagrin, Chennai is also rife with cell-phone towers.

NMRPA’s members aren’t the first to complain. A pigeon’s navigational ability is thought to depend on the earth’s magnetic field, and a study by the Swiss Bird Study Organisation has discovered that a cellphone tower’s electromagnetic emissions tend to confuse the birds. In Britain, a group of pigeon fanciers in Durham attempted to stop the construction of a new Orange cellphone tower on the same grounds.

One friend, Pazhaniappan remembers, released 20-odd young birds from his terrace soon after a tower sprouted near his house. “Every one of them vanished. Only his next batch of young birds, which grew up getting used to the tower’s signals, could navigate around it."

The pigeon-racing passion is a relic of the British Raj. “The British used to be active breeders of tumbler birds—pigeons that would just hover around your house endlessly and then settle back into their coops," says Pazhaniappan. “Then the British left, but their birds stayed."

Noel Kannan, a retired physician with 250 birds in his beach-house backyard, points out that Mumbai and New Delhi rapidly became too crowded to raise birds. “There are a couple of clubs in Bangalore and Kolkata still," he says. “But the sport has a longer history in Chennai, and somehow it has grown in popularity, not declined."

Racing these pigeons is considerably more complex than having them simply circle a house. The birds are first trained painstakingly; pigeon fanciers release groups of young pigeons first at a distance of 10km, then 20km and gradually extend the range past 400km.

“But because of these towers, or predator hawks, or pesticide-tainted water, some birds never return, even from 10km away," says Suresh Kumar, an owner of 60 pigeons. Out of 100 birds released from 100km away, he estimates, a fancier could lose as many as 40; from 1,000km away, on average, only one in 10 returns.

The pigeon-racing season in India runs from January to April, before the acute summer heat sets in. Little expeditions of pigeon fanciers set out in vans or on trains, carrying medical certificates and police clearances and forestry permits, and their birds in flat steel boxes.

Once in Bhopal, or Nagpur or New Delhi or anywhere else, the pigeons are released early in the morning. At their fastest, they fly 900m a minute— 54kmph, roughly the speed of a cruising car. Around the time they are expected back in Chennai, the fanciers will wait in each other’s houses to record the time of arrival.

“There are no great prizes for winning these races, just what the clubs manage to put up," says S. Manohar, treasurer of the NMRPA. R. Eswaran, the secretary of the Tamil Nadu Homing Pigeon Racing Association, adds: “In fact, we even hesitate to call it ‘racing’, because we don’t want people to think we’re gambling on the results."

Pazhaniappan’s 150 pigeons reside in a matrix of orange-and-cream chicken-wire cages, called the Beta Loft, on the terrace of the Beta Matriculation School, which he started. Even the school’s symbol is a pigeon, garbed by the words “Peace, Love, Wisdom." “That is what the birds signify to me," he says.

To extract one of his pigeons, Pazhaniappan steps inside his loft, softly cooing, “Ok, ok, ok" to calm his birds down. His selected specimen, like the rest, is prosperous, shiny and plump. On one leg, a printed band reads “Beta Loft"; the other leg’s band gives the NMRPA number and year of birth of the pigeon.

“For a loft of 100 birds, we spend around Rs2,000 every month, on feed, medicines, vitamin and mineral supplements," says Pazhaniappan. His pigeons are fed mostly from mixtures of corn, ragi, maize and peas, stored in huge Asian Paints cans in his stairwell.

Over the last few years, as avian flu scares restricted the import of birds, pigeon fanciers have struggled to bring in robust pigeons from abroad. One gentleman in south India still smuggles the occasional bird in from Australia; another secretes eggs in imported jars of condiments.

“But most of us have had to learn to breed pigeons from scratch," says Kumar. “We learnt to track parentage, examine the tail and keel of a bird. Everybody has their own ideas, but there are some fundamentals, some basics."

For Kumar, a bird’s eyesight is the most important quality. “The inner muscle inside the pupil shows long-distance capacity." The iris—he pronounces it “Irish"—“shows stamina. It’s all highly scientific." But then, he adds a little sheepishly, “These are theories. After all, we can’t speak to the bird. There may be some practical problem that we may never know about."

Almost invariably, these fanciers come to love the birds more than the sport. Kannan stayed in a job in Saudi Arabia for 20 years because he couldn’t bear to leave his pigeons. P. Krishnaraj, who rears 50 birds, spends two hours with them every day: “Just sitting among them, that’s all."

Most of these fanciers were sucked into the hobby in their early teens. “Usually, it’s passed on as a sort of family tradition," says Pazhaniappan. Krishnaraj’s grandfather raced pigeons; so did Manohar’s uncles. “I must be an exception," Pazhaniappan says. “But really, this is like a cancer. Once it gets into your blood, you can’t get it out."

When his new house was under construction for a year, Manohar had to lodge his birds elsewhere. “I missed them so much that I would come to Pazhaniappan’s house every evening," he says. “Only then could I sleep at nights."

On Manohar’s mantelpiece rest pictures of his wife and children, as in every house. But the biggest, least dusty photo is of Night Flyer, his Nagpur-Chennai race winner. “I’ve lent him to a friend now, to breed," he says. “But I’ll have him back soon."