New Delhi/Bengaluru: Job websites saw an increase in the number of resumés being posted by software engineers between January and April, highlighting the uncertainty surrounding the fate of thousands of employees at large Indian IT firms.

Naukri.com reported a 27% jump from the year-ago period in job applicants from the IT industry in the January-April period; iimjobs.com, a 12.4% increase; and CareerBuilder.com, a 11.5% rise, according to data shared with Mint by each of these portals. Monster.com saw a 60-65% year-on-year increase in the number of software engineers posting resumés in the last month alone.

All four job portals declined to share the absolute increase in resumés and rather shared only the percentage increase. 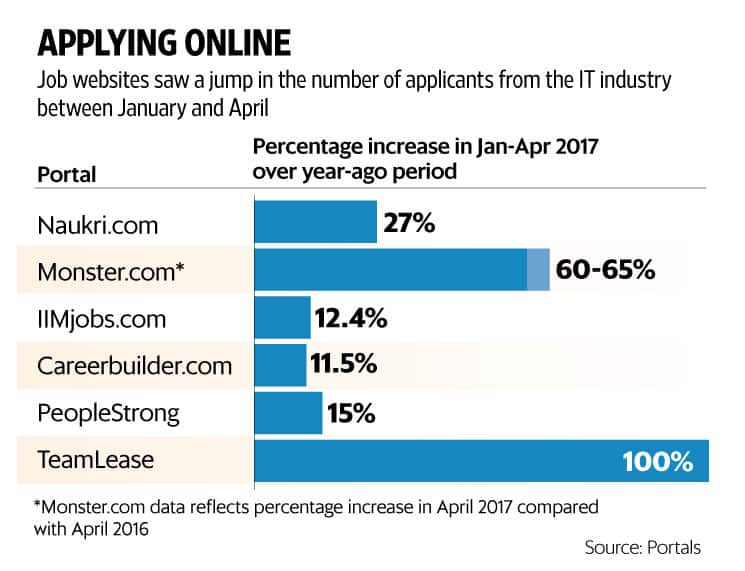 IT companies are in the midst of the industry’s largest retrenchment drive, with seven of the biggest companies planning to let go twice the number of employees asked to leave last year, or at least 56,000 engineers in the current year. Some executives say that many of these companies, including Infosys Ltd, Wipro Ltd and Cognizant Technology Solutions Corp., are likely to end the year with fewer employees than they started with, despite continuing to hire young engineers.

ALSO READ: Indian IT and the lightning bolt of layoffs

The Indian IT industry, which does business of $150 billion a year, employed 3.9 million people at the end of March 2017, according to industry lobby group Nasscom, which has denied reports of layoffs.

To be sure, not all people registering on job portals are likely to have lost their jobs.

“This increase can be attributed to the uncertainty that clouds their future with regards to the continuity of the current job role, given the transformation that their organisations are going through," said Rituparna Chakraborty, co-founder and executive vice-president at TeamLease, a staffing firm, which saw job applicants from the IT sector double in January-April period.

Most job applicants register at more than one job portal. Software industry executives say 50-75% of engineers with a few years of experience use job portals. A third of job seekers use referrals, while executive search firms help companies fill positions at senior levels.

Another staffing firm, PeopleStrong HR Services Pvt. Ltd, saw a 15% increase in applications from mid-to-senior level executives from IT companies in the January-April period.

The numbers do indicate some level of anxiety in the minds of employees but they are not alarming, said Tarun Matta, founder of iimjobs.com. “I read the McKinsey report stating how a third of workforce will be irrelevant in the next three-four years, and so I assumed the numbers would be very high."

Technology outsourcing companies are re-looking at their existing workforce as they face a structural challenge (and not just a cyclical change as witnessed in the past) on account of newer technologies such as cloud computing, which has forced these firms to move from a people-led model to a platform-driven approach. At the same time, more companies have embraced automation tools to perform the mundane, repeatable tasks that were performed by an army of engineers earlier. Finally, poor growth and pressure on profitability have prompted most companies to save on costs. In the year ended March 2017, for the first time since 2009-10, Tata Consultancy Services Ltd, Infosys and Wipro grew slower than industry body Nasscom’s 8.6% growth forecast in constant currency terms, even as profitability of all the companies declined.

“The change we are witnessing in the IT Services industry is structural—these are challenging times as industry is reinventing its business model," said Venkat Shastry, partner at executive search firm Heidrick & Struggles. “We will see people leaving companies in a staggered way over the next 3-4 years as the sector will continue to shed jobs. Unless a new sunrise sector like the IT sector, which was born decades back, or the e-commerce sector, which emerged a few years back, comes up and absorbs these people, it will be a painful journey."