It lists the government’s ease of doing business initiatives, progress in unclogging stalled projects, liberalization of foreign direct investment rules, government employees’ pay revision and good monsoons that will boost consumption as “factors that may help in turning around the investment outlook in the near future". 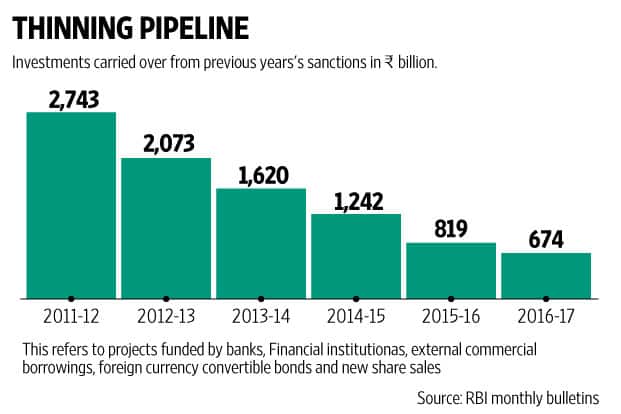 “Improvement in the performance of the corporate sector including its leverage gives reason to be optimistic for the year ahead," it said, referring to the RBI’s June Financial Stability Report.

The key to this reviving capital expenditure, however, will be new investment intentions that companies announce this year.

Since total capital spending by this set of companies amounted to Rs1.5 trillion in 2015-16, Rs83,800 crore will have to come from new investment intentions this fiscal year to maintain the level of aggregate capital expenditure.

The pipeline of existing sanctions has come down simply because fewer projects were kicked off in the preceding years. A number of projects are also stalled, abandoned or scaled downwards because of the economic slowdown.

In the June quarter, gross fixed capital formation, which is used as a proxy for investment demand in the economy, shrunk 3.1% compared to a dip of 1.9% during the March quarter, signalling no pick-up in private investment activity in the economy. Now, as business confidence improves gradually prompted by factors listed by the RBI, more companies may spend money on building new factories.

In the March quarter, the latest for which data is available, capacity utilization was 74.1%, similar to the levels of a year ago. The June quarter earnings of listed companies also don’t offer any confidence on a significant pick-up in capacity utilization.

Also Read: Milking RBI out of its autonomy, rupee by rupee

RBI’s study has one big caveat. It relates only to those projects which are funded through banks, financial institutions, external commercial borrowings, foreign currency convertible bonds and new share sales.