Indian IT jobs decline in first half of FY18

Bengaluru: The Indian IT industry is no longer creating jobs.

Six of the largest employers in the $154 billion Indian information technology (IT) industry saw their workforce shrink in the first half of the current financial year, for the first time since the industry put India on the global software services map.

Worryingly, this development now puts a question on the estimate of the lobby group National Association of Software and Services Companies (Nasscom), which at the start of the current fiscal had projected the industry to see a net increase of at least 150,000 people.

India’s five largest companies—Tata Consultancy Services Ltd (TCS), Infosys Ltd, Wipro Ltd, HCL Technologies Ltd and Tech Mahindra Ltd, and Nasdaq-listed Cognizant Technology Solutions Corp.—together employed 1,243,777 people at the end of the September quarter, down from 1,247,934 people at the end of March, translating to a net reduction of 4,157 people. These six companies, which together employed more than a fourth of the 3.9 million people working in the industry, added 59,940 people in the first half of 2016-17. 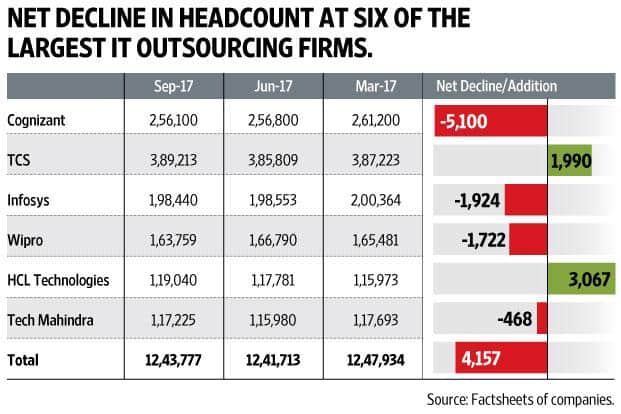 Four of these companies—Cognizant, Infosys, Wipro and Tech Mahindra—saw their workforce decline while TCS and HCL saw a marginal increase in the April-September.

At the heart of the issue of IT firms finding it difficult to increase their workforce is the fundamental change in the business model that Indian IT companies are wrestling with. As IT companies start working on newer technologies such as cloud computing, they are fast moving away from a people-led model, which means they need fewer employees. Meanwhile, many of the IT companies have embraced automation tools to perform the mundane, repeated tasks that were performed by an army of engineers earlier. Finally, US President Donald Trump’s protectionist policies have forced most firms to re-look at their current workforce.

During the first quarter of 2017-18, the country’s 10 largest IT firms added 205 employees in April-June period to take their total workforce to over 1 million employees at the end of June 2017.

“What required 50 programmers, analysts or accountants five years ago can be done by a handful of smart thinkers and much smarter systems," said Phil Fersht, CEO of US-based HfS Research, an outsourcing research firm.

In May, Mint first reported that the largest IT firms are already in the midst of the industry’s largest retrenchment drive, with seven of the biggest IT firms planning to ask at least 56,000 engineers to leave this year. The number is at least twice the employees laid off by the companies last year.