Home >Industry >Want to map your hometown? Throw a party

Want to map your hometown? Throw a party

Want to map your hometown? Throw a party

Bangalore: Two months back, when D. Alagesa Pandian decided he wanted to map his hometown, Hosur, some 40km from Bangalore, he started organizing a party around it. Pandian sent a party invite on the OpenStreetMap mailing network and six people turned up. 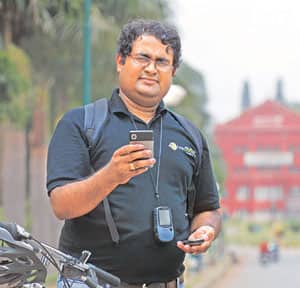 Mapping network: OpenStreetMap member B.V. Pradeep says he maps for fun and because he wants to contribute towards society. Hemant Mishra / Mint

The group split into three and biked their way through the congested town armed with global positioning systems (GPS), pen and paper. They helped put faces to email addresses and even introduced two Hosur localities into the movement.

“What is important is mapping the skeleton of the city like the arterial roads, major landmarks, temples and shopping areas," says Pandian, who treated the bunch to a sumptuous meal prepared by his wife at his house in Hosur.

After an afternoon siesta, the bunch set out again, this time on foot, to map Manjusree Nagar, where Pandian resides. That over, they collated all the gathered data and uploaded it on to the digital world.

“I made a couple of friends that day," says the 34-year-old Pandian, a doctor of botany who had joined the mapping network just a month earlier. “I hope to meet them and some new people at the next party in August."

Steve Coast, a software entrepreneur currently based in San Francisco, founded OpenStreetMap, or OSM, in the UK in April 2006 to create free, digital maps. The not-for-profit foundation uses the crowdsourcing model, on the lines of online encyclopedia Wikipedia, urging global communities to translate satellite images into roads dotted with bus stops, offices and footpaths. It has 130,000 registered users globally.

There are no formal editors for OSM but at least 2% of the users act as reviewers, says Arun Ganesh, 21, an engineering graduate who aggressively mapped parts of Chennai in three-four months on to OSM. “As (the) number of users grow, number of edits also go up and increase veracity."

India boasts of hundreds of users today, with active mappers spread across Mumbai, Chennai, Bangalore, Kolkata and even Ludhiana. Just a year-and-a-half earlier, there was nil activity on OSM from India.

Culturally, Indians don’t have a habit of using maps but this is slowly changing, especially among the younger people in technology companies.

“Whenever there is some planning involved, I see people using maps but not when they are stuck in a traffic jam," says Pandian of his friends and peers. Pandian himself runs a technology company, Bangalore-based Mapunity Information Services Pvt. Ltd.

Indian mappers, mostly male and tech-savvy, are also catching up with mapping parties, a concept popular in Germany and the UK.

These are free, open-to-all events such as the one in Hosur, where people get together with global positioning devices to map streets, by-lanes, government buildings, parks and the like, laced with food, drinks and merry-making.

On 1 August, Kolkata had a mapping party in Jadavpur, a residential locality and home to an eponymous university in the south of the city.

Bangalore, which has played host to a couple of mapping parties in recent months, will have two more in August—on 9 August in Electronic City, an eastern suburb chock-a-block with technology companies, and another in the latter half of the month in Koramangala, a favourite residential address among tech workers.

Members say they have seen OSM swell in India thanks to free map workshops, increasing awareness and the falling price of GPS-enabled cellphones, an essential tool for map making.

These high-end phones, which can locate the longitude and latitude of the user, used to cost as much as Rs20,000 in 2007. That price tag’s down by half now.

Pretty much every country on the globe has someone active in OSM, says San Francisco-based Mikel Maron, board member of OpenStreetMap Foundation. “It’s always surprising to find out someone from the other side of the globe working passionately on the same project you are."

“The very big advantage is the high level of localized knowledge. You know the things around your house like nobody else." Moreover, says Prasad, “these maps are free to use and not the proprietary data of (say) Google."

He was referring to Google Inc.’s Map Maker service, launched in August in India to tap into community knowledge to enhance Google Maps. Though large parts of it are contributed by the community, Google’s map data is the intellectual property of Google, while OSM operates under a creative commons licence, allowing for freer copyrights.

The extent of localization and cultural aspects is much more in OSM than in Google Maps, says T.B. Dinesh, 48, who plans to track shepherd trails across Karnataka, Tamil Nadu, Andhra Pradesh and Maharashtra in the coming months, and mark the route on OSM.

His company, where he is a technical director, is looking to document the nomadic paths as part of a research project.

Standing in Bangalore’s lung, Cubbon Park, he says, “For instance, if one were to map this park in a regular map, one would just mark the main roads through it. But OSM maps aim to indicate walking paths as well."

Last week Pradeep, also a cycling enthusiast, biked through Sarjapur, a suburb in eastern Bangalore with a fast-changing skyline of multi-storeyed, residential apartments, marking the latitude and longitude coordinates of the most permanent landmarks in descending order—government buildings, followed by schools, places of worship, apartment blocks and, finally, malls.

“I map for fun and because I want to contribute towards society," says Pradeep, an electronics engineer with Mapunity Information Services. He is one of the local contacts for OSM in India.

Others hope to build and monetize. Subhodip Biswas, 23, a computer science engineer and another contact for OSM in India, is working on the code to build an OSM-based application for micro-blogging site Twitter.

“The application will indicate the latitude and longitude of the person who tweets," says Biswas, who evangelizes the cause at engineering colleges.