Mumbai: Banks are using a 15-day period after a Reserve Bank of India (RBI) deadline to finalize debt resolution plans for stressed companies ended on 27 August to obtain final approvals for 12 NPA accounts that are close to being resolved outside bankruptcy courts, a move some experts say will be rejected by the banking regulator. Banks have interpreted RBI’s 15-day window to refer NPA accounts to the National Company Law Tribunal (NCLT) as a grace period, three people aware of the development said.

In a 12 February circular, the central bank asked lenders to find resolution plans for stressed loan accounts of ₹ 2,000 crore and above within 180 days of 1 March. 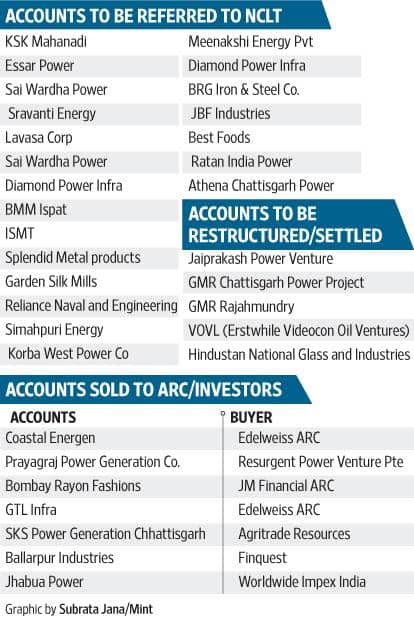 Going by the RBI circular, banks are supposed to start referring unresolved loans, no matter what stage of resolution they are at, to NCLT within 15 days from the end of the 180-day period.

According to one of the three people cited before, although most resolution plans have been approved by the consortium, a few documents need to be signed and that will happen in the next 15 days. “In some cases, even the investor or the buyer has to obtain certain approvals and therefore we hope to wrap it up in the next few days," the person said, adding that in all viable cases, rating agencies have completed evaluation of the outstanding loans.

The second person said bank chiefs, at a meeting on Monday, had broadly agreed on the accounts to be sent to the bankruptcy court. “We have agreed that whatever last-mile approvals are required will be taken in the next 15 days," the person said.

According to the 12 February RBI circular, a debt resolution plan shall be implemented only if the borrower is no longer in default with any of the lenders. If the resolution involves restructuring, all related documentation, including execution of necessary agreements between lenders and borrower, creation of security charge are to be completed by all lenders.

However, some believe the central bank might not relent and seek strict adherence to the circular. “The circular is quite clear in saying that if resolution is not complete within 180 days, the account will have to be referred to the NCLT," said Siby Antony, executive chairman of Edelweiss Asset Reconstruction Co.

According to the second banker cited before, the central bank has been a stickler for deadlines in the past and had rejected lenders’ decision to recast loans of BILT Graphic Paper—despite more than 80% lenders agreeing to it— as it had overshot the deadline. BILT Graphic Paper was part of the 28 accounts RBI had asked lenders to find resolution plans for by 31 December last year.

ALSO READ | With no relief by the court, banks are back to the provisioning grind

Issues such as using the next 15 days as grace period would depend on the reading of the circular and its fine print, said Karthik Srinivasan, group head of financial sector ratings at Icra. “The effect of these resolutions and NCLT referrals will be reflected in the September quarter results of banks and the 15 days would not change much," he said.

Mint reported on 28 August that lenders had decided to refer 20 of at least 32 NPA accounts to the NCLT, as directed by RBI in the 12 February circular. Among these 20 accounts , a majority—including Essar Power, Korba West Power Co. Ltd, Jindal India Thermal Ltd and Sravanti Energy Pvt. Ltd—are power firms. The list has metal firms, including BMM Ispat Ltd, ISMT Ltd, BRG Iron and Steel and Splendid Metal Products Ltd. Reliance Naval is also among the firms to be referred to bankruptcy courts.