Will automation mean that all the jobs vanish? In the case of the office-tech revolution, even combined with a large expansion in the number of people wanting to work, it did not

I am often asked to opine about whether automation will destroy all jobs. Yes, we talk about tractors, which brought farm employment from something like 70% in the US at the beginning of the 20th century to about 3% today... about cars, which put horse drivers out of business. And about trains, which put the canal boats out of business.

A more recent case has occurred to me, however. In the 1950s and 1960s offices used to have typing pools in basketball-court-sized rooms, staffed almost exclusively by women.

Then along came the copier, the fax machine, the word processor, the PC. And that’s just typing. Accounting involved similar ranks of women with adding machines. Women by the roomful used to operate telephone switchboards, now all automated.

If you were prognosticating in or around 1970, and someone asked, “What will happen now that women want to join the workforce, but office automation is going to destroy all their jobs?" it would be a pretty gloomy forecast. But here’s what actually happened: the female labour force rose from 20 million to 75 million. The female participation rate rose from below 35% to 60%. Women’s wages relative to men’s rose as female workers moved into activities with higher productivity than retyping the same memo a hundred times. Businesses expanded. And no, 55 million men were not out on the streets begging for spare change. 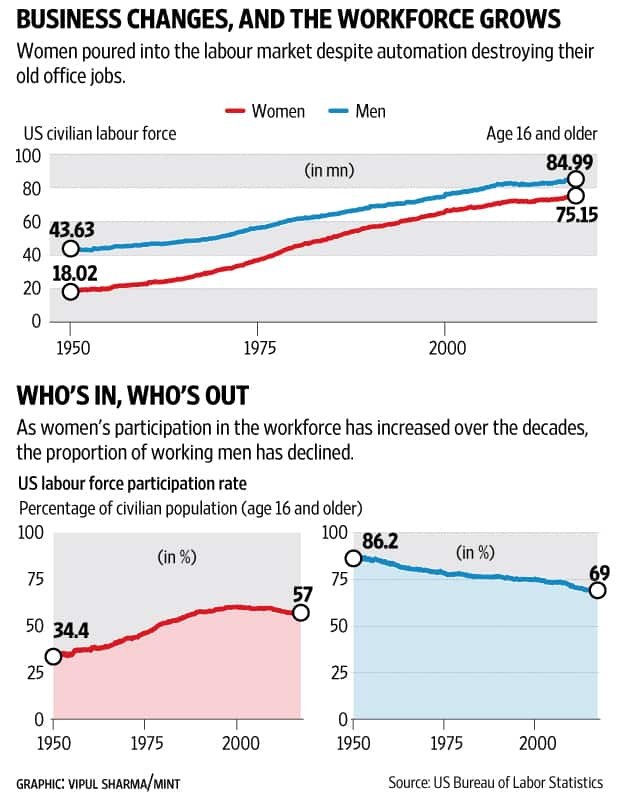 But even if women were moving in and men moving out of employment, it would just show that you can’t make predictions simply by looking at who has what jobs now that are threatened by automation. The typing pool got better jobs.

This is all a simplification, of course. There were surely some people with specific skills—shorthand, for eg.—who couldn’t retrain and do as well as others. There are real problems with the labour market and real concerns for American workers.

But will automation mean that all the jobs vanish? In the case of the office-tech revolution, even combined with a large expansion in the number of people wanting to work, it did not.

John H. Cochrane is a senior fellow of the Hoover Institution at Stanford University and distinguished senior fellow at Chicago Booth. This essay is adapted from a post on his blog, The Grumpy Economist.