EY study shows 70% of Indian respondents will take to unethical means to achieve targets, as against 36% globally

Mumbai: How far will senior executives at a company go to meet its financial goals?

Too far, but most shockingly, more top executives in India than any other nation are ready to cross the line into unethical territory to boost performance, found a global study by consulting firm EY.

In fact, Indian executives came on top on every single unethical act that could be adopted to meet targets. 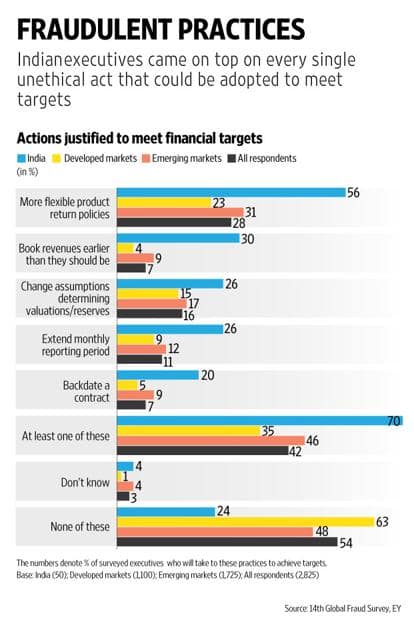 “This is very serious. This shows that Indian companies are more malleable when it comes to bending the rules to improve performance," said Mukul Shrivastava, partner, fraud investigation and dispute services, at EY.

Despite the increased crackdown by regulators on everything from insider trading to securities fraud, and the push for ethical conduct and better corporate governance in companies, the study shows that many senior executives across the globe are comfortable with committing fraud to boost their companies’ financial performance, the survey showed.

About 26% of executives in India said they would extend the monthly reporting period if that will improve the company’s performance. That compares with 12% of respondents in other emerging markets and 11% globally on that metric. 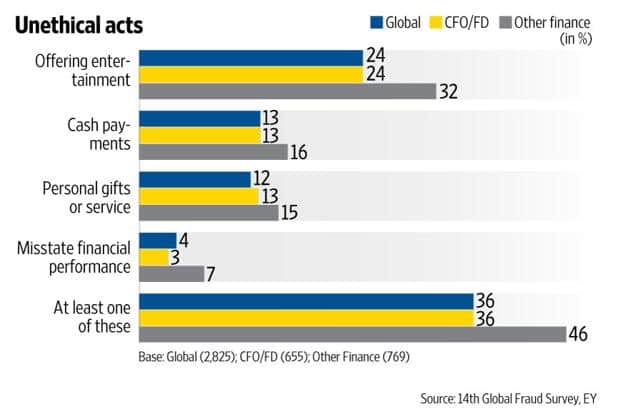 Subbarao Amarthaluru, group chief financial officer of RPG Enterprises Ltd, who has been in the Indian corporate world for over three decades, looks at it differently.

“In most of the companies in India, this is not seen as unethical but a way of doing business. And if you don’t do this, you wont survive," he said.

One of the reasons for this kind of possible misconduct could be the fact that the variable pay of top officials is linked to the performance of these executives. As much as 35% to 50% of their salary is based on the company’s performance.

“Executives like CFO, CMO (chief marketing officer) are all business partners, and they are collectively responsible for margins and growth. So to fulfil their targets, they could tend to resort to unethical behaviour," said EY’s Shrivastava.

One of the other reasons for the prevalence of fraud is the unwillingness of Indians to blow the whistle on wrongdoings.

The Companies Act mandates firms to have a vigilance mechanism and many companies have set up various types of whistle-blowing mechanisms.

About 30% of those surveyed in India said they were loyal to the company and did not want to call out on fraud that could taint the company’s image. This is much higher than the global average of 19%.

“This is more of a culture issue. In India, the issue of corporate governance is only about five years old. With more training and awareness, the attitude towards whistleblowing will change," said Shrivastava.

So how effective is the Companies Act rules when it comes to curbing these wrongdoings?

“The audit committee meetings and independent directors will not be privy to these actions. If real change has to happen, all stakeholders need to be vigilant," said Amarthaluru.

Firms need to also become more proactive in applying anti-corruption compliance programmes, undertake appropriate due diligence on third parties with which they do business and encourage and support whistleblowers to come forward with confidence, said the EY report.

“Above all, with an increasing focus on the accountability of the individual, company leadership needs to set the right tone from the top," the report said. “It is only by taking such steps that boards will be able to mitigate the impact should the worst happen."