Thanks for Visiting Mint
You seem to have an Ad Blocker on. Please turn it off in order to continue, or whitelist Mint
HOW TO TURN OFF AD BLOCKER
OR
REFRESH IF YOU ALREADY TURNED OFF THE AD BLOCKER
Home >Industry >Manufacturing >Motorcycle sales rise 19% in April on rural recovery

New Delhi: Sales of motorcycles grew at the slowest pace in six months but still maintained a healthy double-digit growth as India’s rural markets continued to recover from disruptions such as demonetization and implementation of the goods and services tax.

Motorcycle sales grew 19.4% to 1.2 million units from a year earlier, the slowest since November when it had grown at 23.3%, according to data provided by Society of Indian Automobile Manufacturers or Siam.

The pace of growth augurs well for companies such as Hero MotoCorp. Ltd and Bajaj Auto Ltd who saw an erosion in their market share as sales took a hit due to a prolonged slump in demand in rural areas, where customers prefer motorcycles over popular gearless scooters in urban India.

Analysts said that heightened infrastructure activity and the prospects of another good monsoon would spike economic activity and demand from rural markets. 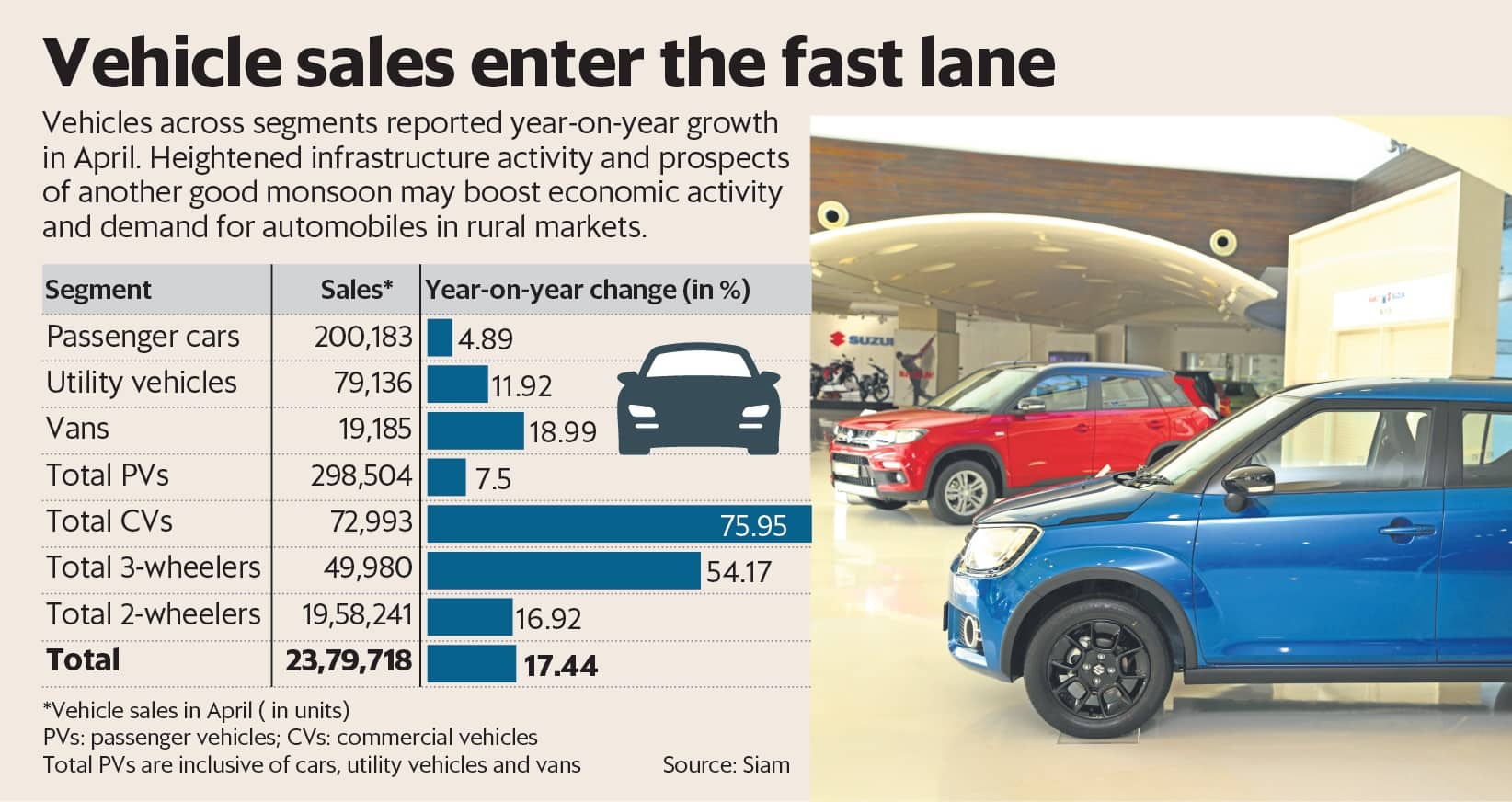 “The sale this month in two wheelers is the second highest over the last 36 months, close to breaching the 2 million mark which has happened only once in September 2017," said Sridhar V., partner, Grant Thornton.

Rabi crop has been good and there is reasonable cash in the hands of farmers, said Binaifer Jehani, director, Crisil Research, said.

“It is also important to note that last year in March (2017), the country migrated to BSIV and two-wheeler manufacturers shelled out discounts to the tune of 20-25% to liquidate stock in March 2017 and were in stock out position. This also gave room for better sales in April 2017 unlike commercial vehicles which faced supply-side challenges," Jehani said.

Sales of commercial vehicles also rose 76% to 72,993 units largely due to a low base caused by a substantial fall in production of vehicles as the industry had to move to BS-IV norms from BS-III norms from 1 April 2017.

Yet, top commercial vehicle makers such as Tata Motors Ltd, Ashok Leyland Ltd and Volvo Eicher Commercial Vehicles (VECV) are bullish about the demand for the next two years due to the union government’s unflinching focus on building infrastructure. As works under projects like Sagarmala, Bharatmala and Smart Cities programme gain pace and activity in the mining space also increases demand for heavy trucks and tippers will continue to sustain at the current level.

“Public spending too has aided demand. On the light commercial vehicle side, replacement demand has been healthy and continued support from private consumption has kept the demand momentum strong," Jehani added.

Strict implementation of the overloading rules in some of the northern states will also contribute to the overall growth of the heavy commercial vehicle segment.

After implementation of the GST, cost of operating a 35 tonne truck is approximately 35% lower vis-a-vis a 16 tonne truck—when compared on cost/per tonne/per km basis, according to a research note published by ratings firm Icra.