Since September 2016, Reliance Jio Infocomm Ltd has been laying the markers for the telecom sector. In 2016, it disrupted the sector by launching its telecom operations and offering free trial services on scale. In 2017, it started reorienting to commercial market dynamics while clinging to remnants of freebies and price offers. In 2018 too, Reliance Jio is expected to set the markers with its decision on where it sets the balance for itself—and, by extension, for others—between an unabashed chase for subscribers and the practical pursuit of profitability. …or pursuit of profitability

Between them, the top four telecom firms—Airtel, Vodafone India Ltd, Idea Cellular Ltd and Reliance Jio—control 67% of all subscribers. Even as merger and acquisition activity, or attrition, intensifies in the remaining 33%, the pivotal question for the industry is: will Reliance Jio be content with substantial pickings from this one-third or will it go hard on the two-thirds above it? Reliance Jio’s entry has seen revenues of the top players stagnate and profitability plunge. And if Reliance Jio stays aggressive in 2018—it has the deep pockets to do so—it will strain the financials of all players, including Jio, even more. 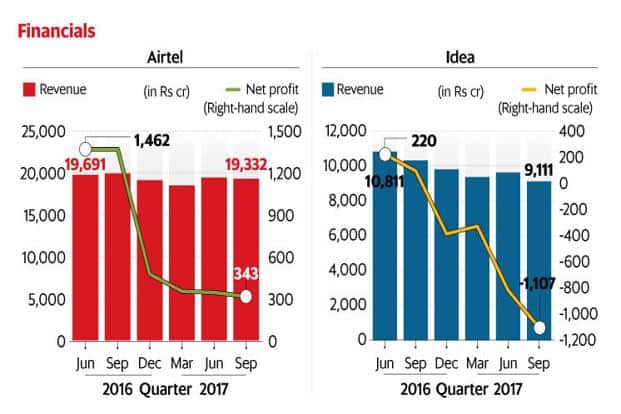