Siam data shows sales of passenger vehicles in India rose 14.68% in April from a year earlier, largely on the back of demand for compact cars

New Delhi: Sales of passenger vehicles in India rose 14.68% in April from a year earlier, largely on the back of demand for compact cars, according to data released by industry lobby group Society of Indian Automobile Manufacturers (Siam) on Tuesday.

The trend is likely to continue through the fiscal year 2017-18, analysts said, due to pent-up demand for vehicles with the impact of demonetization wearing off. 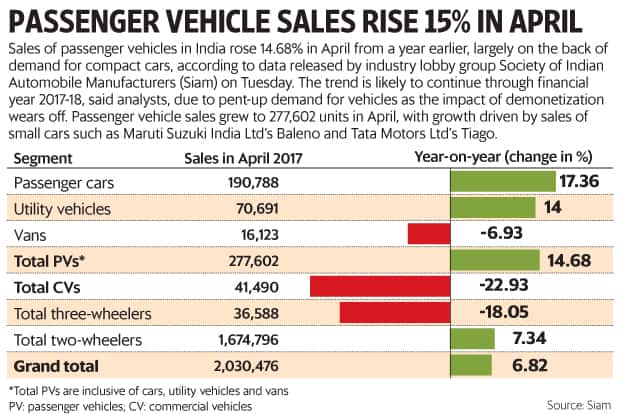 “April 2017 is a good start for the Indian automotive industry. Many OEMs (original equipment manufacturers) with a good product line have registered significant growth in April 2017. The pent-up demand is driving the vehicle sales and the impact of demonetization is wearing off," said Abdul Majeed, partner and national auto practice leader at PricewaterhouseCoopers.

Majeed said the current fiscal year looks promising for the automotive industry, largely due to overall growth in the Indian economy.

The temporary disruptions (primarily to private consumption) caused by cash shortages accompanying the currency exchange initiative are expected to gradually dissipate in 2017 as cash shortages ease, the International Monetary Fund (IMF) said in its regional economic outlook on Tuesday.

It said India’s growth is expected to rebound to 7.2% in FY18 and 7.7% in FY19, and recommended the removal of structural bottlenecks to enhance market efficiency. India’s economy grew at a healthy 7% in the December quarter.

For the auto sector, Majeed said, there are challenges such as smooth implementation of goods and services tax (GST) and the monsoon that would influence the generation of demand in the rural economy.

Siam issued a conservative forecast for the year ahead, and said it expects sales growth in the range of 7-9% as it sees cost of ownership increasing to 6% during the year on rising raw material and fuel costs. It also expects fewer SUVs to be launched during the year.

On Tuesday, Siam also stuck to its forecast for passenger vehicles, sales of which are expected to grow in the range of 10-12%.

Sales of motorcycles continued to be subdued—a matter of concern for market leader Hero MotoCorp Ltd—while those of scooters returned to a healthy pace of growth after a month, which is promising for Honda Motorcycle & Scooters India.

Motorcycle sales were flat at 1 million units while sales of scooters grew 25.30% to 5.86 lakh units. In motorcycles, Hero has a strong presence while Honda is a leader in the scooter segment, which has helped it bridge the gap with the market leader at a rapid pace.

“In the two-wheelers segment, scooters are doing pretty well. In fact, even in rural areas, people are increasingly going in for scooters," said Sugato Sen, director general, Siam.

Sales in the commercial vehicle segment, which is often considered to be an indicator of economic activity in the country, declined 22.93% to 41,490 units. Sales of heavy trucks and buses declined 55% to 10,602 units.

PTI contributed to this report.