Is digital just a buzzword for Indian IT companies?

Are Indian IT firms really engaged in what they term 'high-end' or 'transformational' work for their clients?

Bengaluru: Companies love buzzwords. Smac or Smaci is the one that has been in vogue in the Indian IT services business for a few years now. It stands for social, mobile, analytics, cloud and Internet of Things. India’s IT services firms Tata Consultancy Services Ltd (TCS), Infosys Ltd and Wipro Ltd say that as clients embrace all things digital, the proportion of Smac-related work is increasing.

This is the kind of detail that analysts want to hear. After all, Smac work is expected to be more profitable than the traditional work done by these firms. It is also non-linear—which means growth in revenue is not linked to growth in the number of employees.

Yet, for most Indian IT services firms, revenue per employee in the digital space is almost the same as that in their traditional lines. Analysts say that begs the question: Are these firms really engaged in what they term “high-end" or “transformational" work for their clients?

“You can do the math (on how many people are in the digital business). The revenue-employee delineation has not happened until now," Ajoy Mukherjee, TCS’ HR head, said in an interview last week. “We have said $2 billion from digital. So we have over $15 billion (in revenue) and 320,000 people," said Mukherjee.

This suggests that India’s largest IT company, TCS, has about 41,000 engineers, offering its clients solutions such as cloud computing or making sense of large sets of unstructured data sets. Revenue per employee for TCS stood at $48,500 even as revenue per employee from the digital practice was $48,780 in FY15.

The trend is similar for Infosys and Wipro (see chart).

That’s in stark contrast to the performance of Accenture Plc. whose revenue per employee was $95,000 but that from Accenture Digital, was $214,286. Accenture’s fiscal year ends on 31 August.

“If you are merely transferring some applications on cloud or, say, helping them (clients) by having some data scientists make sense of data sets, then is it digital (revenues)? I don’t think so," said a Mumbai-based analyst at a foreign brokerage. “True (digital) work is where you make a client change the way it did business... (for instance) by making use of artificial intelligence platforms that helps a client in reducing time for drug discovery. That is high-margin business. And I don’t see many such projects (for Indian IT companies)," said the analyst, who did not want to be named as he is not authorized to talk to the media.

“Digital transformation is in the eye of the beholder," said Thomas Reuner, managing director of IT outsourcing research at HfS Research. “The industry is still struggling with the narrative as to what this transformation entails. Beyond semantics or definitions, in the context of revenues, the key aspect is to decouple routine service delivery from labour" 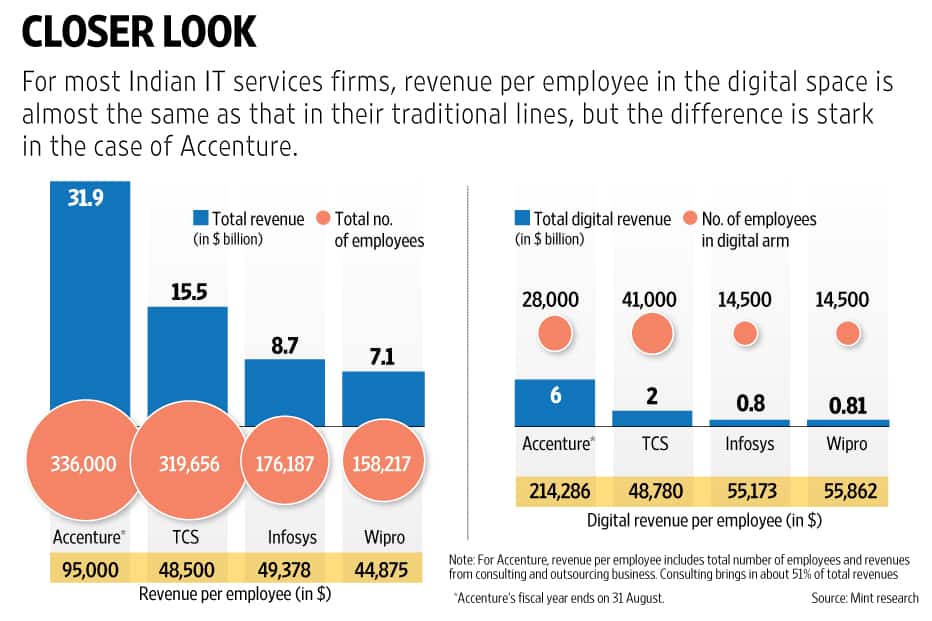 This breaking-away of employee headcount and incremental revenues is clearly not reflected in the performance of Indian IT companies.

“I think the only difference I can tell is the profit margin on these projects. It would appear that the margin achieved is a function of how strategic the projects are. Greater strategic value, higher margin, hence higher allocation of revenue," said Ray Wang, founder of Constellation Research, a technology research and advisory firm.

For Accenture, the company’s ability to generate high-margin business in the digital space is on account of the company’s focus on technology platforms and hiring greater number of employees with PhDs as data scientists.

“If you look in this digital space, we have now roughly 28,000 people working in that environment. And this 28 is very interesting because you will see as you might suspect extraordinary, I would call them high calibres. I’m thinking about the business scientist we are hiring. I’m thinking about the PhDs we are hiring to drive algorithm in Accenture Analytics. And I’m thinking as well about some leading edge designers, we (are) hiring for Fjord, our design group, at Accenture," Pierre Nanterme, chairman and CEO of Accenture, told analysts after the company declared on results on 25 June.

Boffins at homegrown IT firms are coy to spell out the reasons on underperformance in the digital space when compared with global firms. However, some said that they are still evolving and that the difference in revenue per employee at the digital business and enterprise levels will become stark in coming years.

“There is no industry definition of digital. Different companies classify it differently. (But) we (Indian IT companies) are still in early stages and understanding this space," said a senior executive at Wipro who declined to be named as the company is in a quiet period ahead of its earnings announcement on 23 July. “So as we bid for more projects (in the digital space), you will see a clear difference. (For this reason) We have created a digital practice which is different than our analytics and cloud practice," said the executive.

Wipro at the start of this fiscal year made an analytics practice out of the earlier Advanced Technologies Solutions Practice, and also created a separate arm, Wipro Digital. To make sure that it does not classify revenues from computing practice in the digital business, Wipro split the cloud practice between two of its presidents, B.M Bhanumurthy, head of business application services, and G.K. Prasanna, head of infrastructure services.

One reason for homegrown IT companies getting lower margins in the digital space is their higher exposure to work in “digital software development" and “back-end software development to enable new digital processes and products", according to Ralf Dreischmeier, the London-based senior partner who heads the technology practice at the Boston Consulting Group.

“Some work like creation of a new digital architecture and platforms and helping clients in architectural integration into back-end systems are of high value. What clients really want is an end to end value proposition—a third party who can do all the work. Not many players are credible across all activities. And therefore players have to decide—do they build these end-to-end capabilities in-house or are they better off partnering with other players in the ecosystem," said Dreischmeier.