Most of India's salaried class lack either written job contracts or benefits such as provident fund, shows the ICE 360 survey

New Delhi: A fifth of bread-winners in India are salaried employees, a third are labourers, and a little less than half of bread-winners are self-employed, according to fresh data from a large-scale nationally representative survey conducted this year. The ‘Household Survey on India’s Citizen Environment & Consumer Economy’ (ICE 360° survey) shows that the self-employed category is a very diverse category, including highly paid professionals as well as poorer petty traders.

The survey also suggests great diversity in the ranks of salaried workers, with less than half of them having written job contracts, and only a little over a third of them having provident fund (PF) benefits. 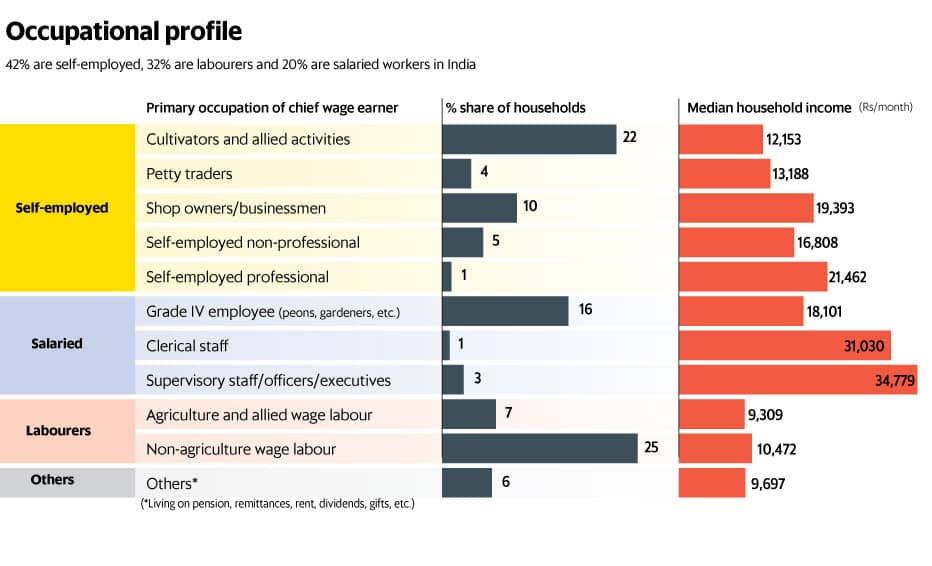 Within the salaried class, grade IV employees (including peons, housekeeping staff, gardeners, etc.) outnumber both clerical staff and supervisory staff (and officers and executives) by a wide margin. Sixteen per cent of bread-winners are grade IV employees, while only 1% are officers or executives, the survey shows.

ALSO READ | 88% of households in India have a mobile phone

Over the past few years, there have been several reports on how post-graduates and doctorates have been applying for jobs of peons and clerks. The ICE 360° survey provides a fair sense of the extent of such under-employment. More than a tenth of grade IV employees are graduates, the survey shows. The share of graduates among grade IV employees (11%) nearly equals the share of graduates among shopkeepers and businessmen (12%). 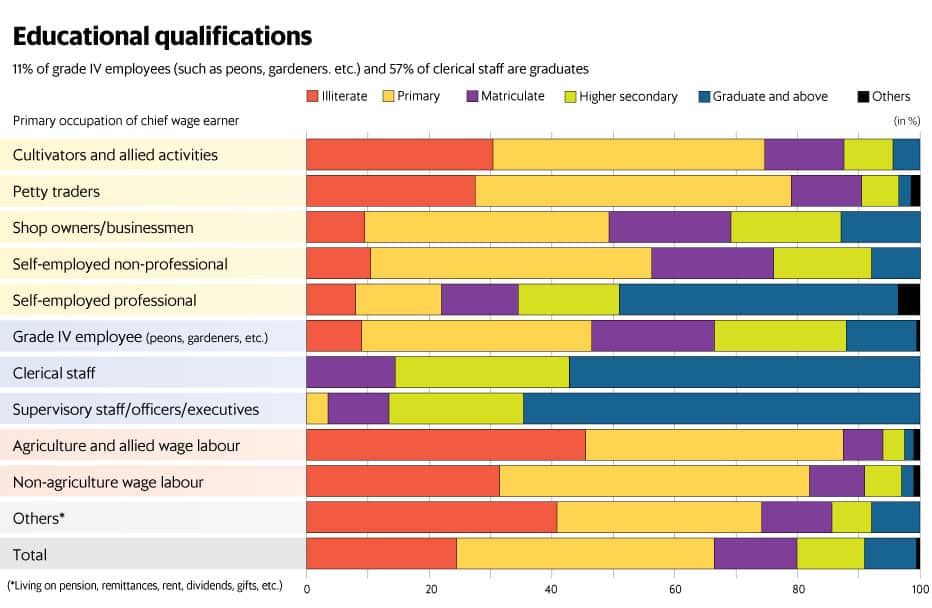 The survey highlights the fragile nature of employment in India. The survey shows that 68% of salaried workers in rural India, and 71% of salaried workers in urban India do not even have a written job contract. The share of workers with benefits such as maternity leave and PF contributions from employers is even lower. Like the class of self-employed workers, the salaried class is also a very heterogeneous group, the survey suggests.

ALSO READ | How much do Indians pay for houses? 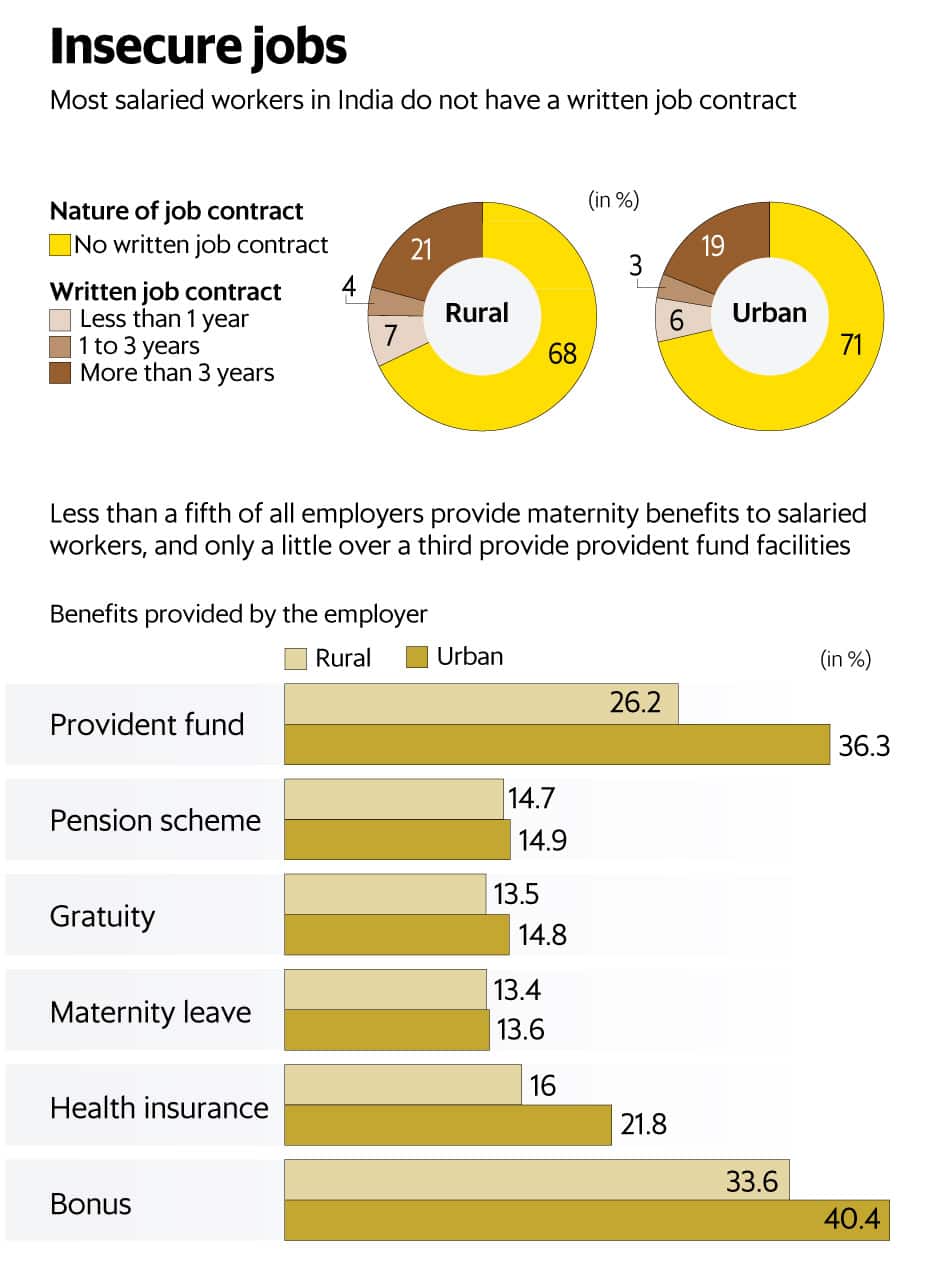 ALSO READ | How much the richest 1% earn and spend 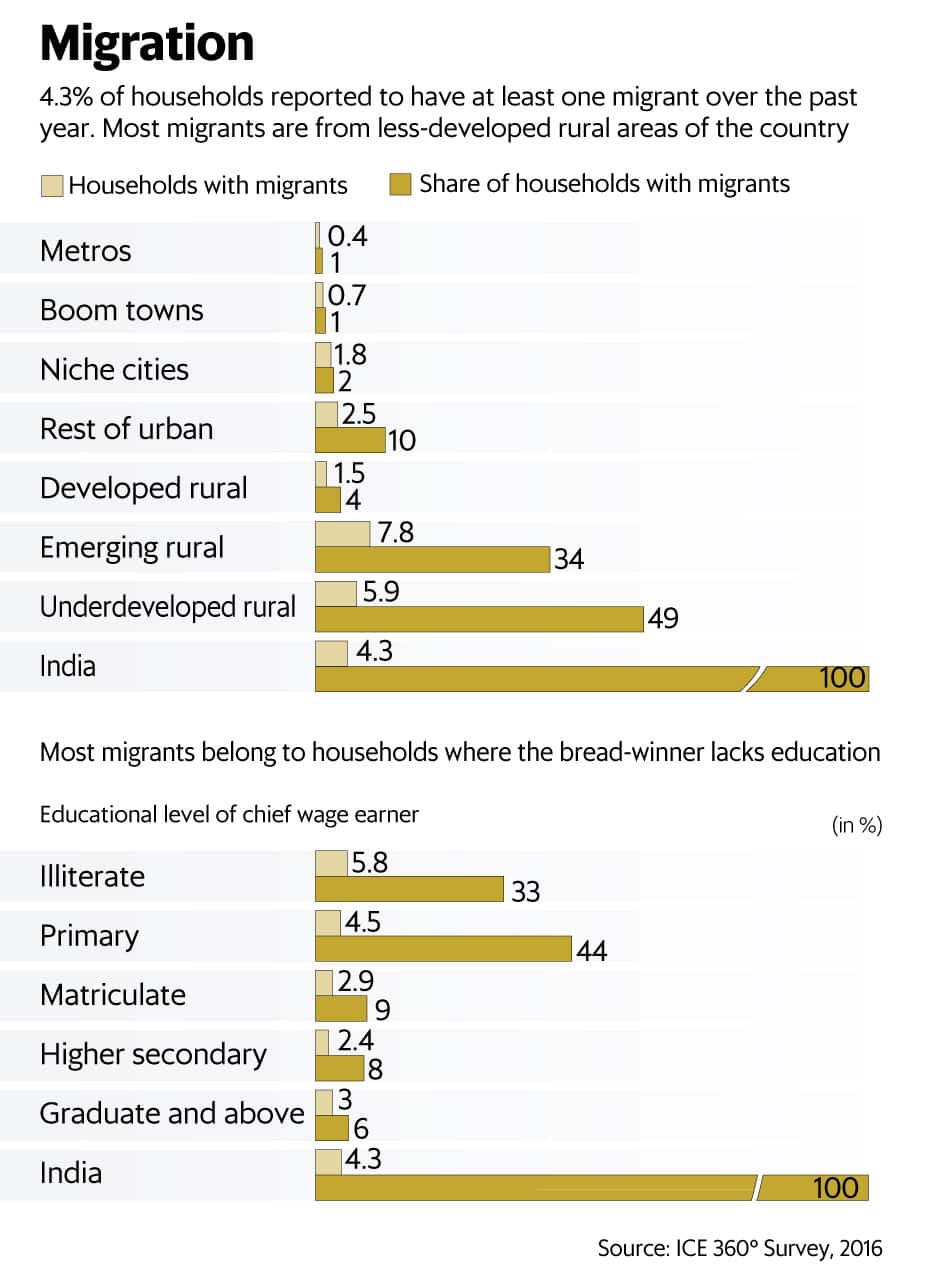 The survey shows that 4.3% households reported having at least one member who migrated to another place over the past year (2015-16). Most such migrants belong to under-developed rural areas and to poor households where the bread-winner is either illiterate or ill-educated. Roughly nine out of 10 migrants reported work-related (or money-related) reasons for migrating. Forty-seven per cent cited “no work" at the current place of residence as the reason for migrating. An additional 37% of those who migrated did so to “earn more money".

This is the fifth of a 16-part data journalism series on how India lives, thinks, earns and spends, based on the latest results from the ICE 360° survey (www.ice360.in) conducted by the People Research on India’s Consumer Economy (PRICE) in 2016. The next part will look at how India spends.